Holiday resort on the New South Wales side of the Gold Coast.

With a sad inevitability worthy of the less attractive and overcrowded destinations on the shores of the Mediterranean (think Costa del Sol or north coast of Crete) the Gold Coast, like some huge and all-consuming monster, is slowly heading south. It crossed from Coolangatta to Tweed Heads decades ago and now, inexorably, it is moving further and further south. Fortunately the local councils are not enthusiastic about high rise - there is a limit of three floors on buildings - and consequently Kingscliff has a similar ambience to Coolangatta fifty years ago. Kingscliff is nestled between the Tweed River (the mouth lies further north at Tweed Heads) and a run of attractive beaches which stretch from Cabarita in the south to Fingal Head in the north.

Kingscliff is located 817 km north of Sydney and 111 km south-east of Brisbane.

Like a number of coastal resort towns, Kingscliff takes its name from a nearby estate. It was variously known as Sutherland Point and Cudgen Headland until 1926 when, evolving into a small coastal holiday retreat, it became known as Kingscliff.

Beach Activities
Body and board surfing, lying in the sun, enjoying the ambience of beautiful beaches, doing a little fishing from the beaches and the rocky headlands, these are all activities which define Kingscliff. It is a charming, largely unspoilt and rather upmarket town which is a desirable holiday destination for those who want to avoid the buzz and excitement of the Gold Coast.

Tropical Fruit World
Tropical Fruit World started in 1972 when Bob and Val Brinsmead purchased a rundown small crop farm with a view to specialising in tropical fruit starting with avocados and including custard apples, mangoes, lychees, guavas, macadamia nuts and papaya. By 1983 it was known as Avocadoland. In 1990 the property was taken over by their eldest child, Judith Brinsmead. In 1995 it became Tropical Fruit World and it is now an agri-tourist destination based around a tropical fruit plantation with over 500 varieties of fruit. A visit includes nine specific specialist gardens.

Tours include "Boat and train rides, an animal farmyard, and a recreation area with putt-putt golf, volleyball, flying fox and games equipment". The place is now so comprehensive that visitors can go to the fruit market, enjoy the Plantation Cafe and Juice Bar, go on a Plantation Safari, enjoy fruit tasting, go on a wildlife boat cruise to the fauna park where the animals can be hand-fed, and ride on a miniature train. It is located at 29 Duranbah Road, Duranbah and is open daily from 10.00 am to 5.00 pm, tel: (02) 6677 7222. Check out http://www.tropicalfruitworld.com.au for greater detail and entry prices.

A Sign With A Sense of Humour
On the beach at Cabarita, just south of Kingscliff, is an hilarious sign which sums up the entire area: "Historic Site. At this precise spot, on the morning of December 12, 1927, nothing of significance is known to have occurred." It is located at the end of Pandanus Parade.

Salt Village
No visit to Kingscliff is complete without a visit to the "unreal" development known as Salt Village just south of Kingscliff. The website http://saltvillage.com.au sums it up by being divided into Dine, Shop, Play, Stay and Live. It is an interesting resort destination, with two Peppers hotels and a number of very classy restaurants, which is an attempt to create a new, all-encompassing, resort and living environment. They even have their own surf club. Visit and be amazed ... or horrified.

Cudgen Nature Reserve
Lying 11 km south of Kingscliff, via the Tweed Coast Road, is Cudgen Nature Reserve which covers an area of 671 ha. The main attraction is Cudgen Lake which has barbecues, a boat ramp and picnic tables. It is ideal for canoeing, kayaking, windsurfing and sailing. To the south is Round Mountain and to the west is Wollumbin Mount Warning. Round Mountain provides excellent views across the lake, the ocean and the hinterland. An Aboriginal stone quarry is located on the edge of the lake and the area remains of significance to local Aborigines. There are excellent views of Mount Warning from the lake's eastern shore on a clear day. The reserve contains a rich variety of vegetation types which are home to a number of threatened plant and animal species. The reserve also supports a large koala population (reputedly the last in the region). For more information check out http://www.nationalparks.nsw.gov.au/cudgen-nature-reserve/cudgen-lake.

* Prior to the arrival of Europeans the Bundjalung Aboriginal people lived in the area for thousands of years. The area was so rich in food that they did not move great distances. There is evidence they travelled once a year to the Bunya Mountains west of the Sunshine Coast for the annual bunya nut gathering.

* In 1770 Captain James Cook, while sailing up the east coast of Australia, named the huge volcanic caldera behind the coast, Mount Warning and, when he nearly hit the local reefs, he called the rocks north of Kingscliff, Point Danger.

* The area was explored by surveyor John Oxley who discovered and named the Tweed River in 1823. He reported on the richness of timber in the hinterland.

* By the 1840s the cedar was being cut and being shipped out on the Tweed River.

* By the 1930s the area further north, particularly Coolangatta and Tweed Heads, was becoming a popular tourist holiday destination. Eventually Kingscliff developed as a quieter alternative. 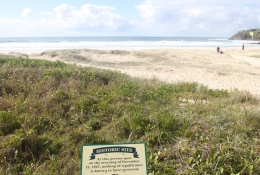 The sign summing up the historic events in the area. 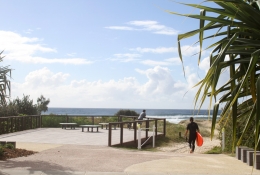 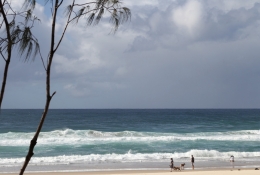 This is what the Kingscliff area is really all about. 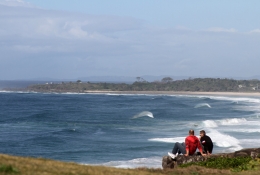 Looking south from the headland at Cabarita 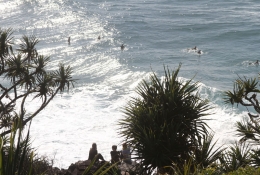 Surfing and watching the surf is integral to life around Kingscliff 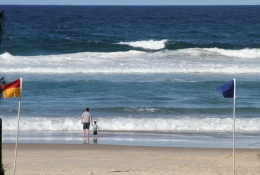 The beach is protected by lifeguards at Salt. 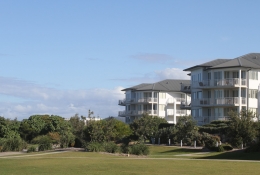 The development along the beach at Salt. 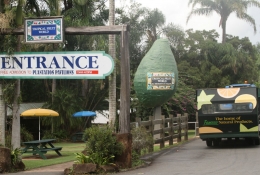 The entrance to Tropical Fruit World 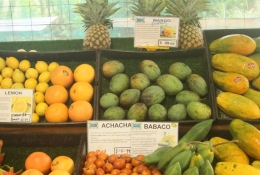 Tropical fruit grown at Tropical Fruit World - all for sale.