Kingston on Murray is a small township (realistically it is little more than a pleasant riverside park and a few houses) on the Murray River which owes its existence to the historic ferry service which plied the river carrying vital supplies across at a point where there was no bridge. The town's importance declined when a bridge was constructed in 1973. So today it lies in the heart of a rich agricultural district and is surrounded by vineyards and orchards. The appeal of the town lies mainly in the attractions in the area - the unusual Cobdogla Irrigation & Steam Museum which is only 7 km away; the RAMSAR wetlands which are part of the Banrock Station Wine & Wetlands Centre; and the historic Overland Hotel on the Goyder Highway.

Kingston on Murray is located 216 km north-east of Adelaide on the Murray River.

Bird Watching
One of the joys of this area of the Murray is the richness of the birdlife. The river, the lakes, the swampland, the lagoons all contribute to making it a very special place for a rich variety of birds including the Nankeen Night-heron, Ducks, Buff-banded Rail, Australian Spotted Crake, Baillon’s Crake, Regent Parrot, Yellow Rosella, Cockatiel, pelicans, cormorants, darters and ducks, kites, wood swallows, spoonbills, wrens, Great Crested Grebe and While-breasted Sea-Eagle. Check out http://www.waikerie.com/waikerie-bird-watching-trail-riverland#banrock for more information.

Moorook
When South Australia was divided up into smaller holdings the Hundred of Moorook was proclaimed in 1893 and Premier Kingston, attempting to solve problems caused by high levels of unemployment and bank failures, encouraged potential settlers to move to Moorook where they could work together in a kind of simple collective. The first group travelled up the Murray River in the P.S. Gem  in 1894 and while the government had provided them with some supplies they were expected to kill kangaroos and ducks and catch fish - in other words, to survive by living off the land. They built a simple village where there was no money for currency and mutual help was mandatory. They planted vegetables and orchards to earn a living and to provide food. By the outbreak of World War I the Moorook experiment had failed. The area was occupied by soldier settlers after World War I.

Moorook Game Reserve
The Moorook Game Reserve is located off the Moorook-Loxton road 4 km south of the Sturt Highway. It is a pleasant game reserve and a well known site for waterbirds. The reserve is made up of a combination of floodplain and wetlands including Wachtels Lagoon and a series of narrow creeks and shallow swamps. Fishing and canoeing are popular recreational activities. The popular Kaliwira Wetland Trail is an enjoyable way to see and learn about wetland environments. Bird species in the reserve include Buff-banded Rail, Great Crested Grebe, Nankeen Night-heron and the rare White-bellied Sea-eagle. Check out http://www.waikerie.com/waikerie-bird-watching-trail-riverland#banrock for more information. For canoeing check out http://www.canoeadventure.com.au/first-blog-post Canoe Adventure offer guided tours.

Loch Luna Game Reserve
Loch Luna Game Reserve comprises a range of water bodies including narrow creeks and shallow swamps. It is a haven for bird lovers and people who want to enjoy the quietness that is part of the still waters beyond the slowly flowing Murray. It is possible to see pelicans, cormorants, darters and ducks and less common birds such as kites, wood swallows, spoonbills and wrens.  There is a canoe trail along Nockburra and Chambers Creek. See http://www.southaustraliantrails.com/pdf/loch_luna.pdf for a map of the route. The endangered Regent Parrot breeds in and around Loch Luna and can often be seen flying across the Moorook area. The dead gum trees are important roosting sites for darters, cormorants and other fish-eating birds, while high in the tree tops, you can find the nests of Whistling Kites. Check out http://www.waikerie.com/waikerie-bird-watching-trail-riverland#banrock for more information. There is a useful Facebook page - Loch Luna Cruises (https://www.facebook.com/Loch-Luna-Cruises-149575115111502/) - which provides information on times and contact details for the eco cruises. Tel: 0449 122 271. For canoeing check out http://www.canoeadventure.com.au/first-blog-post Canoe Adventure offer guided tours.

Cobdogla Irrigation & Steam Museum
Located at Park Terrace, Cobdogla, 7 km east of Kingston on Thames, is Cobdogla Irrigation & Steam Museum. It is an unusual museum which contains the world's only working Humphrey Pump. These gas-driven pumps were used for the early irrigation of the area. They actually operated like a water cannon with the water being propelled by an explosion of gas. The pump is now part of the State's Heritage. With the focus being on early irrigation history and steam powered engineering principals, there is also a 1960 Bagnal Train offering rides through the extensive grounds. There are also dioramas depicting the regions development from pre-white settlement through the early years. For opening and visiting details (the museum has five operating days a year) contact (08) 8588 7055. Check out the website for further details: http://www.cobdoglasteammuseum.com.au.

The Overland Corner Hotel
Located north of Kingston on Murray off the Goyder Highway, this historic hotel was built in 1859 on a site - 'Overland Corner' - which had become a popular resting place for drovers moving huge numbers of sheep across to South Australia from New South Wales. It was commissioned by John Chambers, a successful pastoralist and built by William, Henry and George Brand. Red gum, which has been cut into tiles, has been used as the flooring in the bar. It was purchased by the National Trust in 1965 and consequently the building can’t be altered. Its importance lies largely in the fact that it is the first stone building in this area of Australia.
Not surprisingly the hotel has been the site of a number of adventures and mishaps. It is said that Captain Moonlite, the well known bushranger, rode his horse into the bar. In the early 20th century it was the local mail receival point and in the 1920s German settlers used to use it for dances
There are historic graves in the area and there are also remnants of an old copper mine. The pub was actually flooded in the 1950s and there is a large levee bank protecting it from the Murray’s flood. The river is a 670 metre walk from the pub. There is a walking trail which starts from the old Hotel. Brochures can be obtained from the bar. For more information tel: (08) 8588 7021 or check out http://www.overlandcornerhotel.com.au.

Banrock Station Wine & Wetlands Centre
Banrock Station, on Holmes Road off the Sturt Highway to the northwest of Kingston On Murray, is a rare combination of a cellar door and a serious environmental project. The 1375 ha property proudly declares “Good Earth … Fine Wine … Banrock Station – Wines, Walks, Wildlife, Wetlands” and a percentage of the “proceeds of every wine sale” is contributed to “conservation projects around the globe”. The station is divided into six landscape zones. The Wine and Wetland Centre and car park (Zone 6) is where wines produced from the station’s shiraz, cabernet sauvignon, merlot, semillon, chardonnay, Doradillo, riesling, viognier, grenache, malbec and montepulciano grapes can be tasted and where, in a beautiful setting overlooking the wetlands and floodplains, an excellent restaurant offers unique South Australian produce. The property is divided into five zones. Zone 1 is the surrounding Mallee, Zone 2 is the wetlands and Zone 3 is the floodplain. Zone 4 is the Murray River and Zone 5 is the 236 ha vineyard.
Banrock’s two lagoons cover 250 hectares (main lagoon – 120 ha, eastern lagoon – 130 ha); boast eight kilometres of trails including 800 metres of well maintained boardwalk across the lagoons which is suitable for wheelchairs and people with a preference for very gentle strolling; have four bird hides where, on comfortable seats, the visitor can gaze across the peaceful lagoon waters at the pelicans, purple swamphens, black swans, little pied cormorants, yellow-billed spoonbills and Pacific black ducks which, as the Banrock walking brochure so colourfully explains, use the lagoon as their “nurseries, filters, shock absorbers and supermarkets”.
It is a compliment to Banrock’s current owners that they not only employ full time rangers and spend millions maintaining their wetlands but they have, since 1994, been restoring “the mallee, woodland, wetland and floodplain environments” so that today wine lovers can enjoy a superb meal with award winning wines and spend hours wandering through lands now committed to protecting the habitat for threatened species and migratory birds. The result is a memorable and worthwhile experience.

Lock 3 - on the Murray
One of the best Murray River experiences is to visit a lock and watch the cruisers and houseboats as they make their way through the lock system. Lock 3 was completed in 1925. The Lock and Weir are one of 12 between Blanchetown and Euston (NSW)/Robinvale (Victoria). A majority of locks were constructed between 1922 and 1935. Each weir has a lock constructed next to it, to facilitate navigation. The Locks and Weirs are managed by SA Water on behalf of the Murray Darling Basin Authority. Water craft use the lock for navigation and its use is free.

* Prior to the arrival of Europeans the area was settled by the Maru Aboriginal people.

* The Hundred of Moorook was officially created in 1893.

* The area was settled by Europeans in the late 1890s as part of a "new village" program which sent people to settle the district.

* The town was named after Charles Cameron Kingston who was Premier of South Australia from 1893-99.

* The town was officially named Thurk, the name of the property where the town now stands, in 1918.

* The first bridge across the Murray River at Kingston on Murray was opened in 1973.

There are no useful websites relating to Kingston on Murray. 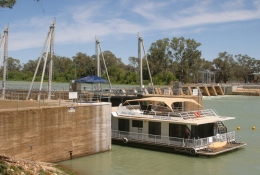 A holiday cruise boat enters Lock 3 near Kingston on Murray 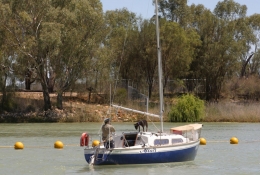 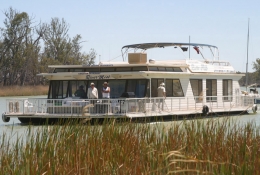 A houseboat on the Murray River near Kingston on Murray 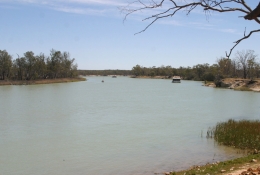 The Murray River near Kingston on Murray 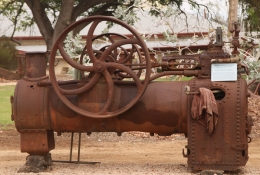 A boiler, part of the extensive display at the Cobdogla Irrigation and Steam Museum near Kingston on Murray. 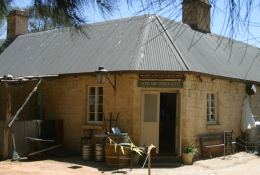 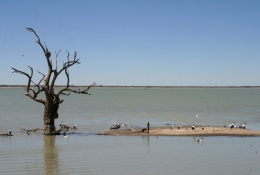 Birdlife on the lake at Banrock Station. 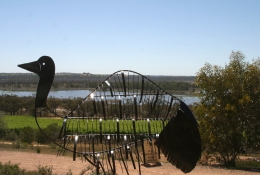 The view from the restaurant across the wetlands at Banrock Station.