A wheatbelt town with one of the best local museums in the country.

Kojonup is a typical, modest wheatbelt town with a fascinating history dating back to the establishment of the Military Barracks (1845) and including, located beside the Visitor Information Centre, the Kodja Gallery and The Story Place, one of the most outstanding museums and celebrations of a community to be found anywhere in Australia.

Kojonup is located 264 km south-east of Perth via the Albany Highway. It is 305 m above sea level.

In the Kodja Gallery there is a separate exhibit of a kodj, an authentic Nyoongar stone axe, with the explanation that: "Kodj = axe; up = place of water: Kodjonup." In the district there are numerous granite outcrops which were probably the sources of axe blades.

The Kodja Gallery and The Story Place
The Kodja Gallery and Story Place is connected to the Visitor Information Centre. There is an excellent brochure provided and it is free. Allow yourself an hour to read and study all the captions and information. It offers a unique and comprehensive insight into the life of the town from the time when the Nyoongar people moved through the area to the modern day when Kojonup is a thriving wheatbelt town. The theme of The Kodj Gallery is "one story, many stories". At the entrance is the Craig Mcvee painting "Noongar Seasons" which records the story of Mardjit (the snake) who created the water holes, streams and creek beds in the area. There is a full explanation on the brochure. Look down and you will see the footprints of local animals with their Aboriginal names and there are three solid lines which represent the stories of three women - Yoondi, a local Nyoogar woman; Elizabeth, an early settler; and Maria, an Italian settler. Their stories move from the gallery into the Rose Maze. The highlights of the Gallery include a kodj (stone axe) which gives the town its name; a fascinating collection of both Aboriginal and early settler tools (look for the unique shepherd's crook, the equipment used for measuring a "chain", and the specific spear designed for fishing) which are all identified on a handy sheet which describes the origins of each piece of equipment; "The Bush" with its stumps and tammar wallaby skin rugs; the Holden Ute and its emotional and powerful description of how the black/white divide was bridged by football ("We were alway stuck in the back bar, that's the way things were in those days. But after a match one night in '73, the coach called Stephen Michael and me into the front bar and said to the publican these are two of the best in the League. This is just not on - these blokes are going to drink in the front bar with all the rest of us. And that was the end of it ... after that we all drank together."); and the replica of an Aboriginal house on the local reserve.

Australian Rose Maze
If you arrive in season you will be overwhelmed by the heady scent of the roses all of which are Australian bred and have such amusingly local names as Sunny South, Australia Felix, Squatter's Dream, Onkaparinka and Kwinana. But this is more than just a wonderland of local roses, it is a superb maze where, by reading the signs and progressing further into the maze, you learn about three women - Yoondi, a local Nyoogar woman; Elizabeth, an early settler; and Maria, an Italian settler. There are gems of insights into their lives. A personal favourite is Maria recounting how her husband complained that her pasta was not as good as his Mama's pasta. Her reply: "Your wheat isn't as good as the wheat she was using." It deserves to be explored slowly. The stories are fascinating. There is an excellent brochure available at the Visitor Information Centre.

Centenary of Federation Wool Wagon
Over the road from the Visitor Centre is the Centenary of Federation Wool Wagon (a 1.5 sized replica) which celebrates the importance wool has played in the history of the town and the district. The wool industry started in the area in the 1860s and by 1969 over one million sheep were being shorn in the Kojonup Shire. Wool wagons were used to transport wool to the markets and depots. The wagons were pulled by horses and the loading of the bales required both skill and strength.

Kojonup Spring
The Kojonup Spring lies at the western end of Spring Street which runs off the Albany Highway at the top end of town. It is an oasis in summertime with a pleasant bridge, a well and a healthy supply of water which, not surprisingly, is recognised as a vital element to the settlement by Europeans and the source which drew the local Kaniyang Nyoongar people to the area.

Kojonup Military Barracks
Just up the hill from the springs, and clearly signposted, are the Kojonup Military Barracks which were built in 1845 by soldiers of the 51st Regiment. The barracks offered protection to travellers on the isolated road between Perth and Albany. A placard outside informs visitors that it was: "Built in 1845 by soldiers of the 51st Regiment. Many of the colony's most prominent pioneers spent a night within these walls. In 1850 the barracks was occupied by the Pensioner Force until it was disbanded in 1880. It has been used as Kojonup's first school, church services, local dances and a private dwelling. In 1963 it was purchased by the Shire Council and given to the Historical Society as a museum. Classified by the National Trust."
Although the walls of the barracks are thick and the windows are small the basic design of the building is more like a Scottish crofters house than a fortress.

Elverds Cottage
Located in Soldier Road, Elverds Cottage was built in 1854 by William McDonnell. The sign outside explains that: "The cottage was built in 1854. The original building was two rooms which were 14 ft x 13 ft built of stone, roofed with strong bound timber and well thatched. The property was acquired by the Elverd Family in the 1880s. It was donated to the Historical Society by Mr C Harrison, nephew of Mr Charles Elverd." Over the years the thatch has been replaced by corrugated iron. There are no regular times of opening. The Visitor Centre can arrange entry.

* Prior to European settlement the district was occupied by the Kaniyang Nyoongar people for thousands of years.

* The settlement was established in 1837 when the surveyor Arthur Hillman, who was surveying a road between Perth and Albany, was directed to the Kojonup spring by the local First Nation peoples.

* People started travelling through the town when the Perth-Albany road had been completed. The original barracks were established in 1837 to protect these travellers.

* Settlers attempted to graze sheep in the 1840s but this proved unsuccessful when poisonous plants decimated the herds.

* The first crop of wheat was successfully grown in 1850.

* By 1868 the Commercial Hotel was open for business.

* The town looked as though it was going to become an important regional centre but in the late 1880s the Government decided not to route the Great Southern Railway along the Albany Highway and consequently Katanning, which was on the rail line, prospered and Kojonup declined.

* By 1969 over one million sheep were being shorn in the district each year.

* In 1999 the white and First Nation communities formally agreed that the Kojonup Spring had a shared spiritual, cultural and historical significance.

* Today Kojonup is a service town for the surrounding wheat, barley and sheep grazing area.

There is a useful local website - https://www.kojonupvisitors.com.au - with detailed information about the town. 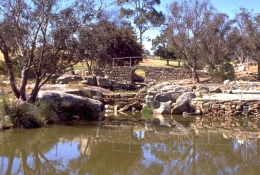 Kojonup Spring - the lifeblood of the town. 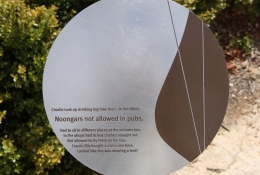 The signage in the Rose Maze tells a harsh, true story of life for the women in the town. 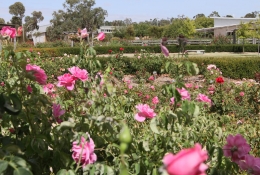 The Australian rose maze at the Kodja Place. 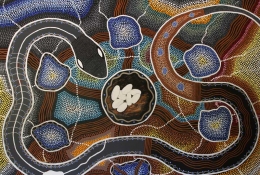 The mural - Noongar Seasons - depicts the snake which created the water holes, streams and creek beds. 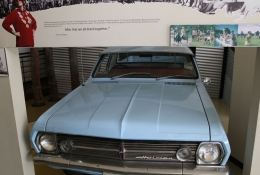 The quintessence of Australian rural life - the Holden ute - now replaced by 4WD and a wonderful story about how sport bridged the town's racial divide. 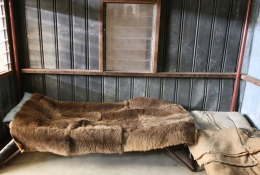 The Reserve House at the Kodja Place - a rare look at Aboriginal life on the Western Australian reserves between the 1930s and 1970s. 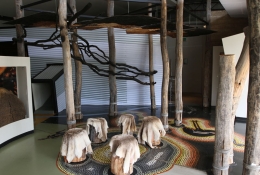 "Pull up a stump" - The Bush section of the Kodja Place with tammar skin rugs on the stumps. 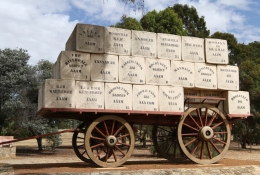 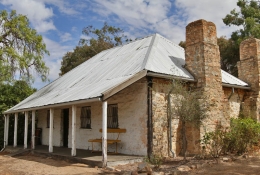 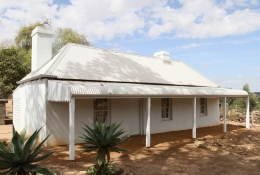