Kondinin is a small wheatbelt town servicing the surrounding sheep and grain farming land where wheat and canola are grown. The main attractions in the district are the natural features and the fauna and flora. It is an area noted for its wildflower displays which occur between September and October, the lookout at Yeerakine Rock and the impressive Kondinin Lake.

No one is sure about the origin of the name. It was adopted to describe the lake - hence Kondinin Lake - and when the town grew up it was duly named after the lake but no one is sure what 'kondinin' means. It was a local Aboriginal word first recorded by Surveyor General John Septimus Roe in 1848.

Sculpture Park and Sculptures
Located near the Sports Oval, off Graham Street, the Sculpture Park is a result of exhibits displayed during the annual Kondinin Art Prize. Check out https://www.kondinin.wa.gov.au/file/Kondinin_Art_Trail_Brochure__Inside_pages1.pdf which provides a downloadable brochure which lists 14 art works around the town.

Six Seasons Noongar Poles
Located in the Community Garden Nature Play area on Graham Street, these Noongar Poles were created by the community. It was led by former resident Ashley Collard (he was named NAIDOC Indigenous Artist of the year in 2013) and the poles represent the six seasons - Birak (December-January), Bunuru (February and March), Djeran (April and May), Makuru (June and July), Djilba (August and September) and Kambarang (October and November). For more information about the seasons, check out https://www.derbalnara.org.au/boodjar-six-seasons.

John Septimus Roe Mural
Located near the Sports Oval in the Information Bay, off Graham Street, the mural records the journey of the Surveyor General, John Septimus Roe, who travelled through the area and paused at Yeerakine Rock. For more information check out https://monumentaustralia.org.au/themes/landscape/settlement/display/95323-john-septimus-roe.

Bush Trail
Located behind the Railway Station, this short walk passes through 54 ha of woodland which lies between the railway line and Connell Street.

Yeerakine Rock
Located 13 km south of Kondinin via the Williams-Kondinin Road, Yeerakine Rock, like so many rocks in the wheatbelt, was initially used as a vital supply of rainwater. It was first sighted by Europeans when John Septimus Roe travelled through the area. It offers excellent views across the wheatfields and has a pleasant shady picnic area at the base. It is also an excellent starting point for those wanting to explore the wildflowers in the district. Located at the top of the rock is the Light Horseman Statue. It was installed in 2015 to mark the centenary of the ANZAC and recognises those from the Kondinin district who served in the 10th Light Horse Brigade in World War I.

Sculptures in the Salt Lakes
Located 10 km west of the town on the Corrigin-Kondinin Road, this sculpture, which is titled "Waiting for Hay" was created by Kelly Browning, a local farmer, using star pickets. The images created are 'Clearing the Land', 'Waiting for Rain', 'Shearing the Sheep' and 'Inspecting the Crop'. The lake, known locally as the Statues Lake, is also a special place. At various times of the year it turns a brilliant yellow/green as a result of the formation of algae. It reputedly commonly happens around November.

* It is estimated that the granite outcrops in the area were formed around 2.63 billion years ago.

* Prior to the arrival of Europeans  the area was home to the Njakinjaki Aboriginal people.

* The first European through the area was the Surveyor and Explorer, John Septimus Roe, on his 1848-1849 expedition.

* The first Europeans in the area was sandalwood cutters who moved through searching for the precious timber.

* The first European settler was Michael Brown who took up land in the district in 1905.

*  A railway line was built from near Narrogin, and Kondinin was created as a railway stop in 1915.

* A railway between Kondinin and Hyden was built in 1930.

* In 1955 the Kondinin Group was created in the town to study farm machinery.

There is a useful local website. Check out https://www.kondinin.wa.gov.au/top/tourism. It has useful guides to the town. 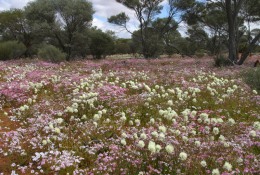 Vast areas around the town and covered in wildflowers 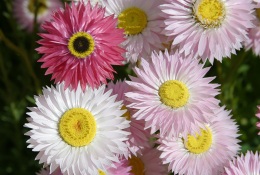 The jusifiably famous paper flowers in the spring 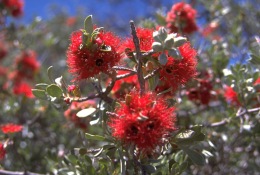 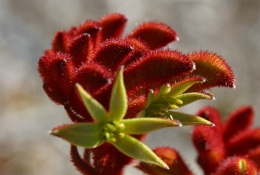 A beautiful Kangaroo Paw which can be seen around Kondinin in spring.