Town opposite Barham on the banks of the Murray River.

Koondrook is a quiet town whose economy is driven by the timber timber, dairying and citrus fruit industries on the surrounding rich river plains of the Murray River. Today it has become a popular inland holiday destination for families and anglers as their is excellent fishing for Murray cod, golden perch, carp, silver fish, catfish and yabbies as well as canoeing on the river and bushwalking on Gunbower Island.

It is possible that 'koondrook' meant 'where the two rivers meet' in the language of the local Wemba-Wemba Aborigines.

The Koondrook-Barham Redgum Statue Walk
A good reason for exploring the parks and walkways along the Murray River is the unusual Koondrook-Barham Redgum Statue Walk. This is a rustic "art form" which is hugely popular in the redwood areas of the United States - Alaska and the northern Pacific states - but still quite rare in Australia. Barham and Koondrook are trying to correct that. There are now fifteen statues (two in Barham and 13 in Koondrook) including such notables as Alexander Arbuthnot (located just outside the Arbuthnot Sawmill), a range of local "characters" and iconic local animals as a Murray Cod, kookaburra and wedge-tailed eagle. The walk was started in 2002 and a new statue is added each year. There is a brochure with details of each sculpture available at the Golden Rivers Country Visitor Information Centre in Barham. At the moment the path goes from outside the Visitor Information Centre across the Barham bridge and down the Victorian bank of the Murray to Koondrook and the top of Gunbower Island.

Barham Bridge
The bridge which crosses the Murray between Koondrook and Barham is one of the oldest on the river. It was built in 1904 and was constructed so that the central section could be lifted so that paddlesteamers plying the river between South Australia and Echuca could pass under the bridge. From 1904 until it was mechanised in 1997 the lift section of the bridge was raised and lowered by two men using a system of pulleys and weights. Today it is rarely raised but it is operational.

Punt Road and Arbuthnot Sawmill
Punt Road, named because a punt operated from 1884 until the Barham bridge opened in 1904, was the main road leading down to the river crossing. The punt can still be seen, along with a number of wrecks, when the river is low. It was also here that barges and paddleboats were constructed between 1881 and 1923. A remarkable relic of the town's boom period in the 1880s and 1890s is the Arbuthnot sawmill, which was built in 1890 for Alexander Arbuthnot and which is still operational today. It is possible to inspect the workings of the sawmill. A walkway was constructed in 1998 and entry to the sawmill can be organised at the offices over the road at 18 Punt Road, tel: (03) 5453 2401.

The Log Buggy
On the corner of Main Street and Punt Road is an old log buggy owned and operated by William Thomas Grass. It was built around 1930, was hauled by bullocks, and was used to carry logs from the local forests to Arbuthnot Sawmill.

The Koondrook Tramway
In the middle of Main Street is the Koondrook Tramway Station. It was not built until 1913 although the rail line opened in 1889. The track beside the station now holds some interesting old rolling stock from the Kerang & Koondrook Tramway which, when it was first constructed, carried produce and passengers between Koondrook and the railhead at Kerang. It closed in 1978.

* Before the arrival of Europeans the district around Koondrook was occupied by the Wemba-Wemba Aborigines.

* After the goldrushes of the 1850s Victorian settlers began to move to land on the Murray and by the 1870s Koondrook had developed as a service port for the paddlesteamer trade. At this point there was no bridge across the river and consequently Barham was less important.

* shipbuilding began in 1881 and between then and 1923 a total of seven paddlesteamers and six barges were built on the river.

* A tramway was established in 1888-89. It connected Koondrook with the railhead at Kerang.

* Arbuthnot Sawmill started operating in 1889 and an irrigation pump site was opened in 1890.

* The local dairy industry saw the first creamery opened in the district in 1892. Its operations were transferred to the Koondrook butter factory in 1906 .

Koondrook does not have its own information centre. Across the bridge in Barham is the The Golden Rivers Country Visitor Information Centre which is located at 15 Murray St, Barham tel: 1800 621 882.

There is a range of eating options across the bridge in Barham including both Chinese (Chinese Garden) and Thai (Happy Elephant) restaurants and a good club with good club food.

There is a useful local website - http://www.koondrook.com.au - which provides information about market days, local history and attractions. 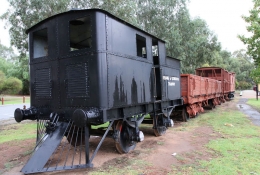 The Kerang & Koondrook Tramway which started running in 1889. 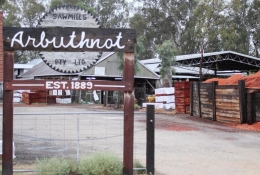 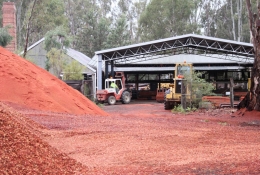 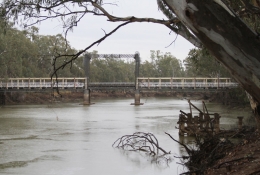 The lift bridge over the Murray River from Koondrook to Barham