Koorda is a small wheatbelt town which promotes itself as 'corn dolly country'. This unusual English custom of plaiting straw was brought to the area by Frank Lodge from northern England who arrived in 1911 and continued plaiting until his death in 1962. In 1982 the local show held Australia's first Corn Dolly Festival. The appeal of the town lies in the town's two museums - the local museum in the old hospital and a private museum with motoring and military memorabilia - and a number of granite outcrops which are such an integral part of the Western Australian wheatbelt.

Koorda is located 233 km north-east of Perth via Goomalling and Dowerin.

Koorda is one of many examples in Australia of Aboriginal names with no connection to the local area. In 1914 a proposed railway siding where the town now stands was named Koorda at the suggestion of J Hope, the Chief Draftsman in the Lands Department. Hope took the name from a list of words obtained from an Aborigine in the Margaret River area. The meaning was reputedly a "married person".

Koorda Museum
Located in Ningham Street, the Koorda Museum occupies the town's old hospital. It has taken its theme from the building's previous usage and consequently has interesting displays of old hospital equipment. Two rooms have been set up to represent hospital wards of that time, with old hospital beds, children's cots, scales for weighing babies and items used in the operating room. There is a doctor's surgery which includes surgical equipment donated by the first doctor in the district, Dr Len Chester, who practiced in Koorda between 1932-1935. It also has an extensive collection of photographs and a display of women's fashions. There is also a collection of locally sourced domestic and agricultural (early farming) equipment. For more information tel: (08) 9584 1297; 9684 3024; 9684 4024; 9684 1446 or 9684 1349 or check http://aumuseums.com/wa/koorda-museum.

Koorda Motoring and Military Museum
Located at 28 Allenby Street, the Koorda Motoring and Military museum features a variety of original classic and muscle cars, memorabilia, "garaganalia" and models. It also has military displays from the Boer War to Afghanistan. For more information tel: (08) 9684 1787 or check out https://www.facebook.com/pg/KoordaMotorMuseumAndMilitaryCollection.

Granite Outcrops in the District
There are four interesting granite outcrops near the town - Mollerin Rock (to the north of the town), Newcarlbeon Tank (also to the north), Badgerin Rock (to the west) and Moningarin Gnamma Hole (to the north-west). Each is a special place with its special wildflower displays between July and October, its native birds and small animals. Moningarin has native gnamma holes. To reach each of the rocks download the excellent Shire of Koorda map at http://www.koorda.wa.gov.au/uploaded/files/client_added/Shire%20of%20Koorda.pdf.

Corn Dollies and Corn Dolly Celebrations
The Corn Dolly is an ancient European craft which reflects a pagan belief that a spirit lived in the cornfields. To preserve the spirit at harvest time a corn dolly was woven so that the spirit could rest while the "corn" (wheat, barley) was being cut. The Koorda Shire adopted the Corn Dolly The Simple Countryman's Favour as the Shire Emblem in 1974. It was Frank Lodge who brought the art of corn dolly making to Koorda in 1911, from Durham in England. Since 1982 it has been promoted by the Koorda Corn Dolly Festival in September. There are corn dolly workshops for those who wish to plait a corn dolly. Contact Lesley McNee (08) 9682 1025 or Dorothy Crogan (08) 9684 1259.

* Prior to the arrival of Europeans the district was home to the Nyaki-Nyaki Aboriginal people.

* The area was first explored by Surveyor General J. S. Roe in October 1836 when, in his travels beyond the Avon Valley, he camped a few kilometres north of the present townsite.

* By the 1840s there were shepherds and sandalwood cutters in the area although there was no permanent settlement until the 1860s.

* By the 1860s there were a few isolated farm in the district.

* In the 1890s the premier, Sir John Forrest, instituted programs to bring settlers to the area - this gave settlers 1,000 acres (445.5 ha) and they had to build fences and improve the land.

* In 1907 Joseph Martin and John Henry Cooke set up camp and this was the beginning of a township.

* In 1911 a severe drought led to the sinking of wells in the district.

* Frank Lodge arrived in 1911 and introduced corn dolly making to the district. He continued plaiting until his death in 1962.

* The railway from Wyalkatchem was gazetted in 1917. A siding named Koorda was built.

* By 1917 there was a general store, post office, blacksmith, butcher, baker and greengrocer in the town. A hall was built by the settlers that year.

* The Koorda Road Board was instituted in 1928.

* The Shire Administration building was opened in 1976. 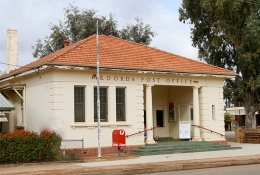 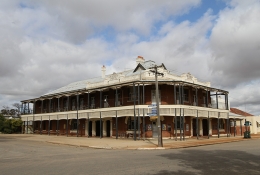 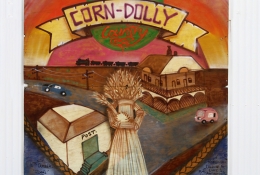 A mural sums up the town - a hotel, a post office, a train and a corn dolly 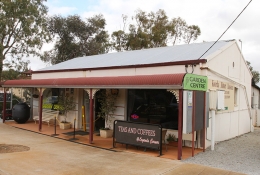 The entrance to the Koorda Motor Museum 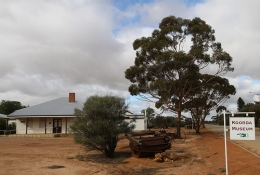 The Koorda Museum - a collection of hospital buildings 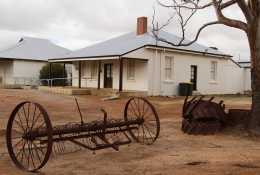 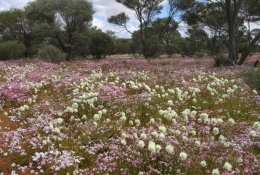 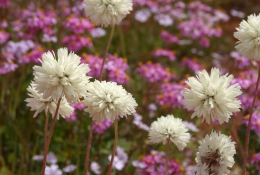 A spectacular display of everlastings near Koorda