Historic town on the edge of Tower Hill, an extinct volcano. It describes itself as an "Irish Village".

Koroit (pronounced "k'royt") is a charming rural town surrounded by rolling green pastures on the northern slopes of Tower Hill, a long dormant volcano. The settlement is situated just a few kilometres north of the Princes Highway and 18 km north-west of  Warrnambool. It has a number of significant heritage buildings and pleasant Botanic Gardens. The surrounding agricultural land is known for its potatoes, onions and dairying.

Koroit is located 275 km west of Melbourne via Geelong and Mortlake.

Koroit is an abbreviation and simplification of the name of the Aboriginal people who lived in the area and were known as the Koroitch Gundidj.

A Walk Along Commercial Road
If you are interested in examining the town's architectural heritage, start at the State School in Commercial Road, just east of the intersection with High Sreet. The school was established in 1878. The present building dates from c.1890. This walk takes you down the main street observing the interesting buildings as you walk. To the left are the courthouse (1872) and the police station which was originally built c.1885 as a police residence. On the corner is the post office which carries a plaque recalling the early postmistress Marie Richardson, the mother of novelist Henry Handel Richardson. In Ultima Thule (1929), the third part of her great novel The Fortunes of Richard Mahony, Richardson has a town named 'Gymgurra' which was based upon Koroit. In it she refers to the post office "built of an iron-grey stone that was almost as dark as the earth itself ... with on its front the large round clock by which the township told the time". The western and central sections were built in 1872 as a residence and telegraph office.
Across the road from the post office, at 100 Commercial Road, is the Olde Courthouse Inn - a former hotel built in 1901 to carry on the licence granted to the Dunfermline Inn which was built on an adjacent site in 1857. The Courthouse Inn is now a bed-and-breakfast.
On the south-western corner of Commercial Road and High Street is Mickey Bourke's Koroit Hotel, erected in 1853 (some sources suggest 1856). At that time it was a simple two-storey bluestone structure. The elaborate Art Nouveau facade, which makes it the most distinctive building in the street, was added in the early 1900s.
Just beyond the Koroit Hotel, on either side of Commercial Road are two banks. The National Bank which was erected as a single-storey structure in 1868 - The facade and upper storey were added in 1872 - and the State Bank of Victoria which was originally constructed in 1876 as a doctor's residence. It became the Colonial Bank of Australasia and, in 1920, the State Bank.

Koroit Botanic Gardens
Proceed south along High Street from the Koroit Hotel - on the right are the Botanic Gardens which were constructed on land set aside in 1862. They are an ideal place for a picnic. They were designed in 1880 by William Guilfoyle who at the time was the curator of the Melbourne Botanic Gardens. He designed the winding paths and sweeping lawns. Today only five conifers remain from the plantings that took place in the 1880s. However the gardens do have some genuine rarities. Six of the trees are registered with the National Trust and the Dragon's Blood Tree is on the World Rare and Endangered List.

Rosebank
At the southern end of town, on Lake View Road (just west of the intersection with Anzac Avenue), is 'Rosebank' which started its existence as a stone cottage erected in the 1850s. Substantial additions were made later in the 19th century. It is a Classical Revival stuccoed structure which was built for David McLaws who moved into the area from Port Fairy. He was the original licensee of the Koroit Hotel.

Tower Hill State Game Reserve
Tower Hill is a volcanic crater with a lake and layers of solidified volcanic ash. The crater is a nested maar crater (A maar is a broad, low-relief volcanic crater caused by an explosion which occurs when groundwater comes into contact with hot lava or magma). A maar characteristically fills with water to form a relatively shallow crater lake which may also be called a maar.  The crater is believed to have been formed about 32,000 years ago. Maars are formed when hot lava comes into contact with cold ground water resulting in many explosions hurling rock, scoria and volcanic ash into the air. Most of the material falls around the rim of the crater creating layers of volcanic tuff - rock, scoria and stones – which create a broad, relatively flat volcanic crater. They are not associated with lava flows.
Maar craters like Tower Hill are broad with an almost level crater floor as the magna or lava would have cooled as soon as it came into contact with ground water. Later activity in the maar crater led to several smaller volcanic cones (scoria cones) appearing in the crater floor. The soils are fertile and there was thick vegetation on Tower Hill but this was cleared by the early European settlers. The crater edges were denuded. In 1892 it was declared as Victoria’s first National Park. The crater is 4 km long and 80 metres high.
Tower Hill State Game Reserve (614 ha) is situated in the funnel-shaped crater which was later filled by the lake with its various small islets. Artefacts found in volcanic ash indicate Aboriginal occupation from the time when the volcano was still active. The first known Europeans to sight the hill were the party of the French explorer, Nicolas Baudin, in 1802.
A detailed 1855 painting of Tower Hill by Viennese-born artist Eugene Von Guerard depicted a variety of flora and fauna which had virtually disappeared by the end of the 1860s due to the clearing practices of European settlers who used the local soils for agriculture and who grazed cattle on the islands. Remarkably, Von Guerard's painting was used as the basis of a re-vegetation program. The program, which has been going on since 1961, has planted over 300,000 trees. Re-vegetation encouraged the return of wildlife and the reserve is now home to kangaroos, koalas, wombats, sugar gliders, possums, echidnae, numerous waterbirds (including Cape Barren geese, musk ducks, spoonbills and chestnut teals) and emus.
Tower Hill Reserve is located just 3 km from Koroit via Lake View Drive. A signposted turnoff on the Princes Highway leads past a lookout area before it proceeds over a land bridge to an island which is virtually surrounded by Tower Hill Lake. The road then continues on past a picnic area with toilets and barbecue facilities and the Natural History Centre (designed by Robin Boyd), managed by the Worn Gundidj Aboriginal Cooperative, which has displays explaining the geology and history of Tower Hill. The Centre is open from 9.00 am - 5.00 pm weekdays and 10.00 am - 44.00 pm on weekends. The picnic area is the starting point for four short walks around the island:

* the Lava Tongue Boardwalk - a 30 minute wetland walk which leads to a bird hide across a boardwalk.

* the Journey to the Last Volcano - a geological walk of one hour.

* Peak Climb (for orientation and geological purposes) which is a steep 30 minute walk.

For more information check out http://parkweb.vic.gov.au/explore/parks/tower-hill-w.r. There are downloadable brochures on the history of Tower Hill and guides to the walks.

Tower Hill Cemetery
There are a number of interesting, and wonderfully sentimental, gravestones from the Victorian era in this interesting cemetery. The grave of Walter Richardson, the father of novelist Henry Handel Richardson, is one of the most notable graves. Walter, a doctor, came to Koroit in 1878 with his family when his mental and physical health were declining. He died the following year. The first burial in the cemetery dates back to 1856. A notable grave, with a marble column, is that of William McLean which has an inscription reputedly written by Henry Lawson: "Erected by his fellow unionists and admirers in memory of their comrade, William John McLean, who was shot by a non-unionist at Grassmere, New South Wales, during the bush struggle in 1894 and who died 22 March, aged 26 years. A good son and faithful mate and a devoted unionist, Union is strength". McLean had been a victim of the violence associated with the 1894 shearers' strike. The cemetery is located adjacent the Princes Highway, en route to Tower Hill Reserve.

Port Fairy to Warrnambool Rail Trail
The Port Fairy to Warrnambool Rail Trail is a delightful 37 km rail trail which was officially opened at the Koroit Railway Station in 2012. It follows a railway line (now defunct) which was opened in 1887 and was vital for the agriculture of the area having a number of sidings where locals could ship their produce directly to Geelong and Melbourne. The line closed in 1977 and has since been converted into a pleasant cycle track which passes remnants of cattle loading yards and sidings where wheat, oats, peas, beans, potatoes, turnips, hay and grass were shipped out. There is a detailed brochure which can be downloaded at https://www.warrnambool.vic.gov.au/sites/warrnambool.vic.gov.au/files/documents/discover/explore/Port_Fairy_Warrnambool_Rail_Trail.pdf.

* Prior to the arrival of Europeans the area was inhabited by the Koroitch Gundidj Aboriginal people.

* In 1802, when he sailed along the coast, the French explorer Nicolas Baudin sighted Tower Hill from his ship Geographe.

* The first Europeans took up land in the district in 1837.

* The Bolden brothers leased a station in 1840 and they overlanded their stock to the site in the company of novelist Rolf Boldrewood (real name: Thomas Alexander Browne) who, it is argued, based 'Terrible Hollow' (from his most famous novel Robbery Under Arms) on nearby Tower Hill.

* The Boldens were followed by the Ryrie brothers and David McLaws who later built the Koroit Hotel.

* An Irishman William Rutledge took up 5,120 acres in the 1840s. He imported Irish labourers to work on his property at a time when the Irish potato famine was driving his countrymen and women to look for opportunities abroad. Settlers from Scotland and Yorkshire also emigrated to the area at this time, although the Irish contingent dominated at Koroit. Most of their efforts were directed towards the potato which had failed them at home and Koroit became known as a major potato producer.

* In 1855 Eugene von Guerard painted Tower Hill. The painting was subsequently used when the hill was reafforested.

* The town site of Koroit was surveyed and the first town allotments were sold in 1857. That same year the Tower Hill Lake National School was established.

* The Presbyterian Church was consecrated in 1859.

* The Koriot Botanic Gardens were established in 1862.

* The local police station was established in 1867.

* Novelist Henry Handel Richardson (born in 1870 as Ethel Richardson) moved to Koroit with her family in 1878.

* Dairying prospered and a butter factory was established in 1888.

* The Koriot Railway Station was built in 1889.

* In 1961 Tower Hill was declared a State Game Reserve.

* In 1962 the Robin Boyd-designed Worn Gundidj Visitor Centre was opened at Tower Hill.

* In 2012 the Port Fairy to Warrnambool Rail Track, running through the town, was officially opened. 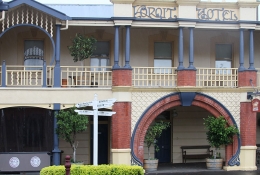 The Koroit Hotel with its distinctive facade and signposts to Ireland. 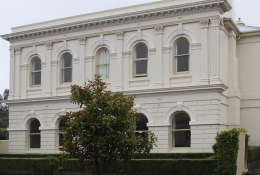 The former National Australia Bank. Opened as a single storey building in 1868 with a second storey added in 1872. 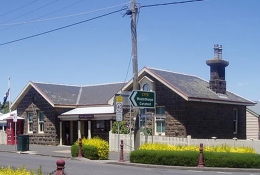 The Post Office (1872) where Henry Handel Richardson's mother was postmistress. 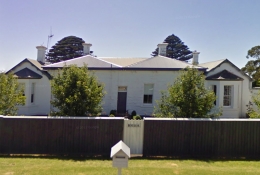 Rosebank (1850s) built for the owner of the Koroit Hotel. 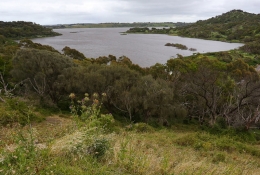 View across the crater lake at Tower Hill. 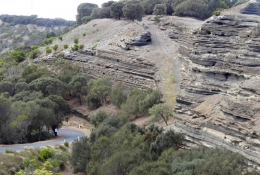 Layers of solidified volcanic ash on the sides of Tower Hill.