Historically Korumburra was an important black coal town which grew up to meet the Victorian demands for power in the late 19th century. Today it still has the Coal Creek Community Park and Museum, its only really significant tourist attraction, which is a reminder of its mining past. Since the decline of mining the town has focused on dairy and cattle with tourism (it is on the road to Wilsons Promontory) playing an important part in the local economy.

Korumburra is located 120 km south-east of Melbourne via the M1 and South Gippsland Highway. It is 227 metres above sea level.

There is some minor confusion over the meaning of "korumburra". It is a local Aboriginal word meaning either "Blowfly" or "maggot" - the larvae of a blowfly. The town was originally known as Coal Creek ... for obvious reasons.

Coal Creek Community Park and Museum
The Coal Creek Community Park and Museum, located just off the South Gippsland Highway at 12 Silkstone Road, consists of a collection of sixty three buildings which have been collected from the surrounding district since 1974. The buildings are either directly relocated (and restored) or faithfully copied from the mining towns of the area c.1890-1920. It is located upon the original site of the Coal Creek Mine (the poppet head and coal mine are the originals), the first profitable black coal mine in Victoria, and situated upon 15 hectares of land, which have been replanted with native flora in an attempt to recreate the rainforest environment of the original township. Some of its features include the ANZAC Room which looks at the impact of World War I on the local community, the poppet head, the mine manager's residence, the Premier Carriage Factory, a cordial factory, a railway station, a printer's shop with olden-style typesetting, a school and church, the mine tunnel for a glimpse of life underground, original settler's cottages, including Edward Hobsen's wattle-and-daub hut (c.1842), milking displays, a mine explosion and horse-drawn vehicle rides. There is a steam train which runs about five times a year and there is a blacksmith on site about once a month - see the website for dates and information. It is open from 10.00 am to 4.30 pm Thursday to Monday (closed Tuesday and Wednesday) Contact (03) 5655 1811 or mobile 0477 004 315. For more detailed information check out http://www.coalcreekvillage.com.au.

The Murals of Korumburra
There are a total of seven impressive murals around Korumburra. They were all painted by local artist, Dennis Leversha, who taught art at both Sale and Wonthaggi technical schools after graduating from RMIT and working as a stage scenery painter at the Princess Theatre in Melbourne.
It is possible to see them all starting with the office wall which is located just up the South Gippsland Highway from the Coal Creek Museum and continuing on into town where the rest are located in the main street - Commercial Street.
The murals depict:
* The Office Wall - the landscape of the former coal mining town
* The wall on the Italian Social Club - Italian pea growers on the hills around the town
* The wall of the service station in Commercial Street - the fire at the Middle Hotel in 1933
* The shop wall in Commercial Street - an image of the shopfronts as they were in the 19th century
* The shop wall in Commercial Street - loading milk cans at the Korumburra Butter Factor
* At the Art Gallery - in front is an image of family and friends enjoying the couutryside around Korumburra
* The Art Gallery Frieze - show the colonial architecture of the town.

1. Korumburra Railway Station
Located in Station Street, the Korumburra Railway Station was built in 1907 in the rare Queen Anne style. The Heritage Register listing notes: " The complex comprises of a large, predominantly single storey, brick station building with an upper level residence. The red brick, Queen Anne style building features stuccoed banding, terra cotta tiled hip and gable roof with ridge cresting, dormer windows, cantilevered platform veranda and a pedimented entrance to the lobby. Other structures include the corrugated iron clad goods shed, the brick pedestrian subway, and the up side building. While various internal modifications have been made, and several outbuildings have been removed, the station buildings remain largely intact." For more detailed information check out http://vhd.heritagecouncil.vic.gov.au/places/634/download-report.

3. Korumburra Hotel
Located in Commercial Street, the Korumburra Hotel (now known as the Middle Hotel) was built in 1889 by Antonio Radovick who, because he was influential on the construction of the town, is known as the "Father of Korumburra". The hotel was used as their surgery and shop by both the local doctor and the local chemist and in 1890 it was used for a Catholic mass.

11. Braeside
Located at 52 Radovick Street, Braeside was built around 1900 for Peter Hudson, the owner and manager of the Austral Coal Mine. It is an Edwardian design with a bullnose veranda with decorative posts and an unusual central skylight.. The Norfolk pines in the garden were planted around 1900 as well.

15. Post Office
This very distinctive building on the corner of Mine Road and Bridge Street, was built by Neil Falconer in 1904. The style is Edwardian with extensions carried out in 1948. It was also the local telephone exchange until it closed down in 1974.

20. Austral Hotel
Located on the corner of Mine Road and Bridge Street this hotel was built 1894. The upstairs was used for the local lodge meetings.

26. Lynton House
Located on the corner of Commercial Road and Radovick Street, this elegant building was originally occupied by C.E. Brown, the local chemist (hence the sign "The Korumburra Chemist") but was rebuilt in 1929.

Cooks Hill Lookout and Strzelecki Cairn
Cooks Hill, located 10 km north of the town via the Korumburra-Warragul Road, provides a panoramic view of the area, including Bass Strait and the Strzelecki Ranges.
Along the road to Cooks Hill is a large cairn, just before you reach the entrance to the Korumburra Golf Club, which commemorates Paul Strzelecki's exploration of the area c.1840.

* There is some evidence that Europeans knew of existence of coal in the area as early as 1843.

* Some people claim that mining rights held from as early as 1863.

* Another account claims that coal was discovered in 1872 when a horse scratched the ground and dug up black coal.

* By 1874 Whitelaw's track had been cut from Foster to Coal Creek.

* Certainly coal was discovered at Coal Creek in 1878. Around that time farm selections were sold in the area.

* A large diamond drill arrived at the local coal mine after a five-week journey in 1889.

* The railway reached the town in 1891. A new shire was declared that year.

* In 1892 the first coal from Coal Creek was sent by railway.

* The town's first agricultural show was held in 1893.

* Severe bushfires occurred in the district in 1898.

* The Korumburra Railway Station was opened in 1907.

* The shire was named after Korumburra in 1922.

* A bush nursing hospital was established in the 1930s.

* In the 1970s the dairy factory became a world pioneer in the production of edible casein, the major group of milk proteins.

* The Korumburra Dairy Factory was closed down in 1975.

There is a useful site. Check out https://www.travelvictoria.com.au/korumburra. 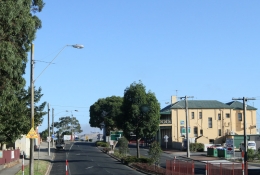 Mine Street into town with the Austral Hotel on the right. 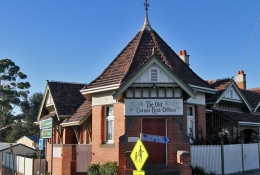 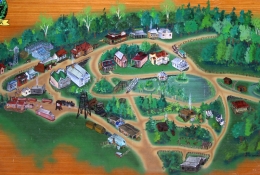 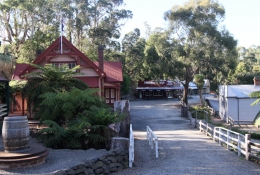 Some of the buildings down the street at the Coal Creek Museum. 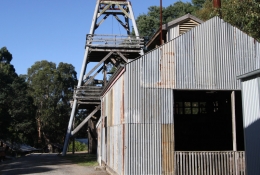 The poppet head at the Coal Creek Museum 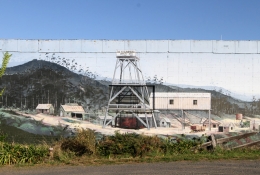 Located on the office wall at the southern end of town this mural depicts the early coal mining history of the district. 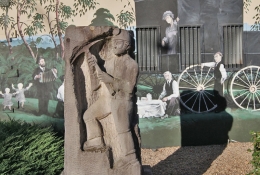 Sculpture of a coal miner outside a mural on the walls of the Federation Art Gallery. 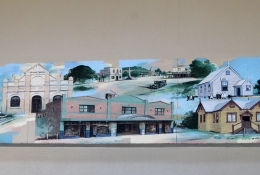 A section of the colonial architecture frieze outside the Federation Art Gallery. 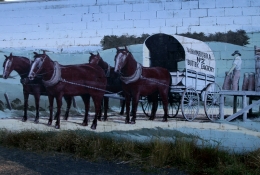 Mural on a shop wall on Commercial Street depicting work at the Korumburra Butter Factory.