Kulin (pronounced 'Cool-in') is a small wheatbelt town servicing the surrounding sheep and grain farming land where wheat, barley, canola, lupins and field peas are grown. In the town the main attractions are the Giant Water Slide (proudly claimed as the largest in Australia) and the local museum which is located in an old garage dating from the 1930s. But the main attractions in the district are the natural features and the fauna and flora. It is an area noted for its wildflower displays which occur between August and October and include a particularly beautiful flowering gum - the Eucalyptus macrocarpa. The Kulin Bush Races are a major attraction drawing over 5,000 people to the town and including an art and craft show, camel races, foot races, Clydesdale horse rides and horse racing.

The Aborigines who showed Surveyor John Septimus Roe the Kulin Soak referred it it as "coolin". The settlement was originally known as Jilakin but this was changed to Kulin when the railway reached the town. No one is sure what the original "coolin" meant although it was probably the name for the Kulin Soak. There is also an interpretation which says Kulin comes from a Nyoongar word "koori-iny" meaning "coming and going".

Kulin Aquatic Centre and Giant Water Slide
It is unusual to such a large water slide in such a small town but the Kulin Water Slide is the biggest waterslide in Australia and probably the biggest in the Southern Hemisphere - it is 18 metres high and 182 metres long. It is open during the hot summer months and well worth visiting. For more information tel: (08) 9880 1222. Check out http://kulin.wa.gov.au/main/recreation/aquatic-centre/ for opening times and entry fees.

Tin Horse Highway
There is a 20 km stretch of the Kulin-Lake Grace Road which has become known as the Tin Horse ‘Highway’ because, in recent times, budding sculptors have taken 44 gallon drums and shaped them, with a sense of amusement, into interesting and unusual tin horses. By 2017 there were over 70 tin horses displayed on the Tin Horse Highway. They became such a popular local attraction that people started displaying sculptures on the Kulin-Corrigin Road and calling them the West Kulin Tin Horses - they included the biggest horse yet built. Then, as if there was no end to this harmless competition, people started building sculptures in the centre of the town. Near the town's famous Water Slide there is now the ‘Thorpedo’, inspired by Australian Olympic swimming legend Ian Thorpe. It doesn't really have much to do with horses ... but it does have a lot to do with the town's tourism. There is a downloadable brochure titled Drive the Tin Horse Highway which can be accessed at http://kulin.wa.gov.au/file/THHDRIVINGTHETHHDLFLYERHRFINALlittleevil.pdf.

Jilakin Lake and Rock
The Jilakin Rock, which lies 16 km to the east of the town on the Kulin Holt Rock Road, is a huge granite monolith which overlooks the 1214 ha Jilakin Lake. The area is noted for the jarrah trees - the only ones this far from the coast - and the excellent picnic facilities and views across the lake. The local Noongar Aboriginal people believed that the jarrah trees had grown as the result of two groups of Aborigines driving their spears into the ground as a sign of friendship. It is interesting that there are no jarrah trees on the wheatbelt and the nearest stands of jarrah are 140 km away.

Buckley's Breakaways
The dramatic and unusual Buckley's Breakaways are located 70 km east of Kulin en route to Wave Rock. They are distinctive because they are characterised by unusual cliff formations in pink and white rock topped by orange laterite. The Kulin website explains: "The gully is dominated by Cypress Pine, Blue Mallet and Box Poison, but it is the top of the “breakaway” which carries the most interesting plants. It’s the natural garden with something in flower all year round. In the shelter of the shrubs, look for delicate orchids, trigger plants and sundews. At the site you will find interesting interpretive information about the area, a fabulous picnic spot and endless photo opportunities!" For more information check out http://kulin.wa.gov.au/main/tourism/buckleys-breakaway-/.

* Prior to the arrival of Europeans the district was home to the Noongar Aboriginal people for at least 40,000 years.

* The first European through the area was the Surveyor and Explorer, John Septimus Roe, on his 1848-1849 expedition.

* By the 1870s sandalwood cutters were in the area cutting the scented tree for the Asian market.

* By the early 1900s pastoralists had moved into the area. The reliability of water at the Kulin rock soak saw sheep being successfully grazed.

* In 1905 Michael Brown took up a large land holding which included land upon which modern Kulin now stands.

* In 1909 Michael Healy and Edward John Reardon took up land at Kulin Rock.

* In 1915 the railway from Narrogin reached Kulin.

* In 1932 the local wheat silos were installed with two grain elevators at the railway siding.

There is a useful, downloadable brochure with a comprehensive overview of Kulin. Check out http://kulin.wa.gov.au/file/A3VisitorGuide_web_updatedAugust2015pdf.pdf. There is also a promotional video which can be accessed at http://www.australiasgoldenoutback.com/travel-destinations-outback-australia/Wheatbelt_and_Wave_Rock/Pathways_to_Wave_Rock/Kulin. 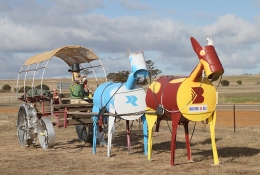 One of the many amusing "sculptures" on the Tin Horse Highway. 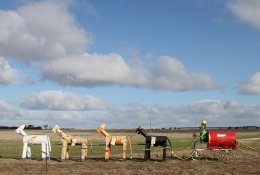 An impressive collection of horses on the Tin Horse Highway 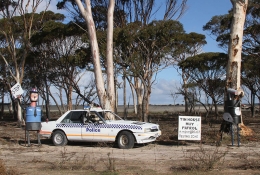 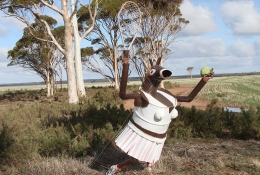 Fillypoosis on the Tin Horse Highway 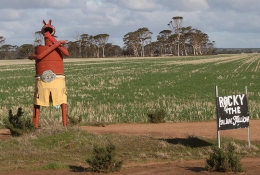 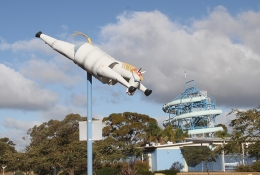 “Thorpedo” - the diving horse - outside the impressive Kulin Aquatic Centre 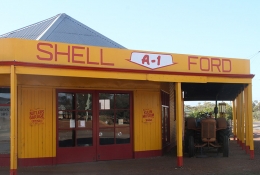 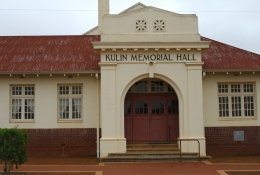 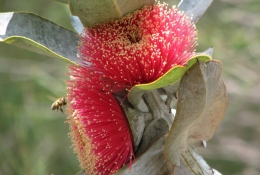 The flower of the Eucalyptus macrocarpa which blooms in the spring.