Charming, quiet town in the foothills of the Blue Mountains.

Kurrajong is at the limits of the Hawkesbury district. It lies on the foothills of the Blue Mountains above the Hawkesbury Plain and is notable for its superb views over the Sydney Basin. The road from Sydney passes through Richmond and crosses the Hawkesbury River at the outer Sydney suburb of North Richmond. Beyond the bridge the road climbs up through Kurmond to Kurrajong Heights. The land has been cleared by people who have moved into the area and grown European cold climate trees and commercial fruit crops - apples, pears, peaches, apricots, nectarines, walnuts and cherries. Kurrajong is nestled just beyond Bells Line of Road and is a deserved, well kept secret.

Kurrajong is located 73 km north west of Sydney in the foothills of the Blue Mountains.

One of the earliest European visitors to the area was Governor Lachlan Macquarie, who subsequently wrote in his Journal of a Tour of Governor Macquarie's First Inspection of the Interior of the Colony about his visit to this area: "We rode through a fine open forest and hilly country for about 5 miles to the foot of the Curry Jung Hill, which is very long and steep to ascend, arriving on the summit of it at 12 o'clock, and from whence we had a very grand noble prospect of the low grounds on both banks of the River Hawkesbury and as far as the Green Hills." The word, or words, probably come from a local Aboriginal word meaning "beautiful tree". Hence the kurrajong tree (Brachychiton populnous).

Kurrajong Village
The appeal of Kurrajong lies in simply wandering around the small, neat village. It is well hidden from the roar of traffic on Bells Line of Road and now has rows of antique shops, craft shops, cafes, restaurants and tea rooms. There are a small number of places of historic interest including St Gregory's Roman Catholic Church (1904) which has an historic graveyard with spectacular views over the Cumberland Plain and the renovated Goldfinders Rest (1851) at 164 Old Bells Line of Road, an old inn which was opened to provide accommodation and refreshment for the miners travelling on Bells Line of Road to the Turon goldfields.

Views across the Sydney Basin
It is widely accepted that the descent to the Cumberland Plain from Kurrajong Heights offers the best views of the Sydney basin. From various points on the road, on a clear day, you can see across the Sydney basin with the jagged outline of the central business district on the horizon. If you have ever wondered why Greater Sydney is referred to as "the Sydney basin" then this vantagepoint explains the accuracy of that description.

Kurrajong Heights and Knights Hill
Kurrajong Heights village has art galleries, antique shops and gift shops as well as St James Church of England (a fine building dating from 1889), St David's Presbyterian Church (1886) and the Post Office which is a rarity having been prefabricated in England and shipped out to Australia. The Post Office stands next to Lochiel House.

Lochiel House
Located at 1259 Bells Line of Road, Kurrajong Heights, Lochiel House, one of the oldest buildings in the district, is now a restaurant. It was built by Joseph Douglass, a former convict, who was granted the land at Kurrajong in 1825. He built this interesting building - with its hand-hewn hardwood, original fireplaces and sandstone floor - a few years later. In the early days Douglass used it as both a residence and an inn. By the 1850s it was a popular accommodation destination known as 'Ivy Lodge' and offering meals and "stabling and fodder for a horse". It was subsequently purchased by James and Andrew Cameron who changed its name to Lochiel House. They used the house as their mountain retreat. It subsequently became a post office before becoming an art gallery in the 1980s. In 1994 it became a cafe and recently it has been converted into a chic restaurant. For more information check out http://www.lochielhouse.com.au.

Kurrajong Radio Museum
Located at 842 Bells Line of Road, Kurrajong Heights, the Kurrajong Radio Museum "offers visitors a nostalgic trip through the golden years of radio." The museum contains a comprehensive collection including domestic, armed service, professional and commercial radio and studio equipment. It includes such quirky equipment as a ship's radio station, an old teleprinter, a radio station control room and a wide range of old radios. Check out http://vk2bv.org/archive/museum for more information. It is open most Saturdays and Sundays from 10.00 am - 5.00 pm, tel: (02) 4573 0601.

Blue Mountains Botanic Garden, Mount Tomah
The Blue Mountains Botanic Garden, Mount Tomah (now a 252 ha Blue Mountains annex of Sydney's famous Botanic Gardens) is located on a geological platform of 15-million-year-old basaltic lava. These volcanic soils, which also exist at Mount Wilson, are ideal for orchards and gardens. It wasn't until 1934 that a French horticulturist Alfred Brunet purchased the land and developed a cut flower farm. He offered the land to the Sydney Botanic Gardens in the 1970s. In 1987, as part of the Bicentennial year celebrations, the gardens were expanded dramatically. Today the result is a beautiful 28 ha site which features an excellent collection of cool climate plants from around the world, with a staggering 40,000 native, exotic and rare plants.
There are a total of thirteen separate gardens ranging from Southern Hemisphere Woodland and a Bog Garden through Brunet's Meadow (once Brunet's private garden), a Proteaceae to Rhododendrons and a traditional, European-style Formal Garden which is laid out in three terraces with herbs and rose gardens. There's a 17th century-style Lawn Terrace with manicured lawns and clipped hedges and a Pergola Terrace which is based on 19th-century herbaceous borders. There is an excellent visitors' centre which offers information, displays, a theatrette, a shop, toilets, books, gifts, souvenirs and wheelchair access. It also has a fine balcony with views north across the gardens. There are picnic and barbecue facilities and the gardens are open daily from 9.00 am to 5.30 pm. The gardens have a fine website - http://www.mounttomahbotanicgarden.com.au/ - which provides information on which flowers are in bloom and which times to visit. It also has a downloadable map - http://www.mounttomahbotanicgarden.com.au/imagesDB/paragraph/Feature-Gardens-map.pdf. Entry is free.

The Bilpin Fruit Bowl
Not surprisingly there are now a number of shops and orchard outlets along Bells Line of Road at Bilpin. They all offer fresh apple juice, apple pies, coffee and cafe food. The one which has been in operation since 1985 (it is family owned), and has managed to sneak into the Australian list of "Big Things" is the Bilpin Fruit Bowl at 2093 Bells Line of Road. Check them out at http://www.bilpinfruitbowl.com.au. You can even adopt a fruit tree. Their apple pie is out of this world and their apple juice is excellent.

* The first European into the area was the explorer, Captain Watkin Tench, who in 1788, with his party, seems to have reached Knights Hill. Certainly in his diary he recorded that he explored to "the elevation which bounded our research we gave the name of Knight Hill, in honour of the trusty serjeant who had been the faithful and indefatigable companion of all our travels."

* It is believed that the convict Matthew Everingham, escaping from the Sydney basin, may have walked through the district as early as 1795.

* The explorer George Caley passed through the area in 1804.

* On 1 December, 1810 Governor Lachlan Macquarie explored the area and subsequently wrote in his Journal of a Tour of Governor Macquarie's First Inspection of the Interior of the Colony: "We rode through a fine open forest and hilly country for about 5 miles to the foot of the Curry Jung Hill, which is very long and steep to ascend, arriving on the summit of it at 12 o'clock, and from whence we had a very grand noble prospect of the low grounds on both banks of the River Hawkesbury and as far as the Green Hills." That same year William Lawson, of Blaxland Wentworth and Lawson fame, was given 500 acres at Wheeny Creek.

* The first confirmed European explorer was Archibald Bell, Jr.  who, in 1823, aged only nineteen, crossed the mountains moving from Mount Tomah to the Cox's River. His route has become known as Bell's Line of Road. Although the Blue Mountains had been crossed some years before there was not a route through from Richmond and Bell, on his second attempt, managed to cross the mountains and join up with Cox's Road. When he returned to Sydney, Bell reported the richness of the soil and this attracted settlers eager to grow fruit trees in the area.

* By the late 1820s the bushranger Bold Jack Donahue was using the old track to terrorise the local settlers.

* In 1841 the convict-built road known as Bells Line of Road was opened.

* By the late 1800s the good land around Kurrajong was being used by orchardists.

* The current Bells Line of Road was upgraded and opened in 1901.

* In 1920 the government established the Kurrajong Soldier Settlement. 46 blocks were opened up with the advertising including the wonderful promotion "To those who would soothe their shattered nerves, revive their jaded spirits, regain their vibrant health and vigorous appetite, to all who would seek the tonic of pure air and the exhilaration of beautiful scenery, the call of Kurrajong is simply irresistible."

* In 1926 the railway line was extended from Richmond to Kurrajong.

* By 1928 the Kurrajong Heights Hotel was open for business and popular with holidaymakers.

* In 1975 the Kurrajong Heights Hotel was destroyed by fire.

There is an excellent local website. Check out http://www.kurrajong.org.au. 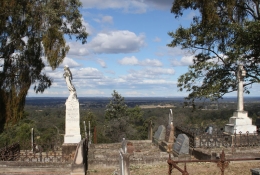 The view across the Sydney basin from the churchyard of St Gregory's Catholic Church. 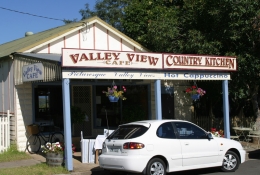 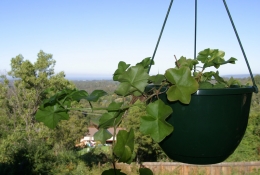 The view across the Sydney Basin from one of the local cafes. 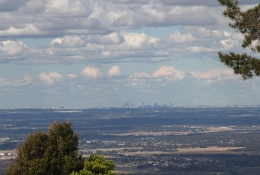 The view towards Sydney's CBD across the Sydney Basin from Kurrajong Heights. 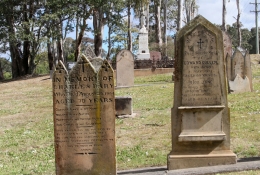 The Graves in the churchyard of St Gregory's Catholic Church.