For over a century Kurri Kurri was a byword for coal mining in the Hunter Valley. It is a town with a late beginning (it didn't come into existence until October, 1902), a spectacular period when it was rich and prosperous because it was surrounded by hugely productive Hunter Valley mines, and a period when the mines closed and it had to readjust to post-coal mining life. Today it is a charming town with a huge hotel which is an ideal departure point for people wishing to explore the Hunter Valley wine region and discover this important chapter in Australian mining and industrial history.

The town was named in 1902 by District Surveyor T. Smith who believed it meant "hurry along" in a language of the local Awabakal Aboriginal people.

Kurri Kurri Murals
In 1998, as the local coal mining industry was drawing to a close, a committee was formed and a project named Towns with Heart was initiated. Part of the plan was to commission murals and decorate both the town and the surrounding old mining towns - Abermain, Heddon, Greta, Kurri Kurri, Neath, Pelaw Main, Stanford Merthyr, Weston - all of which sprung up with the discovery of the Greta Coal Seam. The aim was to depict the history of Kurri Kurri in a series of murals throughout the town, from the Rothbury riots to the famous Headon Greta drive-in. The murals program, which was initiated in 2003, resulted in works being scattered throughout the district including Kurri Kurri, Weston, Abermain, Pelaw Main, Stanford Merthyr, and Heddon Greta. The result is that today there are over 50 murals around Kurri Kurri and they are a magnet for tourists who enjoy wandering the streets and inspecting these huge works of vernacular art. There is a DVD of the murals available at the Visitor Information Centre.

Kurri Kurri Hotel
The Kurri Kurri Hotel, located on the corner of Lang and Hampden Streets, is a hugely impressive building which is a reminder of the wealth that flowed from the mines in the early years of the town. It was built in 1904, is three storeys high, has ornate cast-iron lacework on the verandas with extravagant veranda brackets, has large decorative brick arches, inset pedimented doors and windows and quality joinery. It is the town's most impressive building.

Sir Edgeworth David Memorial Museum
The Sir Edgeworth David Memorial Museum is located in the old timber Pokolbin Schoolhouse (1901) in the grounds of the Kurri Kurri High School in Deakin Street. It contains 6000 items relating to local history and is open Wednesdays, Sundays and public holidays from 1.00 am - 4.30 pm, tel: (02) 4937 4418. Admission is free and there is an extensive local history library and archives.

Richmond Vale Railway Museum
The Richmond Vale Railway Museum, located at 135 Leggetts Drive - 4 km south of Kurri Kurri, is a volunteer non-profit organization, formed in 1979 with the aim of preserving the Railway and Mining Heritage of J & A Brown and the Hunter Valley.
The railway museum is based around the private Richmond Vale Railway which operated from 1905 to 1987, making it Australia's last operative steam railway. It once conveyed miners between the Pelaw Main and Richmond Vale collieries, both owned by industrial magnate John 'Baron' Brown. The track covered 36 km. It extended to the coal-loading facility at Hexham on the Hunter River, passing through three tunnels in the Sugarloaf Range. The locomotives are now heritage protected and take visitors for steam-train rides on the first three Sundays of each month and every Sunday during School Holidays. Gates open at 10.00 am and close at 4.00 pm. The first train leaves at 10.30 am. The return trip on the train takes just under an hour. For bookings tel: (02) 4001 0197 or (02) 4936 2921. Check out http://www.richmondvalerailwaymuseum.org

Richmond Main Colliery
The Richmond Vale Railway Museum is located on the site of the old Richmond Main Colliery which is also heritage listed. Buildings include the handsome and elegant Colliery Administration Office, the powerhouse and some workshops (including the blacksmith's). The employees of Richmond Main set a world record for a vertical shaft mine in 1926 by removing 3400 tons of coal in an eight-hour shift. It was, at one time, the largest shaft mine in the Southern Hemisphere employing 1200 men and boys, 200 pit ponies and state-of-the-art technology.
Richmond Main, the first to appear and the last to go, closed in 1967. The museum "contains a large range of artefacts, maps and photos which documents the history of the Richmond Main Colliery, the development of the South Maitland Coalfields, the equipment used and the social impact of coal mining on the local communities." There are picnic areas, barbecues, outdoor mining exhibits, souvenirs and toilets. For further information tel (02) 4937 5344.

Mt Sugarloaf Lookout
Located 19 km south of Kurri Kurri off George Booth Drive is the access to Mount Sugarloaf which, at 412 m above sea-level, offers magnificent views of Newcastle, Lake Macquarie and the Lower Hunter Valley. The two large steel structures at the top are television transmitters.
The view from the car park is eastwards across West Wallsend with the Hunter estuary at Newcastle in the distance and, beyond that, the ocean. The large inland body of water to the south is Lake Macquarie and at night time the lights of Cardiff at the northern end of the lake are clearly visible.
The bitumen walkway which heads off from the carpark winds its way up and around the summit and leads to The Pinnacle where there are 360° views. To the south-east is the Central Coast and its hinterland. On the western shore of Lake Macquarie are the stacks of Eraring Power Station. Then there are the Watagan Mountains to the south-west and Cessnock to the west, Kurri Kurri to the north-west and Maitland to the north.

* Prior to European settlement the district was home to the Awabakal Aboriginal people.

* The first European landholder in the district was Benjamin Blackburn who was granted 400 acres on the banks of Wallis Creek at Richmond Vale.

*  In 1886, with the Newcastle coal mines coming to the end of their life, the full potential of the Greta coal seam was recognised by the government geological surveyor, T.W. Edgeworth David.

* Plans for a colliery called Silkstone were put forward in 1886 but the plan failed due to insufficient capital and the distance from the railway line.

* The first colliery of the South Maitland Coal Field (East Greta) was opened in 1891. A number of other mines followed.

* The mines at Stanford and Pelaw Main were operating by 1901.

* Kurri Kurri was named in October, 1902 by District Surveyor T. Smith who chose the name because he believed it meant "hurry along" in the language of he Awabakal Aborigines.

* Kurri Kurri was laid out on Crown land in 1902 to serve the miners and their families who were living in makeshift accommodation since taking up employment at the local collieries.

* Land sales commenced in 1903 and within one year Kurri Kurri had a population of 1300.

* The town of Weston sprang up in 1903 around the Australian Agricultural Company's Hebburn No.1 Colliery which had opened in 1902. A private town was laid out on a portion of the Weston family's 640 acre estate.

* Six  men were killed and many others left jobless after an explosion and fire at Stanford Merthyr Mine in 1905.

* Richmond Main set a world record for a vertical shaft mine in 1926 by hauling up 3400 tons in one eight-hour shift. It was, at one time, the largest shaft mine in the Southern Hemisphere employing 1200 men and boys, 200 pit horses and state-of-the-art technology.

* The Great Depression of the 1930s dealt a severe blow to local coal mining.

* Many of the mines became mechanisation after World War II and this led to major job losses in the 1950s.

* By the 1960s wine and growing grapes replaced coal as the most important part of the local economy as demand fell and large open-cut mines began to open in the upper Hunter region.

* A large aluminium smelter was completed in 1972.

* In 1998 a committee was formed and a project named Towns with Heart was initiated.

* The aluminium smelter closed in 2012 leading to over 1,000 locals losing their jobs. 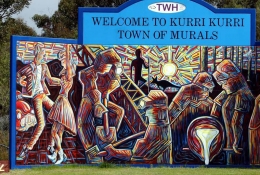 The mural at the entrance to the town. 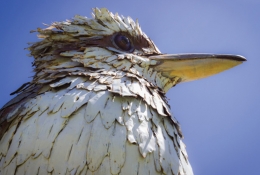 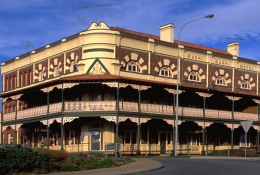 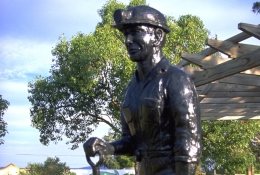 Statue of a miner outside the Kurri Kurri Workers Club 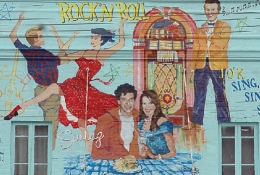 The Rock'n'Roll mural above the local fish shop. 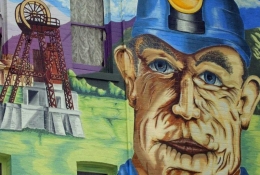 The mural of the miner at Kurri Kurri