Beach area at an important industrial centre south of Perth.

With its sawtooth roofs, corrugated iron buildings and huge loading facilities, Kwinana is an important industrial area south of Perth. The suburban part of Kwinana is hidden from the heavy industry by huge sand dunes. The primary appeal of the area lies in the excellent Wells Park which edges Kwinana Beach, a beautiful white sandy beach which, while surrounded by industry, is ideal for swimming and fishing.

Kwinana is located 43 km south of Perth via the Kwinana Highway.

Kwinana takes its name from the SS Kwinana, a ship which was blown ashore and wrecked in 1922. The ship gave its name to the beach, the seaside resort, the oil refinery and the industrial complex. 'Kwinana' is an Aboriginal word, reputedly from the Kimberley region as it was a sub-division of the Kimberley district, meaning either 'pretty woman' or 'pretty maiden'.

The Grain Terminal
The CBH (Co-operative Bulk Handling Ltd) Group specialises in receiving, handling, storing and outloading bulk grain in Western Australia. It is a grain growers' cooperative which has 200 receival points in the wheatbelt and four port terminals - Albany, Esperance, Geraldton and Kwinana. Kwinana is the biggest of the port terminals with a 650 m long jetty. It is capable of handling over 5 million tonnes of wheat a year and can load over 275,000 tonnes a month. For more information check out https://www.cbh.com.au and http://inherit.stateheritage.wa.gov.au/Public/Inventory/Details/aa27d2c5-2020-46dc-a564-8a80004136e2. Both have useful additional information.

The Beach
There is something delightful and incongruous about a beach which is edged by industry. It is a haven of peace in a world of heavy industry. In the case of Kwinana Beach it has the added advantage of excellent parking and a delightful park - Wells Park, named after the local postmistress, Clara Wells, who was responsible for naming the area. There are excellent picnic and barbecue facilities, tables with good shade cover, plenty of open space and well maintained lawn areas, and it is possible to fish from the jetty and from the cemented promontory which was once the wreck of the Kwinana.

The Wreck of the SS Kwinana
The SS Kwinana, which is now nothing more than some concrete and a few pieces of rusted metal at the southern end of Kwinana Beach, started life as the steamer Darius at a shipyard in Sunderland, England in 1892.

There is a very detailed sign beside the "jetty" which explains in great detail: "The Kwinana was blown ashore on a deserted beach a gutted hulk in 1922, she gave her name to the beach, to the seaside resort that sprang up in later years, and finally to the £40,000,000 oil refinery and the huge industrial centre that is now the pride of Western Australia. Kwinana is a name known among industrialists the world over and among oil men from the Persian Gulf to Texas. Meanwhile the wreck of the old ship lay rusting pleasantly on the foreshore with the gulls and the weekend picknickers for company - until this month when men with oxy-cutter torches and a purposeful air arrived. A landmark was doomed. The old wreck had been declared a danger to children who played among the rusty girders, and it was held to be unsightly in this modern age. So the order went out that the remains of the Darius-Kwinana should be cut up for scrap metal and removed." Fortunately it was decided to leave a section of the vessel and fill it with limestone. It is still there rusting at the southern end of the beach. Read the full account by Hugh Edwards on the sign and think that it has been preserved because it gave the town and the beach their names.

The Spectacles Wetlands
Located east of the coast along Antekell Road, The Spectacles were named because the two lakes connected by a drain look like a pair of spectacles. In summer the lakes can dry up completely but in winter, and after rain, the combination of picnic facilities and walk trails provide an opportunity to enjoy the 360 ha bushland which is known to have one of the largest stands of paperbark woodlands on the urbanised coastal strip south of Perth. It also has fine stands of flooded gum, T-trees, banksia, sheoaks and grass trees. The Spectacles wetlands are a bird watchers paradise, providing a haven for 87 different bird species which can be watched from the bird hide. It is one of the few breeding grounds for the graceful and elusive Rufous Night Heron. It is also possible to see the rare Swamp Harrier as well as bandicoots, snakes, wallabies, possums and bats. Check out http://spectaclestours.com.au/noongar.php for more details.

* Prior to the arrival of Europeans the area was inhabited by members of the Wajuk Aboriginal language group.

* The first Europeans in the area were the first settlers in Western Australia who arrived in 1829 to establish the Swan River Colony, later to be known as Perth. Their ship, Parmelia, ran aground on Garden Island (just off the coast from modern day Kwinana) and they were taken ashore.

* In 1922 the wreck of the SS Kwinana drifted from its mooring on Garden Island across Cockburn Sound and landed where the remnants stand today. The area was named by the local postmistress, Clara Wells.

* The small coastal township of Kwinana was a sleepy holiday resort until 1952 when the Anglo-Iranian Oil Company (now known as BP) entered into an agreement with the Western Australian government to establish an oil refinery in the region. The agreement saw the government build port facilities to handle the shipping of the oil. By 1955 the oil refinery was in operation.

* Around this time a town for the workers was purpose-built.

* In 1954 BHP reached an agreement with the state government and a steel bar plant was established at Kwinana.

* In 1961 Alcoa established an alumina refinery.

* In 1969 work began on the construction of the grain terminal and jetty.

* By 1970 Western Mining had built a nickel refinery. There was also a petro-chemical complex and a cement factory.

There is no visitor information in Kwinana. The nearest is the Rockingham Visitors Centre, 19 Kent Street, Rockingham, tel: (08) 9592 3464.

The City of Kwinana has its own website - http://www.kwinana.wa.gov.au/ - which has useful information for the traveller. 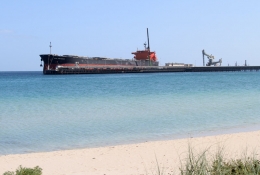 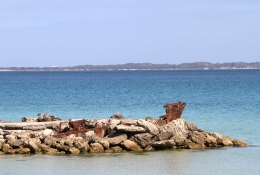 The rusty wreck of the SS Kwinana. 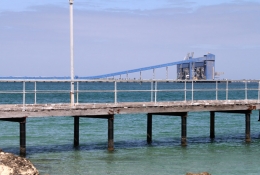 View across to the Grain Terminal from Kwinana Beach. 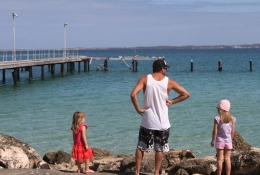 Looking across at the old jetty from Kwinana Beach. 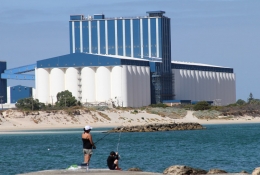 Fishing from the jetty at Kwinana Beach with the huge Grain Terminal in the background. 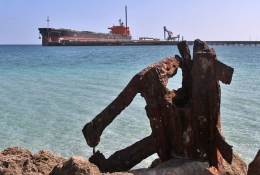 The prow of the old SS Kwinana, now buried in concrete, looks across at the port's modern loading facilities.