Regional service centre in a rich dairy and orchard area

Kyabram is a substantial rural service centre which grew dramatically after World War I when returning soldiers moved into the district and, with the help of excellent irrigation from the Goulburn River, turned the land into a successful producer of fruit and dairy products. Initial success with canned fruit was followed by production of jam and conserves.

Kyabram is located 211 km north of Melbourne via the Hume Freeway. It is 105 metres above sea-level.

It is believed that the town is named after a local Aboriginal word which meant "thick forest".

Kyabram Fauna Park
Located at 75 Lake Road, at the southern end of town, is the Kyabram Fauna Park which was opened in 1976 as a non-profit venture and now has the second largest collection of Australian fauna in Victoria. It proudly declares that it has "Koalas, Alpine Dingoes, Owls, Snakes, Wombats, Kangaroos, Wallabies, Tasmanian Devils, Cockatoos, Parrots, Waterfowl, Cranes, Finches, Lizards and many more. There is a large Walk Thru Aviary; Australia's first, energy efficient Reptile House; Wetland Viewing Hides and a Wetland Observation Tower." It is spread across 55 ha of open woodland.
On the grounds is Hazelman's Cottage (1867), which was originally built 5 km away for Theodore Hazelman, a Frenchman who travelled to the USA as a cabin boy, fought in the American Civil War at the age of 14, and then moved to Australia where he became a boundary rider, married, had 13 children and became a wheat and dairy farmer.
The complex has a 3 ha picnic area, electric barbecues and a childrens' playground. It is open daily from 9.30 am to 5.30 pm, tel: (03) 5852 2883. Check out http://www.kyabramfaunapark.com.au for more details.

Town Mural
Located in an arcade to the west of Kyabram Town Hall in Allan Street is an unusual and impressive mural which, as it explains, "depicts many aspects of Kyabram's history which has helped to create the town's unique character ... Murray Ross was the designer and coordinator of the Mural ... Kyabram school children and parents produced the paintings at the base of the mural and were part of the re-enactment of Colonial Times in Kyabram."

Town Hall
The refurbished Town Hall, located in the Main Street, dates from the 1890’s and presents historical clothing exhibitions in one gallery and the other three galleries have regularly changing contemporary art exhibitions by visiting and local artists. Many Textile and quilt artists  are also featured in the Classic Gallery throughout the year. It is open from 10.00 am - 4.00 pm Monday to Saturday. Check out https://kyabramtownhall.com.au for current exhibitions.

* Prior to European settlement the area was home to the Bangarang Aboriginal people for at least 40,000 years.

* The area was opened up to selection in the 1870s. Wheat farming and dairying became the dominant agricultural industries.

* The first business was a general store which was opened in 1876.

* In 1884 the Post Master General suggested the name of Sheridan for the town.

* Fruit orchards arrived with the first irrigation water in the 1890s.

* The local Mechanics Institute was opened in 1891. That same year the Kyabram Railway School was opened.

* In 1902 local businessmen initiated a statewide movement to dismiss the newly-elected Peacock government for breach of election promise. That year saw a second water storage open on the Goulburn River.

* In the early years of the twentieth century subdivision and utilisation of the Goulburn River's water supply saw the district develop.

* Returning soldiers from World War I focused on fruit-growing.

* A Fruit Preserving Co-Operative was established in 1922. It built one of the largest canneries in the Southern Hemisphere.

* A bush nursing hospital was established in 1933.

* Local stock salesyards were opened in 1937.

* A factory to supply the tin containers for the canned fruit was established in the 1950s.

* The Kyabram Irrigation Research Station was opened in 1959.

* In 1960 the Kyrabram District Memorial Community Hospital was opened.

* By the early 1970s the local Fruit Co-op had gone private.

* In 1989 the factory reopened, converting some of the produce into jams, conserves and toppings.

* In 1994 Kyabram became part of the Campaspe Shire. 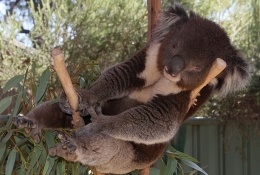 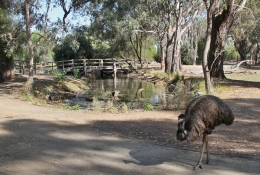 An emu wandering wild and free through the Kyabram Fauna Park 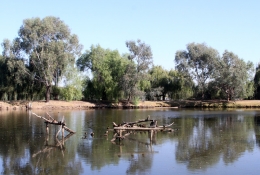 Birds resting in the wetlands area of the Kyabram Fauna Park 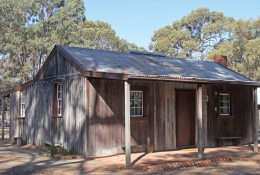 Hazelman's Cottage (1867) in the grounds of the Kyabram Fauna Park 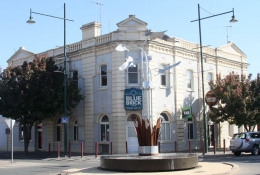 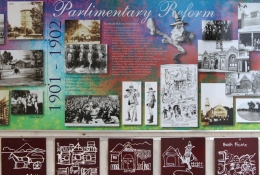