Kyogle is one of those strange country towns which has managed to keep a very low profile because it is primarily a service centre for the rich surrounding lands which were first used by timber cutters to extract red cedar and hoop pine and then, when the land was cleared, given over to cattle and dairy grazing. By a strange quirk of fate a large number of major buildings were constructed in the early 1930s when art deco was fashionable. The result: possibly the finest art deco main street in Australia. The town is located on the Richmond River at the base of the Fairy Mountain. Over the years it has promoted itself as "The Gateway to the Rainforests" and currently as "Where the Sun Spends the Winter". It has an annual rainfall of 1118mm, 250 days of sunshine, and is a suitable starting point for anyone wanting to explore the beauty of the Border Ranges and Toonumbar National Parks.

Kyogle is located on the Richmond River 748 km north of Sydney, 164 km south of Brisbane, 32 km north of Casino and 60 metres above sea level.

It is argued that the local Bundjalung people had a word 'kaiou-gal' which meant 'the place of the bush turkey or bustard'. A cattle station in the district was called Kaiou-gal and this was eventually modified to 'Kyogle' and used to describe the town around 1899.

Art Deco in Kyogle
Like most towns which were economically dependent on timber cutters and sawmills Kyogle, by the 1920s, was full of timber buildings. It made sense. It was a good use of the local product. Even today important buildings like the Masonic Lodge and the Kyogle Post Office are reminders of a time when timber dominated the town. Equally anyone driving around the back streets of the town will be impressed by the elegance of many of the timber houses. Unfortunately in the late 1920s and early 1930s there were a number of fires. Entire rows of buildings were gutted and the architecture of the town changed. Determined not to succumb to fire again, the local builders and architects started constructing important buildings out of bricks. The fashionable architectural style of the time was Art Deco. Today the town stands as a monument to this strange quirk of fate. A town that was made largely of timber has been converted into an Art Deco wonderland.

An Art Deco Walk
The Art Deco Walk brochure lists a total of 14 buildings of interest. It is a model of a well written walking guide not only identifying the buildings but drawing the walker's attention to the salient features of each building thus: "Stop 1. Rex Page Barber - Art Deco Shopfronts 41-47 Summerland Way ... Note the band of lead lighting at the top of the shopfronts. It is typical of the style, with coloured and textured glass and repeated zigzag design. Other typical features include geometric white line motifs on the black tiles and recessed entries." That really does answer this website's key question: "Why are we here?" Other stops include the cafe at 57 Summerland Way, the Exchange Hotel, the Roxy Picture Theatre, the Fairymount Cafe, the Summerland Credit Union which was once the State Bank, the National Bank, the Commonwealth Bank, the Clock tower, the Memorial Institute, the Council Chambers, the Kyogle Museum, the Bank of NSW, Burtons Partnership and Bambu Wholefoods. The walk takes about 90 minutes and guides you up and down both sides of the Summerland Way. It is advisable to walk on both sides of the street so can see the Art Deco facades above the awnings on the other side of the street. A brochure is available from the Visitor Information Centre or it can be downloaded at http://www.visitkyogle.com.au/images/uploads/Kyogle_Art_Deco_Walk.pdf

Kyogle and District Historical Society Museum
Located at 19 Bloore Street, and open Thursdays from 10.00 am - 2.00 pm and Saturdays from 9.00 am - 1.00 pm, the Kyogle and District Historical Society Museum "holds a detailed history of Kyogle and District dating back pre-1900’s.  An extensive pictorial collection, maps, stories and items of memorabilia display the path of the early selectors and settlers.  Whether they were on the land, timber getters, railway workers or town’s business people, their story is told in the museum." There are regular exhibitions which are changed every six to nine months. The museum is managed by volunteer members from the Kyogle Historical Society.  Members and non-members may research during opening hours.  For more information check out https://www.facebook.com/kyoglemuseum.

Kyogle Botanic Gardens
The Kyogle Botanic Gardens and Rainforest Reserve is located on the banks of Fawcetts Creek, north of the town centre. It is an ideal place for a quiet walk or a picnic. There is a wheelchair-access walk and a number of pleasant natural paths and cycleways.

The Kyogle Town Lookout
Turn into Rous Street off Summerland Way and follow the signs to the top of the amusingly named Fairy Mountain. Not only does this lookout offer an excellent overview of the town but it also offers 360° views of the verdant surrounding countryside.

Toonumber National Park
Located 35 km west of Kyogle on the Summerland Way between Kyogle and Woodenbong, the Toonumber National Park covers 5750 hectares and contains two World Heritage-listed rainforests - the Murray Scrub and Dome Mountain Forest - both of which are accessible by 2WD vehicles on unsealed roads. The park is known for its rich volcanic soils and high subtropical rainfall. Consequently it contains over 400 species of flowering plant and is home to stands of booyong trees, strangler figs, Moreton Bay figs, hoop pines, giant stinging trees, flame trees and rosewood. The park is also a habitat for rare animals including the paradise riflebird, red-necked pademelon, tiger quoll, Coxen's fig parrot and Albert's lyrebird. The Murray Scrub Walking Track, which is at the end of the Murray Scrub Road, is a walk which lasts around thirty minutes (it has a loop at the end), and passes hundreds of strangler figs. A map can be downloaded at http://www.environment.nsw.gov.au/nationalparks/parkHome.aspx?id=N0092.

Border Loop
The challenge was to get the railway line through the McPherson Range. The solution was to build a railway line similar to the famous ZigZag railway at Lithgow. In 1926 the project was started. The aim was to build a single gauge railway line from Sydney to Brisbane (an historic first at a time when each state had a different gauge) and to build a line which traversed the McPherson Range. It was variously known as the Spiral Loop and the Border Loop and, at one time during the Depression, provided employment for 1500 men. Today the loop (it has an unusual circular viaduct which helps the trains to rise as they pass through the mountains) can be viewed from the remarkable Lions Road, a community project which was completed in 1970. There is a good map available on http://www.bigvolcano.com.au/stories/lionsroad/index.html.

Richmond Range National Park
The Richmond Range National Park, which lies to the west of Kyogle, is one of a number of excellent national parks in the area. It is popular for bushwalking and bird watching with three walking tracks from the Cambridge Plateau Picnic Area - a very easy 400 m, ten minute walking loop, a 2 km rainforest track and a 6 km hike to the Culmaran Creek Falls - all of which start from the main car park. The Richmond Range National Park includes over 400 species of flowering plants as well as brush box, Sydney blue gum, flooded gum, giant stinging trees, hoop pines, strangler figs, Moreton Bay figs and white booyongs and the park abounds in Parma wallabies, long-nosed potoroos, spotted-tail quoll, yellow-bellied and squirrel gliders, brush-tailed phascogale, brush turkeys, rose-coloured fruit-doves and Albert's lyrebird.

The eastern plateau of the park is traversed by the four hour, 90 km Tweed Range Scenic Drive (also known as the Rainforest Way - a brochure can be downloaded at http://www.rainforestway.com.au/index888a.pdf) which is a well-maintained gravel road with "spectacular views, waterfalls, sparkling creeks and rugged ridges". It forms a rough semi-circle: from Kyogle head north to Wiangaree and turn right into Lynchs Creek Road which becomes Simes Road. Turn right onto Tweed Range Scenic Drive which traverses the Border Ranges National Park (44km all weather gravel road). Follow the road through the park, take a stroll through the rainforest and enjoy a picnic.

* For tens of thousands of years prior to European settlement the area around Kyogle was home to the Bundjalung First Nation peoples.

* In the 1830s a huge property, known simply as the Richmond Head, was established by prominent colonial landowner and politician, Sir John Jamieson. When Jamieson died in 1844 Richmond Head was purchased by two of his fellow Irishmen, Charles Fawcett and Henry Mayne, who renamed the property Fairy Mount. At the time it covered 12, 431 ha (30,720 acres).

* The Kyogle area became known as a land of rich potential and in the 1840s Oliver Fry, the NSW Commissioner for Crown Lands, eulogised that: "No country ever came from the hand of its creator more eminently qualified to be the abode of a thriving and numerous population than" the area around Kyogle. A number of farmers heeded this advice and the area was settled throughout the 1840s and 1850s.

* In the 1860s cedar cutters arrived and for the next thirty years cedar cutting and saw milling were the district's most important industries. When the cedar was exhausted an industry grew up around the rich stands of hoop pine.

* Kyogle was slow to develop as a town. There is no evidence of the name 'Kyogle' being used to describe the settlement before 1899.

* The town's most significant change occurred in 1903-1904 when it was surveyed, subdivided and sold and dairy farmers moved in to take advantage of the rich soils and reliable rainfall. A butter factory was opened in 1905 and by 1950 the district had 523 dairies.

* The town was connected by rail to Casino in 1910 but the continuation of the line to Brisbane was hampered by the complexity of crossing the McPherson Range. Eventually Border Loop, with its circular viaduct, was completed. Kyogle was not connected to Brisbane until 1930.

* In 1935 the Summerland Way, connecting Coffs Harbour to Brisbane, was constructed between Mount Lindesay and Casino and World War II saw the road improved as an inland, flood-free route which avoided the problems associated with the Clarence River and its two ferry crossings.

There are two local websites - http://kyogle.nsw.au/  and http://www.visitkyogle.com.au/ - both of which have comprehensive local business directory. 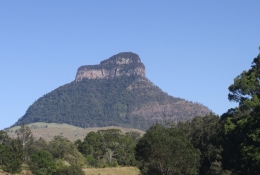 Mount Lindesay from the Woodenbong-Kyogle road. 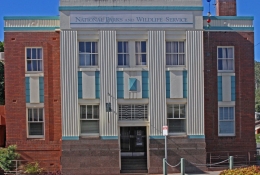 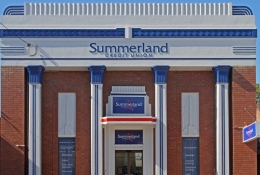 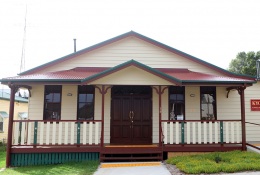 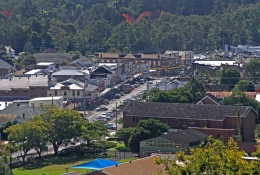 The view across Kyogle from the top of Fairy Mountain.