Lady Elliot Island is a small (42 hectares - it can be walked around in about 45 minutes) shingle coral cay at the southern end of the Great Barrier Reef. It has two claims to fame: it is the southern most inhabited island on the reef and the only coral cay to have a proper airport. The island, which is part of the Capricorn Bunker Group, is known as a sanctuary for over 1,200 species of marine life. Visitors can expect to see manta rays (the resort calls itself the "home of the manta ray"), turtles and impossibly rich bird and marine life.

In 1816 Captain Thomas Stewart became the first European to sight the island. He was, sailing the 353 tonne 'Lady Elliot' which had been built in Bengal and named after the wife of Hugh Elliot, the colonial governor of India. Stewart named the island after Lady Elliot.

Description of the island
Small shingle coral cay with coral beaches and extensive reefs around every side of the island.

How do visitors access it?
Visitors planning to stay for an extended time tend to use Bundaberg while day trippers come from Hervey Bay (40 minute flight), Brisbane (80 minutes) and the Gold Coast (100 minutes). There is no boat access. The flights to the island are chartered from Seair Pacific who use either a Cessna Caravan (13 passengers), Britten Norman Islanders (9 passengers) or a Twin Otter (19 passengers). There are daily flights from Hervey Bay, Bundaberg, Brisbane and Coolangatta.

Reef Walking
The resort provides suitable footwear and the reef at low tide is easily accessible from any of the island's beaches. The near shore waters are rich with clams, sea cucumbers, starfish and numerous varieties of coral. It is possible to take a guided tour or to explore the reef on your own.

Diving and snorkelling
Snorkelling on the reef around the island is only possible in mid to high tide. The lee side of the island offers the best snorkelling with a high likelihood of seeing manta rays (they are harmless), turtles, giant clams, sea cucumbers, starfish, parrot fish and , of course, brightly coloured coral. There are also glass bottom boat tours and guided snorkel experiences. Beware: with a high tidal range the reef is susceptible to strong currents. There is lots of useful information on the resort's website at https://www.ladyelliot.com.au/content/snorkelling.

Birdwatching
The island is home to crested terns, sooty oystercatchers, black-napped terns, brown boobies, black noddies, buff-banded rails, reef egrets, oyster-catchers, plovers, godwits and the ubiquitous gulls. Although there are birds on the island all year round the period between October and April is the most impressive. There are regular guided tours.

Other Animals
Whales are common in winter and early spring and turtles use the island to nest from late October to Mid-February. It is also possible to see manta rays, reef sharks (they are harmless) and dolphins.

Lady Elliot Island Lighthouse
The lighthouse currently standing on the island was erected in 1873 and is recognised as the third lighthouse built in Queensland after it separated from New South Wales. It is also the first lighthouse built in England and prefabricated with a timber framed substructure and a cast iron external cladding. The light was originally a flashing white light of 4,000 candle power. This was increased in 1923 to 23,000 candle power and again in 1928 to 85,000 candle power. There are two graves near the lighthouse - one is the 30-year-old daughter of the first Lady Elliot light keeper. She had been born on the island and lived most of her life there. She contracted pneumonia and died in 1896. At the time stores ships only called at the island once every four months. The other grave is of the wife of a ship's captain who died at sea. She had made her husband promise to bury her on land ... and Lady Elliot Island was the first land they reached. For more information check out http://www.lighthouses.org.au/lights/QLD/Lady%20Elliot%20Island/lady%20elliot%20is.htm.

The Lady Elliot Island Eco Resort
History
Lady Elliot Island Resort was established 1984 when a series of prefabricated buildings were brought to the island. They still provide comfortable, basic accommodation and have been enhanced by eco friendly suites and tents all of which are designed to minimise the impact on the island. The rooms are fan cooled, not air conditioned.

Who does it appeal to?
People who enjoy snorkelling, diving, birdwatching and experiencing a careful eco experience on a fragile coral cay.

Free activities
The island has a range of 'reef' experience with both resort residents and day trippers being offered snorkelling, scuba diving, reef walking and swimming. As well, obviously, there is bird watching, whale watching (in season) and walking around the island.

Other activities
Organised snorkelling and scuba dives, glass bottom boat. The glass bottom boat tours have a cost but there is a free tour which is included in the overnight rate and the day tour price.

Eating at the resort
A full buffet dinner and breakfast are included in the overnight cost.

* Over the millenia birds deposited guano on the coral cay and vegetation began to appear.

* Although Captain James Cook sailed past the cay in 1770 he did not sight it.

* In 1802 Matthew Flinders traversed the 2000 km length of the Great Barrier Reef without sighting the island.

* In 1816 Captain Thomas Stewart, sailing the 353 tonne 'Lady Elliot' (it had been built in Bengal and named after the wife of Hugh Elliot, the colonial governor of India), sighted and named the island.

* In 1843 the H.M.S. Fly, captained by F.P.  Blackwood, anchored off the island. The crew killed some thirty turtles and the ship's naturalist noted "The island was well stocked with birds, of which black noddies and shearwaters were the most abundant; the next in number being terns, gulls, white herons and egrets, oyster catchers and curlews."

* In 1863, a Mr. J. Askunas applied for, and was granted, a 5 year mining lease over the entire island to strip the island of its guano. The lease was extended to 10 years and by 1873 the island had been stripped of all its guano and most of its vegetation. Askunas employed 30 Chinese and Malay workers.

* In 1866 a temporary lighthouse was built on the island.

* In 1872 a storm destroyed the temporary lighthouse.

* The Queensland government put goats on the island to provide food for stranded sailors.

* The original lighthouse keeper's cottage was demolished in 1925.

* By the late 1960s the island was completely barren.

* In 1969 Don Adams, a mixture of businessman and conservationist, built an airstrip on the island. At the same time he killed all the island's feral goats and began an active revegetation program.

* The lighthouse continued to operate until it was automated in 1980. It still stands on the beach to the west of the airstrip.

* In 1985 a lease for a low-key resort resulted in the establishment of the islands resort.

Everything you need to know about the island can be found at https://www.ladyelliot.com.au.

Check out https://www.ladyelliot.com.au/content/room-types-rates for room types and rates. Tel 1800 072 200 to make an inquiry.

Beachfront Dining Room - there are no telephones on the island.

The official island website is a rich source of information. Check out https://www.ladyelliot.com.au. 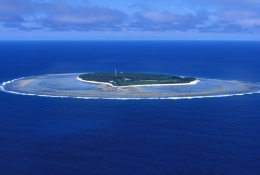 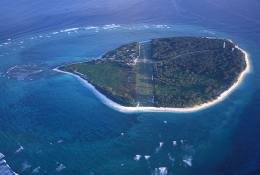 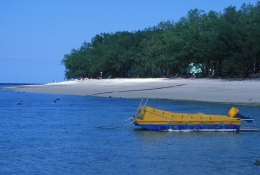 View from the atoll across the beach at Lady Elliot Island 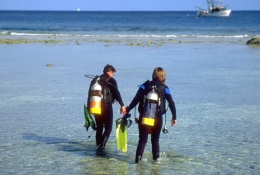 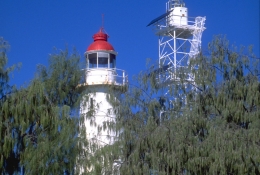 The lighthouse dates from 1873