Historic agricultural town on the Lockyer Plain west of Brisbane.

Laidley is a quiet township which has promoted itself the 'Country Garden of Queensland' because the rich, dark soils which surround the town and support mixed farming, vegetable growing for the Brisbane markets, dairying and cotton. The town is known for the unusual Das Neumann Haus (now a tea room and visitor centre); for a statue of a Clydesdale located between Das Neumann and the local council; and for the extensive Laidley Pioneer Village Museum.

Laidley is located 84 km west of Brisbane and 108 m above sea level.

The explorer, Allan Cunningham, travelled through the district in 1829 (he was the first European into the area) and named Laidley's Plain in honour of New South Wales deputy-commissary-general, James Laidley.

Das Neumann Haus
The obvious starting point for any exploration of Laidley is the Das Neumann Haus, just off the corner of William and Patrick Streets, which is a unique colonial weatherboard building designed and constructed by local carpenter and furniture maker, Hermann Neumann.
The house was originally a family home but Neumann, who made and sold family furniture, turned it into a showroom. He was more than a carpenter building his own violins, making furniture for the local Saint Saviours Anglican Church, and building impressive grandfather clocks. When the Neumanns lived in the house it was known as a cultural hub in the district because Annie Neumann taught piano and violin and a son, Alfred, had a club - the Keep on Aiming Higher Club - where young men gathered to play instruments and talk about literature. It was gifted to the local council in 1980 and today it is a cafe, with excellent apple strudel, and a museum recalling the life of the Neumann family.

Laidley Pioneer Village Museum
Located on the corner of Drayton Street and Pioneer Street, the Laidley Pioneer Village Museum has an extensive collection of old buildings from the local area. They include a fully furnished slab hut as well as a an old gaol, general store, butchers shop, post office, working blacksmiths shop. The pioneer village is located on the old road to Toowoomba. It was established in 1972 and, as such, is the first historic village in a state where that form of museum is popular. It is interesting that after 1865 Laidley was the first stopping place for passengers from Grandchester who were heading further west to Toowoomba and beyond. Prior to that it was the overnight camp for the teamsters who had spent the day travelling from Grandchester.
The Pioneer Village Museum is open seven days from  9.00 am to 3.00 pm. It is located to the south of the town on an old paddock which used to be a resting paddock for the Cobb & Co horses. Tel: (07) 5465 2516 for details.

* Prior to European settlement the Lockyer Valley around Laidley was home to the Jagara, Kitabul and Birren Aboriginal people.

* The explorer Allan Cunningham travelling through the area in 1829 and named the area after the New South Wales deputy-commissary-general, James Laidley. He wrote of the area: ""The soil appeared of a rich description partaking of a loam, with a decomposition of the Traprocks of the surrounding hills.  This fine timbered land, which I have named Laidley's Plain (as a compliment to our present Deputy Commissary-General), would therefore produce very heavy crops of maize and other grain and is naturally clothed with an abundance of excellent pasture."

* In 1861 Hermann Neumann arrived in Australia from East Prussia.

* The railway line arrived in the district in 1866.

* By 1879 it had been officially proclaimed although it wasn't until 1902 that the Laidley borough was officially announced.

* In 1893 Hermann Neumann moved to Laidley from Ipswich.

* In 1980 the Neumann family gifted Das Neumann Haus to the local community.

There is a useful local website. Check out http://luvyalockyer.com.au/pages/welcome/. 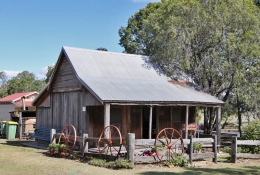 The old bark hut at the Laidley Pioneer Village Museum. 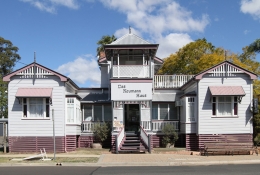 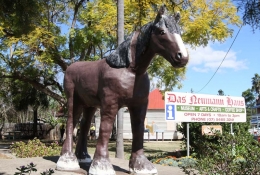 The statue of the Clydesdale outside the Das Neumann Haus. 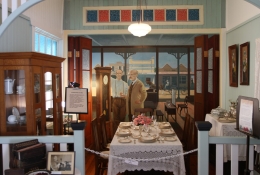 In Das Neumann House, Hermann Neumann admires one of his grandfather clocks in the 1930s dining room. 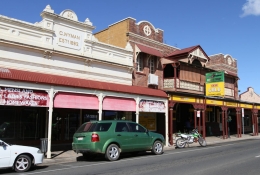 The verandas on the shops and the Exchange Hotel in the town's main street.