Small town scenically located on the shores of Lake Bolac

Lake Bolac is a tiny service centre on the Glenelg Highway between Ballarat and Hamilton. It services the surrounding wheat and cattle area. Its primary appeal is the lake which is a popular recreation destination for people wanting to fish and swim. In the area is the remarkable Narrapumelap Homestead, a French Revival Gothic bluestone building which offers unique accommodation.

Lake Bolac is 224 km west of Melbourne and 100 km west of Ballarat via the Glenelg Highway.

It is probable that "bolac" is a local Aboriginal word meaning "frog" - a common inhabitant of the lake.

Lake Bolac
Lake Bolac, the town, edges a 1460 ha freshwater, tree-lined lake (of the same name) with a 27 km shoreline and a maximum depth of seven metres. The average depth is about 2-3 metres. It has many sandy beaches and, for anglers, is well stocked with trout, yellowbelly, short finned eels, redfin and estuary perch. Boating, sailing, and windsurfing are popular activities. There are picnic areas with electric barbecues; a caravan park; a sporting and recreation complex near the lake shore which has a 9 hole golf course, eight tennis courts, squash courts and netball courts; a number of boat ramps; safe swimming beaches; a solar heated swimming pool; and extensive foreshore camping facilities.
Access to the eastern beach is via the Eastern Beach Road which heads south off the Glenelg Highway east of the town. There is a reserve and a picnic-camping ground. To access the western shore head south of town on the road to Mortlake. Turn left at the Western Lake entrance and follow the shore.

Lake Bolac Hotel
Located on the Glenelg Highway and dating back to 1862 this single storey bluestone building started as a shanty, built by James Brown, in 1856. The shanty was replaced by a wooden hotel which, in turn, was replaced in 1862 by the current building. Amusingly, at various times in its history, the hotel has been used by the local community as a church, a morgue and a barber's shop.

Lions Park Heritage Walk
Located on the Glenelg Highway, the Lions Park Heritage Walk is a 120 metre concreted path with plaques telling the story of Lake Bolac and the surrounding district. There are plaques focussing on the geology, early settlers, the Great Depression, Land Army Girls and the Flax mill, Flora and Fauna, and Extreme Weather Conditions.

Wickliffe
Located 13 km west of Lake Bolac via the Glenelg Highway, Wickliffe is a tiny town on the Hopkins River. Of particular interest are the old Presbyterian Church (1861) and the historic homestead, Narrapumelap, which was built in 1873.

Presbyterian Church
Located in Wyselaskie Street, this historic Presbyterian church (now a Uniting Church) is made of bluestone with Waurn Ponds stone dressings. It was built in 1861 and a tower was added in 1878 to the design of Alexander Davidson.
The highlight of the church is the tower which is in a French Decorated Gothic style with a weather vane and gargoyles. These features show the influence of the French architect and historian Viollet-le-Duc, who influenced Alexander Davidson. Check out the Victorian Heritage Database at https://vhd.heritagecouncil.vic.gov.au/places/67267 for more details.

Narrapumelap Homestead
Located on Narrapumelap Road is 'Narrapumelap', a gracious and beautiful French Gothic Revival homestead which is considered one of Australia's finest examples of this style of architecture. It was built 1873-1878. The Victorian Heritage Database notes that it was "Designed by architects Davidson and Henderson, the single-storeyed bluestone house is asymmetrically composed with a central projecting gabled wing, turret and tower. There are bow and bay windows at the ends and a cast iron verandah. The remains of the interiors are notable. 'Narrapumelap' Homestead, Wickliffe, is a homestead complex of singular architectural importance both for its distinctive detailing and as a rare example of the Picturesque Gothic Revival style." Check out https://vhd.heritagecouncil.vic.gov.au/places/1215 for more details. The mansion's dominant feature is a beautiful bluestone tower. Wrought iron gates open onto a carriageway surrounded by fine landscaped gardens and much of the house is ivy-covered. The west wing is available for overnight and weekend accommodation. For bookings check http://www.narrapumelap.com.au or tel: (03) 5350 3220.

* Prior to the arrival of Europeans the area was home to the Djabwurrung Aboriginal people.

* In the early 1860s a township was surveyed and named Parupa.

* In 1862 town lots were offered for sale. The Lake Bolac Hotel was opened that year.

* In 1868 a bluestone general store was opened.

* In 1872 the local Catholic Church was consecrated.

* By 1878 there was a Presbyterian Church in the town.

* In 1903 the first of the large properties around the town was subdivided.

* After 1918 large properties in the district were broken up for soldier settlers.

* During World War II flax was grown in the area and a flax mill was built.

* By the 1950s more land in the district was being allocated to soldier settlers.

* In 1957 a high school was established in the Presbyterian Church.

There is a useful local website. Check out https://lakebolac.com.au. 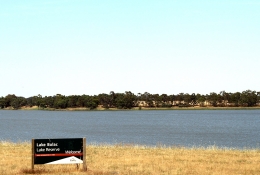 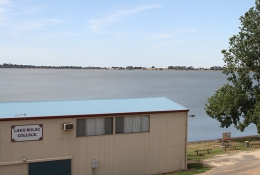 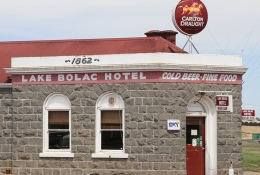 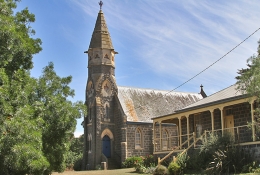