Lake Grace is a small sheep and wheat town characterised by grain silos, bulk loading facilities and single pub. The district is a major grain-growing region for wheat, canola, oats, barley, lupins and other legumes. The primary appeal of the district lies in its natural beauty which includes distinctive eucalypts (Salmon Gums, Kondinin Blackbutts and mallees) and salt lakes. Paddocks of wheat and canola form patterns across the landscape, and the magnificent sunsets and immense night skies make the district a memorable wheatbelt experience.

Lake Grace is located 344 km south east of Perth via Pingelly and Wickepin.

In 1909 the district surveyor, Marshall Fox, named the lake after Grace Brockman, the wife of the Surveyor-General,  Frederick S. Brockman. Grace Brockman later became Grace Bussell and achieved fame in 1876 when she and a stockman, Sam Isaacs, rescued people from a shipwreck at the mouth of the Margaret River.

Lake Grace Story Trail
The Lake Grace Visitor Centre has a map of the Story Trail which is a collection of plaques located on the footpath of the main street which tell the story and recount the heritage of the town. The walk takes around 30 minutes and passes the Electrical Shop, the Post Office, Lake Grace Hotel, the local Cabinetmaker's shop, the Visitor Centre and the Railway Station. There are ground plaques, signs and artworks which all tell the story of the town.

Australian Inland Mission Hospital
Located off Stubbs Street,  Lake Grace Australian Inland Mission Hospital was established in 1926 after the Reverend Dr John Flynn had inspected the site in 1922-1923. The Western Australian Government agreed to subsidise the building of the hospital which was opened in October, 1926 with two nursing sisters. From the outset the hospital served an area of 16,000 square kilometres from Ravensthorpe in the east to Wagin in the west and from Pingrup in the south to Pingaring in the north. It ceased operating in 1952 and was replaced by the Lake Grace Memorial Hospital. After 1952 the building was used as staff accommodation and as a residence for local schoolteachers. By 1983 it was vacant but locals saved the building and in 1992 it was opened as the Lake Grace Australian Inland Mission Hospital Museum. It is the only AIM Hospital left in Western Australia and only one of three in the entire country. Visitors can walk through the old wards, inspect the duty room, kitchen and laundry. Be sure to park at the pull-off  bay and walk along the Penny Pathway to the entrance - it tells the story of the AIM through a series of signs. Then take a stroll over to the water feature and colourful Mosaic Garden Gallery near the Medical Centre. To access the museum - check at the Lake Grace Visitor Centre

Mosaic Garden Gallery
Located next to the town's Medical Centre on Memorial Drive, this is a collection of 365 mosaics depicting the past and present members of the Lake Grace community. The sign at the beginning of the walk explains: "More than 360 colourful mosaics reflect our lives, past and present, and the many stories that make up our community. Created by local people from 2002 to 2005, the mosaics show farms, school, family histories and life in a rural town. Kerrie Argent, local artist and nurse, designed the project to raise the morale of a community experiencing a long drought."

Pioneering Women Mural
The Pioneering Women Mural is located in the main street opposite the Visitor Centre. It features images of 48 women who were pioneers of the district from European settlement to the present. There is a book about the women which is available at the Visitor Centre. The mural was painted in 1998 by mural artist Irene Osborne assisted by Kerry Argent, Margaret Carruthers, Catherine Hendry, Bambi Lay, Annie Slarke, Judy Stewart and Anna Strevett.

Lake Grace
Lake Grace is located 10 km west of the town of Lake Grace. The two lakes - Lake Grace North and Lake Grace South - are part of an ancient river system which probably flowed more than 20 million years ago but was reduced to a lake about 5 million years ago and gradual silting made it into the shallow lakes which exist today. The lake system is 25.75 km long and 7.24 km at its widest point.
The clearing of the land around Lake Grace at the turn of the century has resulted in the whole area experiencing long term salinity problems as the water table rises to the surface bringing dissolved salts with it. Interestingly the lakes still flow underground and head north to Kondinin before moving westward and becoming part of the headwaters of the Avon River.
Entry to Lake Grace township from Dumbleyung involves crossing a narrow causeway across the lake which offers an excellent opportunity to observe the level of salination in the lake.
The area around Lake Grace is noted for the variety of small mammals including the western mouse, white tailed dunnart, Mitchell's hopping mouse and the ashy-grey mouse. The flora includes Samphire, a pink and green succulent, and low shrubs such as Swamp Sheoak, Saltwater Paperbark and TeaTree. Taller trees such as Kondinin Blackbutt and Salmon Gum can be seen beyond the lake's shores.
The excellent downloadable brochure Lake Grace Salt Lake (http://docs.wixstatic.com/ugd/0a4644_ece9c0f19751478384345fd330c2401c.pdf) notes that: "This environment provides an important habitat for a variety of birds. At times, the lake and its shoreline become breeding grounds for waders, ducks and even Black Swans. The samphire marshes fringing the lake are favoured by Banded Stilts endemic to Australia. In wet years or after flood events, thousands of Banded Stilts - plump-bodied birds with long orange legs - flock to the lake to breed in the shallow, saline waters. At one stage, more than 12,000 Banded Stilts were counted at Lake Grace, accounting for a significant percentage of their national population. The surrounding bushland is home to birds such as Wedge-tailed Eagles, Tawny Frogmouths, honeyeaters, parrots and more. A variety of small mammals, including the Western Mouse, White-tailed Dunnart and Mitchell’s Hopping Mouse, inhabit the area, along with kangaroos, wallabies, echidna and various reptiles.
Lake Grace can be viewed from the visitors’ information bay on its western side, where the Collie - Lake King Road crosses Lake Grace North. Panoramic views of the lake system can be seen from Lake Grace Lookout, a further two kilometres to the west.

The Jam Patch
Located 19 km north of Lake Grace (17 km along the Kulin-Lake Grace Road and 2 km on the North Lake Grace-Karlgarin Road), the Jam Patch (it is named after the Jam Trees (Acacia acuminata) in the area) is a 200 ha bushland reserve which is ideal for birdwatching, wildflowers (in the spring) and picnics. There are three nature trails:
Red Loop Trail - which is 1.8 km and takes around 45 minutes. It passes through stands of salmon gum, jam wattle and sheoaks, past granite outcrops and along the shore of the lake.
Green Loop Trail - is 2.5 km and takes around 90 minutes. It passes two granite outcrops and has some uneven, steep sections.
Blue Loop Trail - is 1.5 km long and takes around 45 minutes. It passes around the shoreline and passes saltbush and eucalypts while traversing the shoreli

Roe Heritage Trail
In the Bicentennial Year (1988) the Western Australian government developed a series of Heritage Trail brochures which covered the entire state. The Roe Heritage Trail was unusual and interesting. It covered 23 km of the route J.S. Roe took in the last days of October 1848.
Surveyor General John Septimus Roe was the first person to explore the Lake Grace district. He passed through the area south of the present townsite in 1848 and named Mt Madden, the most prominent granite outcrop in the area.
Roe was on an expedition to survey and explore the south-east interior of Western Australia. He was accompanied by two soldiers from the 95th regiment, two members of the Surveyor General's Department, and an Aboriginal guide named Souper.
The Roe Heritage Trail starts at Roe Hill near the Old Newdegate Road which is to the west of the main Ravensthorpe-Lake King road. It was here that Roe's party split with one half moving towards Lake King while the other half travelled towards Mt Madden.
The two groups joined up at the base of Mt Madden which Roe named after Dr Richard Madden, Western Australia's Colonial Secretary. Mt Madden is now a popular picnic location and the climb to the top of the outcrop, which is 386 m above sea level, is quite easy and affords excellent views over the surrounding countryside.

White Cliffs
White Cliffs, an interesting geological feature and local picnic spot, is located 17 km South of Lake Grace, the cliffs are a mixture of granite, quartz and soft white kaolin. They are on private property and can be viewed by contacting the Visitor Information Centre.

Varley Rabbit Cemetery
Located at Varley, 130 km east of Lake Grace (but in the Shire), the Varley Rabbit Cemetery is an amusing (but serious) memorial to all the rabbits who died on the Rabbit Proof Fence which was constructed through the area. The plaque at the location records "In memory of all the rabbits who lost their lives at the Rabbit Proof Fence." The fence, known as No.1 Fence, stretched from the south coast near Hopetoun to Eighty Mile Beach on the Indian Ocean north of Port Hedland. It was a staggering 1,139 mile (1,833 km) long and was, not surprisingly, the longest unbroken fence in the world. The memorial is hard to take very seriously as the rabbits were capable of getting across the fence relatively easily and, by 1902 when the fence was started, they were such a pest, particularly as far as grass and grazing country was concerned, that the state was prepared to pay a huge sum to build and maintain the fence in an attempt to stop.

* Prior to the arrival of Europeans the area had been home to the Nyoongar Aboriginal people for at least 40,000 years.

* The first European to explore the area was Surveyor General John Septimus Roe who passed through the area south of the present townsite in 1848 and named Mt Madden, the most prominent granite outcrop in the area.

* Holland's Track from Broomehill to the goldfields was cut by John Holland in 1893 but did not encourage people to move into the area in significant numbers.

* In 1907 the Lands Department named the town and surveyed land in the area.

* The tiny settlement of Newdegate came into existence in 1924.

* An Australian Inland Mission Hospital was built in the town in 1925 and opened in 1926.

* The villages of Varley and Lake King were established in 1928.

* In 1992 the AIM Hospital opened as the Inland Mission Hospital Museum.

* In 1998 the impressive Pioneering Women Mural was painted.

The official website for the Shire of Lake Grace can be found at http://www.lakegrace.wa.gov.au. 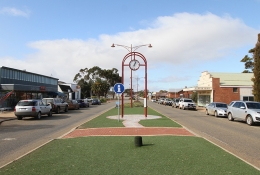 The main street of Lake Grace 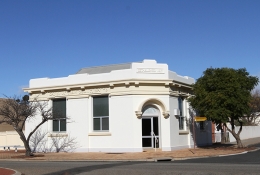 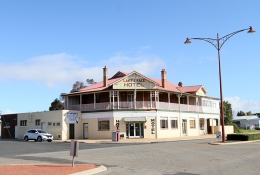 The Lake Grace Hotel in the main street 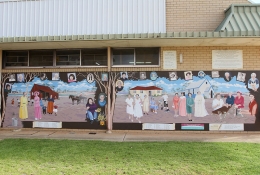 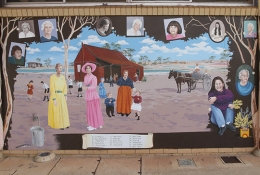 Detail of the Pioneering Women Mural 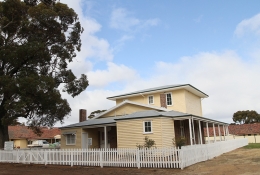 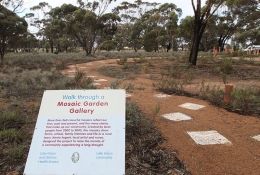 Mosaic Garden Gallery near the Hospital 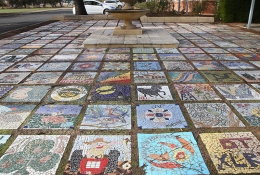 Part of the Mosaic Garden outside the hospital 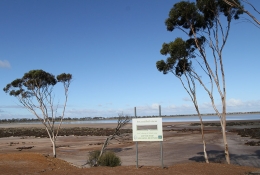 The view over Lake Grace at a time of drought