Lake Macquarie is the largest coastal saltwater lake in the Southern Hemisphere. It covers approximately 120 square kilometres (four times the size of Sydney Harbour), is 24 km long, 3.2 km at its widest point and 9.7 m at its deepest. The lake's foreshore consists of 174 km of bays, beaches and headlands. There are 92 towns and villages, 29 public boat ramps, 28 public jetties and wharves and 7 marinas around the lake.
Lake Macquarie reaches the ocean by a narrow channel at Swansea Heads. It has never really developed as a port or harbour because the entrance is narrow and it has been almost enclosed by dangerous, shifting sandbars. Also the proximity of Newcastle Harbour to the north ensured that there was a good local alternative.
The eastern shore, which stands on a relatively narrow strip of land between the lake and the ocean, is well-developed and popular as a holiday destination. The western side is quieter and more rural with bushland along the shores and the Watagan Mountains rising to the west. The southern shore is characterised by bushland and wetlands while the northern shore dissolves into the Newcastle suburban sprawl. At the northern end there are flotillas of bobbing boats and white, flapping sails which crowd the lake and fishing and swimming are popular. At the southern end small towns nestle into the wilderness. Most of the destinations are designed to take full advantage of the views across the lake. It remains a largely unspoilt holiday destination with few overseas visitors and locals tending to prefer the warmer resorts in Queensland, Thailand or the South Pacific.

Lake Macquarie is located 134 km north of Sydney via Highway 1 (the Pacific Highway).

The lake was known briefly as Reid's Mistake because the first European to explore it was Captain William Reid who was sent from Sydney in 1800 to explore the economic potential of the Hunter River. He did not realise that he had entered the mouth of Lake Macquarie and it was not until he returned to Sydney Town that he realised his mistake. The amusing error was corrected in 1826 when the lake was renamed in honour of Governor Lachlan Macquarie.

Many of these destinations are mentioned in the specific entries on other towns. Of particular interest (and not mentioned elsewhere) are:

Warners Bay
One of the highlights at Warners Bay is the 2 km Sculpture Walk which runs along the shoreline from Eleebana to Boolaroo and Booragul. "Visitors can meet at the first artwork, ‘Beach Blossom,’ at Eleebana Lions Park, and walk or ride a bicycle, stopping off at sculptures on the way to the Lake Macquarie City Art Gallery. Artworks on the trail include a flying pig, a Buddhist monk, a mauve bust of Charles Darwin and a hooded figure surveying the view across the lake," notes the Street Furniture website. Check it out at https://streetfurniture.com/projects/warners-bay-foreshore. They describe, in great detail, the impressive range of seats and benches they have installed along the foreshore. The sculptures include Guy Maestri's (an Archibald Prize Winner) bronze bust – painted pink – of Charles Darwin; hai sculptor Naidee Changmoh's three-metre-tall bronze statue of a young Buddhist monk and Chinese artist Guan Wei’s bronze sculpture of a flying pig on top of a cloud – called No.1 Sky Pig. There are 3D murals by Scott Jansen at Belmont and Toronto, the ends of the walk.

Lake Macquarie City Art Gallery and Sculpture Park
The Lake Macquarie City Art Gallery is surrounded by a 5 ha park which runs down to the lake shoreline. It has an impressive collection of sixteen sculptures. Check out https://mac.lakemac.com.au/Visit/Sculpture-Park where there is access to a downloadable brochure, with a detailed map, on the Sculpture Park and a brochure titled Sculpture Park Discovery Trail.
The three examples included in the photos on this site are Tarifa O Tagaloa by Fatu Feu'u; Aeolian Tree by John Turier and Cardinal Point by Braddon Snape. The brochure provides detailed histories of the sculptors and specific descriptions of the materials used in each sculpture.

1. The Awaba Bay portion which consists of 43.2 ha with 1.6 km of foreshore on the western side of the lake between Bolton and Marmong Points.

2. There is 42.3 ha of bushland at Wangi Point with approximately 2.9 kilometres of foreshore. Wangi Point is also surrounded by residential development and provides recreation for locals, and cabin, van and tent accommodation for visitors in the Tourist Park.

3. At Myuna Bay, 11 ha and 1.1 km of foreshore are part of the State Conservation Area. The reserve seems to be used primarily for fishing.

4. The Morisset portion conserves 174 ha and 4 km of foreshore around the Morisset Hospital complex.

5. The Chain Valley Bay portion conserves 272 ha of bushland behind 600 metres of foreshore on the south eastern side of the lake. Locals and anglers are the main users of this section of the park.

6. Point Wolstoncroft conserves a narrow peninsula of 107.8 ha with 6 km of foreshore on the south eastern shore of the lake.

7. Pulbah Island Nature Reserve is a 70 ha nature reserve situated in the south of Lake Macquarie. Prior to 1917, the island was Crown Land leased for grazing. A trust similar to the Taronga Zoo Trust was formed in 1920 to manage the island as a sanctuary and a variety of native animals were introduced. This use ceased around 1942. The island was dedicated as a nature reserve in 1970. Pulbah Island is a significant place in Aboriginal culture and was declared an Aboriginal place in 1982. The island is used for bushwalking and picnicking.

8. Moon Island Nature Reserve is a small flat plateau lying at the entrance to Lake Macquarie, 600 metres east of Swansea Heads. The island is 250 metres long and 90 metres wide covering an area of 2.25 ha. Moon Island was declared Moon Island Faunal Reserve on 1 April 1960 under the Fauna Protection Act 1948. There is a navigational beacon on the northern side of the island. Rock fishing and bird watching are the main recreational activities.

* As Newcastle has continued to spread south, the desirability of lakeside residences has seen the population around the lake greatly increase.

The local council has its own website which offers advice on accommodation, attractions and eating. Check out http://www.visitlakemac.com.au. 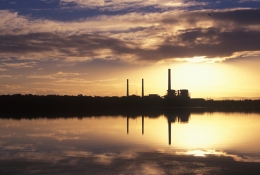 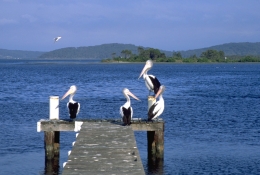 Pelicans on a jetty at Carey Bay looking across Lake Macquarie. 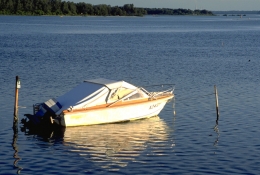 A boat on Lake Macquarie from Carey Bay. 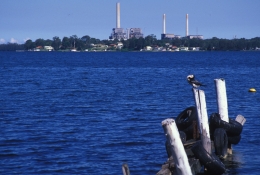 Looking across Lake Macquarie at the Vales Point Power Station. 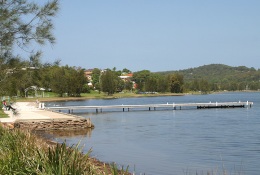 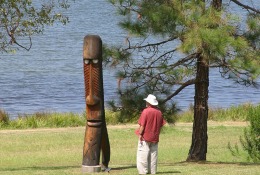 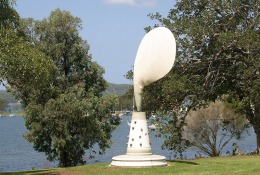 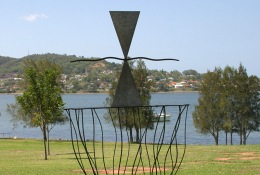