Charming rural town at the centre of Victoria

Lancefield, which is reputedly the geographic centre of Victoria, is a charming country town which, in recent times, has become a pleasant day trip from Melbourne and consequently is known as a place for the arts, antiques and interesting cafes. It also has become the centre of a popular wine growing area with a number of excellent cellar doors. The High Street is a broad, tree-lined street with a number of attractive 19th-century buildings. In recent times Lancefield's proximity to Melbourne has made it attractive to commuters.

Lancefield is located 73 km north of Melbourne via Lancefield Road. It is 476 metres above sea level.

The town was named after the Lancefield Pastoral Run, the first run in the area, which had been taken up around 1838.

Macedonia at Lancefield
Located at 72 Main Street, the town's architectural highlight is the Old Macedonia House which was built in 1889 as a deluxe three-storey, 55-room hotel to cater for Melbournian visitors. After being a hotel it became a boarding house, Army offices, a clothing factory, a private residence, the Antique Centre of Victoria and now Macedonia at Lancefield, tel: (03) 5429 1666.
There are three floors of furniture, decorative arts, clocks, books, pianos, tools, paintings, jewellery and other items from the Georgian, Victorian and Edwardian eras. There is a cafe which extends out onto the second-floor balcony where you can purchase anything from a Devonshire tea to a full meal. It is recorded by the Victorian Heritage Database. Check out http://vhd.heritagecouncil.vic.gov.au/places/68853/download-report.

Lancefield Courthouse Museum
Located at 55 Main Road in the old Lancefield Courthouse, and open from 10.00 am - 2.00 pm Monday, Wednesday and Friday, the local history museum has extensive archives dealing with the Shires of Lancefield, Springfield and Romsey, tel: Robyn 0418 172 659. Check out http://www.lancefieldcourthouse.org.

Fossils in the Area - Megafauna Swamp
The Megafauna Swamp, which is located on the south-western edge of town (adjacent to Lancefield Park Recreation Reserve - access is via Park Lane) is an area of 2000 square metres where, in 1843 the Melbourne engineer, James P. Mayne, discovered the skeletons of about 10,000 animals in a 20 cm thick bed of bones. There is a diverse range of extinct megafauna including Macropus titan (a kangaroo twice the size of today's largest relative - it was 150 kg and was an ancestor of the Eastern Grey Kangaroo), Diprotodon (a rhinoceros-sized wombat which weighed up to 3 tonnes), Zygomaturus (a kind of hippopotamus which weighed more than 500 kg), a short-faced kangaroo (Sthenurus), Propleopus (a 70 kg rat kangaroo) and Genyornis newtoni (a giant flightless bird which stood 2 metres tall and weighed more than 200 kg). There was also the tooth marks of Thylacoleo carnifex (the marsupial 'lion' which weighed around 100 kg) and 26,000-year-old human artefacts which, together with carbon-dated bones, indicate that people lived with Australia's megafauna for a period of some 7000 years.
The concentration of bones could indicate either the congregation of animals around a water source in a drought period or the usage of the waterhole as a hunting spot either for the marsupial 'lion' or for human beings - there is evidence that Aborigines were in the area when the megafauna was still there - or both. For more information check out http://www.lancefield.org.au/megafauna and https://www.facebook.com/lancefield.megafauna.

Lancefield Park Recreation Reserve
Lancefield Park Recreation Reserve, which is located on the south side of Chauncey Street, was established as a 40 acre reserve (16 ha) reserve in 1879. It is now home to the famous Megafauna Swamp, more than 300 trees which have been planted since 1887, and is home to 15 sports groups. The park includes the megafauna dig area; a sculpture of a Diprotodon and a Megafauna Chainsaw Sculpture Tree.

Mount William Quarry
The Mount William Stone Axe Quarry is a prehistoric Aboriginal site known to the local Wurundjeri Aborigines as Wil-im-ee Moor-ing. It was a greenstone quarry and was an important source of raw material for the manufacture of greenstone ground-edge axes which, evidence has revealed, were traded over a wide area of south-east Australia.
The quarry comprises the remains of hundreds of mining pits and the mounds of waste rock where Aboriginal people obtained greenstone (diabase), and manufactured stone blanks for axe heads. Chipped and ground stone axes (some of them beautifully polished) or hatchets were important Aboriginal tools and the Mount William greenstone was prized and extensively traded. For more information check out http://www.lancefield.org.au/mount-william-quarry. The website has genuinely fascinating contemporary accounts of bartering the stones and the ownership and management of the quarry. There are occasional tours of the quarry which are usually held during the Lancefield Agricultural Show and the Lancefield Megafauna Festival.

Romsey to Lancefield Cycle Track
The Romsey to Lancefield Cycle Track starts at the Lions Park Reserve in Romsey, covers a total distance of 15.9 km, has an elevation of 151 metres and takes about an hour. The brochure, with map, which can be downloaded and printed at https://www.visitmacedonranges.com/wp-content/uploads/2016/03/Romsey-to-Lancefield-Return.pdf describes the route as "Running parallel to Melbourne - Lancefield Rd on the Federation Trail, this ride mostly travels along a dedicated shared path for cyclists and pedestrians. As you leave Romsey’s main street, the trail becomes a well formed granitic sand surface and the surroundings transform from classic Australian architecture to expanses of rolling farmland. Enjoy a meal in Lancefield or treat yourself post ride with lunch at one of Romsey’s cafés or restaurants."

Edgar's Mission
Located at 81 Bridies Lane, Edgar's Mission is a not for profit farm animal sanctuary for rescued farmed animals - lots of pigs, lambs, goats, calves, chickens, cats and rabbits. It has over 350 residents on 153 acres (62 ha). They state their mission as: to make the world a better place for humans and non-humans. At Edgar’s Mission visitors are taken on a guided journey around the property. There is an opportunity to spend time with the residents and to take a walk along the Kindness Trail. Tours operate during the warmer months, bookings are essential. For bookings and more information check out https://www.edgarsmission.org.au.

Wineries and Vineyards
There is detailed information about the many wineries in the area. Check out https://www.visitmacedonranges.com/village/lancefield.

* Prior to the arrival of Europeans the area was home to the  Wurundjeri Aboriginal people (a sub-group of the Woiwurung).

* In the area the Mount Willliam Quarry was used to manufacture stone axes. It operated for thousands of years.

* By 1859 a hotel and a general store had opened near a ford across Deep Creek.

* In 1860 Burke and Wills camped at Lancefield. It was their fourth camp out of Melbourne.

* A hotel was opened south of the present town site in 1862.

* The local Anglican Church was consecrated in 1868.

* In 1869 a drapery store was opened in Lancefield by Francis Foy. He called it Mark Foy, after his son.

* The town's Mechanics Institute was opened in 1877.

* The town entered a boom period in the 1880s when it became a popular summer resort for Melbournians.

* The railway from Clarkefield opened in 1881.

* A Catholic school was established in the town in 1885.

* In 1890 Lancefield became a separate shire. It separated from Romsey Shire.

* In 1970 the opening of the Tullamarine Freeway saw the town develop as a commuter belt for Melbourne.

There is a useful community website. Check out http://www.lancefield.org.au. 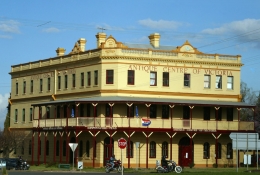 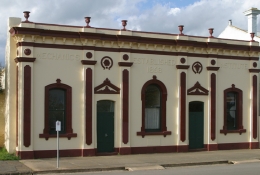 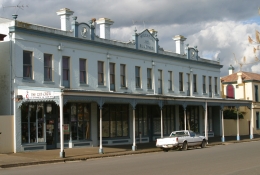