Landsborough is one of those towns which, because it lies 20km inland from the coast, has managed to retain much of its old world charm. While the coast has become a great drawcard for holidaymakers and retirees, the town of Landsborough has remained peaceful, charming and largely unchanged. Today tourism has arrived and the surrounding area has such popular attractions as the Big Kart Track and Steve Irwin's Australia Zoo.

Landsborough is located 80 km north of Brisbane via the Bruce Highway and Steve Irwin Way. It is 20km west of Caloundra lying at the southern end of the Blackall Ranges and just north of the Glass House Mountains.

Landsborough was named after the explorer William Landsborough (1825-1886) who settled in the Golden Beach area in 1881-1882. Landsborough township was known as Mellum Creek from 1871-1891. Mellum is said to be a local Aboriginal word for volcano. Mellum Creek township name was changed in 1891, after the railway went through the town.

Landsborough Museum
The Landsborough Museum is recognised as one of the best social history museums in Queensland. Located in the old Landsborough Shire Council Chambers (1924) with a mud brick extension (1988) it has an extensive collection of folk memorabilia which recalls the early history of the district.  It is located at 4 Maleny Road and is open Wednesday,Thursday, Friday and Sunday from 9.00am to 3.00pm, tel: (07) 5494 1755. Check out http://landsboroughmuseum.org.au/

Australia Zoo
3.5 km south of Landsborough via the Steve Irwin Way is Australia Zoo, the major tourist attraction created by the late Steve Irwin, The Crocodile Hunter. The zoo is constantly expanding. At the moment it occupies over 40ha and contains around 1000 species. It is a careful mix and match of Australian animals (kangaroos, dingoes, echindas, koalas, possums, Tasmanian devils, wombats, crocodiles, snakes), popular international animals (cheetahs, elephants, giraffes, lemurs, red pandas, tigers, rhinos) and endangered animals. Demonstrations include feeding elephants and kangaroos and, for a cost, actually get up close and personal with Komodo dragons, wombats, tigers, cheetahs and many others. In 2013 the prices ranged from $30 to make physical contact with a giant tortoise to $500 for 3-4 people to walk with and pat a tiger.  The zoo is open daily from 9.00am to 5.00pm. For detailed information about pricing and arranging a tour which experiences all the feeding times check out tel: (07) 5436 2000 or http://www.australiazoo.com.au.

* The first European settler in the district was a man named Isaac Burgess who arrived in 1871. The tiny settlement became known as Mellum Creek and quickly established itself as an important stopover on the Cobb & Co route from Brisbane to the goldfields at Gympie. The business prospered and six years later Burgess had built a two storey hotel, a store and a butchers shop and had made so much money he had purchased 572 acres (232ha) of prime local land. The town at this time was known as Mellum Creek.

* the other major industry in the district in the 1870s and 1880s was timber cutting. The system was relatively simple. The timber cutters found stands of red cedar, beech, hoop and bunya pine in the Blackall Ranges, cut them down, and transported them overland to Mellum Creek where they were floated downstream to waiting steamers.

* The township of Landsborough was named after the famous explorer William Landsborough (1825-1886) who was chosen by both the Queensland and Victorian governments to lead the search for Burke and Wills. Although he did not find the lost explorers, he he became the first explorer to cross the continent from north to south. He sailed to the Gulf of Carpentaria in November 1861 and over the next year travelled south until he reached Melbourne. In 1882 the government rewarded Landsborough for his explorations with a gift of £2000. He used the money to buy a property at Caloundra which he named Loch Lamerough. He died four years later. The town of Landsborough honours his part in opening up large grazing areas - particularly the Bowen Downs - in western Queensland.

* In 1890 he railway arrived at Landsborough. The town continued to grow but it was overtaken by the larger township on the coast and the increasing importance of tourism in the region. 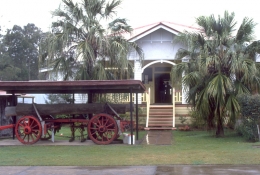 The Landsborough Museum (circa 1990) 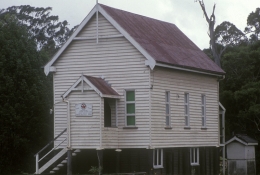 The Uniting Church, Landsborough (1990) - a church in the style of a classic Queenslander.