Laura is one of those tiny places that it is easy to drive through unless you want petrol or a beer. In fact the remarkable Quinkan and Regional Cultural Centre is worth visiting and the Aboriginal art in the rock galleries around the settlement is simply amazing. Anyone interested in Aboriginal art will be staggered at the richness, strangeness and beauty of the images which cover wall after wall of the rock galleries which are hidden far from where anyone but the guides can venture. An unforgettable experience.

Laura is a few buildings, a roadhouse and a pub on the main Cape York road, the Peninsula Development Road, 310 km north west of Cairns and 1,992 km north of Brisbane.

In 1873 the area was explored by Archibald Macmillan who named the local river, Laura, after his wife.

Quinkan & Regional Cultural Centre
The perfect place to start any exploration of the Laura area is the Quinkan & Regional Cultural Centre. Recognised as a world-class interpretation centre, it looks at the totality of life in the Laura area with exhibitions including the Laura Aboriginal Dance Festival, the Races and Rodeo Weekend, life on the early stations in the area, School Days in Laura, a language room and a room with the history of contact between Europeans and the local Aborigines, a video recording life in the area, a set of autobiographical boards recording the different Aboriginal language groups in the district, the story of the mailmen and the telegraph line, the gold mining era from 1874-1890s, the presence of the Chinese in the district, a record of traditional Aboriginal life with information about bush tucker and hunting and gathering, and the rock art of the Quinkan country. It is an exceptional display which demands that you spend hours going through the different galleries.

Aboriginal Art Works
The importance of Laura lies in its remarkable Aboriginal artworks. It is recognised as one of the most important archaeological study sites in Australia. Archaeologists have found evidence that the rock art is at least 15,000 to 30,000 years old.

The area is famous for its strange mythical  figures known as Quinkans. The excellent brochure provided at the Quinkan & Regional Cultural Centre explains that "Quinkan is an Aboriginal name for the supernatural spirits that live in the surrounding sandstone and are painted in the rock art around Laura. The Quinkans do their work at night.

"Timaras or Tall Spirits are the good spirits. They have long-limbed, thin bodies which provide camouflage among the trees, and also allowing them to quietly withdraw into rock crevices.

"Imjims are the bad spirits and have a distinctive long, bulbous-tipped appendage. They bounce like kangaroos and live like frogs."

There are literally dozens of Aboriginal art sites in the area. The most popular sites are Yalangi Galleries (a 2 - 3 hour guided walk), Mushroom Rock (2 hours), Giant Horse (3 hours) and the Quinkan Galleries (2-3 hours). Perhaps the most famous of all the galleries is the Giant Horse Gallery which features a horse, a fallen rider and a variety of animals including a sting-ray and bush turkey.

Guided tours can only be booked through the Quinkan & Regional Cultural Centre, including tours to Split Rock, Mushroom Rock, Giant Horse Gallery and the Quinkan galleries.

Split Rock Gallery
Split Rock is a self guided site, located 12 kms south of Laura and is well set up with boardwalks, interpretative information, toilet and car park. An honesty fee of $30.00 is applied to cover basic maintenance costs at the site. There is a problem: people are not paying. They are not honest. And there is a suggestion that it should be closed. Respect the modest amount being asked to maintain the site.

* Prior to European settlement four language groups of First Nation people had lived in the Laura area for at least 45,000 years - the Ku Ku Thaypan, Uw Olkola, Guugu Yimithir and Western Yalanji people.

* In 1606 the First Nation people of Cape York made contact with the Dutch explorer, Willem Janszoon, who charted the shoreline and landed at Pennefather River in the Gulf of Carpentaria.

* In June and July, 1770 Captain James Cook spent seven weeks repairing his ship at what is now Cooktown.

* The Laura River was explored and named by Archibald Macmillan in 1873 - he named it after his wife. This year was also the start of the Palmer River goldrush.

* The following year cattle were brought into the area by James Earl and by 1874 Laura was catering for the miners who were making their way from Cooktown to the goldfields at Palmer River.

* In 1874 the packhorse mail service to Cape York began and came through Laura regularly.

* In 1887 an overland telegraph line was constructed through Laura and on to Cape York. Around this time 18,000 Chinese were living on the Palmer River goldfields.

* A railway line between Cooktown and Palmer River reached Laura in 1888. The decline of the goldfields meant that Laura became the terminus for the route. It is claimed that at the peak of the goldrushes to Palmer River the railway was carrying more than 20,000 passengers a year.

* A year after the arrival of the railway a school was established. It lasted for 13 years. No Aboriginal children were admitted.

* 1897 saw the first Laura Race which are still held every year.

* In 1928 two New Zealanders riding in a Baby Austin successfully made the journey from Cairns to Cape York passing through Laura.

* In the 1970s the Ansett pilot, Percy Trezise, and a local First Nation artist Dick Roughsey collaborated on a series of children's books which tell the Aboriginal legends of the area. The best known of these are The Rainbow Serpent and Banana Bird and the Snake Man.

* In 1981 the first Laura Aboriginal Dance Festival was held. It still runs today.

The Quinkan & Regional Cultural Centre has an excellent website. Check it out at http://www.quinkancc.com.au/ 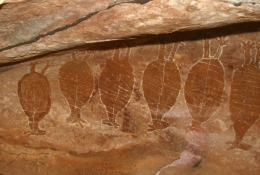 Paintings of fruit bats upside down on the cave wall at the White Ibis rock art gallery. 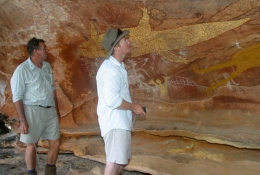 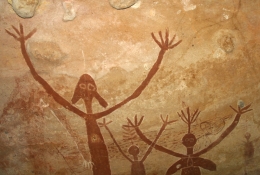 The strange Quinkans - are they human? Why do they look like creatures from outer space? 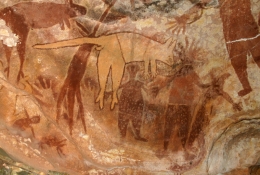 Kangaroos and Quinkans on the wall of the White Ibis rock art gallery. 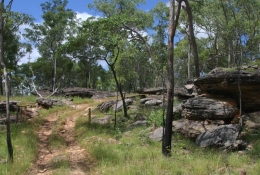 The road to the White Ibis rock art gallery near Laura. Even we got lost. 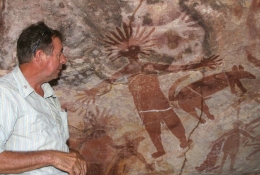 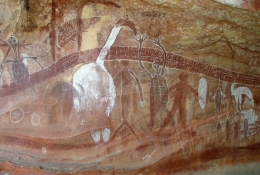 Fish, a white ibis, kangaroos, Quinkans and a huge snake on the walls of the White Ibis rock art gallery.