When the evening sun slants through the gums,
By my forest-rimmed abode
Once more the old clear picture comes,
And my mind drifts down the road;
Back to the town by Beetaloo,
Where the rocky river strays;
Back to the old kind friends I knew
In the dear dead Laura days.
This poem, 'Laura Days' was written by C.J. Dennis to celebrate the town's Golden Jubilee (fifty years) in 1932.
Laura is a small service centre located on the eastern slopes of the lower Flinders Ranges. It has an impressively wide main street which has been beautified by stands of peppercorns and gumtrees. The town was the boyhood home of noted Australian vernacular poet C. J. Dennis whose most famous creation was The Sentimental Bloke. Dennis's father was the licensee of the Beetaloo Reservoir Hotel from 1892 to 1910.

Laura is located on the eastern slopes of the lower Flinders Ranges 226 km north of Adelaide via Port Wakefield and Crystal Brook.

In the early 1870s Booyoolee Run, a pastoral holding, was leased by Herbert Bristow Hughes. In 1872 he surveyed and subdivided the land and named the new town after his wife, Laura Hughes.

Laura Historic Town Walk
This short 1.2 km walk is basically and easy loop up and down the main street with a short diversion into Hughes Street. It takes around one hour and a map is available to download at https://www.walkingsa.org.au/walk/find-a-place-to-walk/discover-lauras-golden-secrets-foot-laura-historical-town-walk/#downloads.

Places of interest include:

C.J. Dennis Sculpture
The statue of C. J. Dennis in the centre of the main street was designed by Dave Griffiths. Dennis remembered his time in Laura with affection. In 1932 he recalled his childhood writing "In sifting through these memories I can discover nought that could be set down in malice, but a very great deal that gives me constant happiness to recall."

A Note on C.J. Dennis
Clarence Michael James Dennis was born in Auburn, South Australia in 1876. His father was a publican and in 1889 he took over the Beetaloo Hotel in Laura. C.J. was first published in the Laura Standard when he was 19. His real fame came with “The Sentimental Bloke”, a cycle of poems about an Australian innocent which caught the zeitgeist perfectly. It was published in 1915, at the height of World War I, was an immediate success, requiring three editions in 1915, nine in 1916, and three in 1917; by 1976 fifty-seven editions had been published in Australia, England, the USA and Canada, selling over 285,000 copies.
It was written in a broad vernacular that working class Australian soldiers would have loved and it was really meant to be read aloud. The most famous section was the hilarious, very Australian, rewrite of Romeo and Juliet titled “The Play”.

Old Brewery
Located at 8 West Terrace, the Old Brewery (now an attractive B&B) is a prominent local landmark. It was built in 1874 and operated as a brewery for the next twenty years until it was closed in 1894. It became a private residence in 1907 and is currently a B&B. Check out https://laurasa.com.au/accommodation/laura-brewery for more information.

Court House
Located in Hughes Street, the classically decorated Old Court House was built in 1878, is now part of the local Rocky River Historic & Art Society. It operated as a Court House for 90 years and, when it closed in 1968, it was taken over and used for regular art exhibitions.

Golden North Ice Cream
There is good reason for Laura to feel proud of Golden North Ice Cream. It has been made in the town since 1923. As early as 1880 the Bowker family were selling fresh milk and cream from their dairy. By 1923 they had established a factory at Laura to produce ice cream. They were important innovators. By 1938 they were selling pasteurised milk and in 1940 they started selling ice cream in half gallon (2 litre) containers. The Bowker family sold the business to Farmers Union in 1983. Check out https://goldennorth.com.au for more information.

Beetaloo Reservoir
Located 20 km west of Laura, the Beetaloo Reservoir was South Australia's first regional reservoir. It was built between 1885-1890 at a cost of £700,000 to supply water to Port Pirie, Moonta, Wallaroo and Kadina - towns on the Yorke Peninsula. Most of the water was used in the Copper Triangle. At the tiime it was the largest concrete dam in the Southern Hemisphere with a capacity of 3180 megalitres, a wall of 210.3 metres with a height of 33.5 metres. The reservoir covered an area of 33 hectares. Today it is used for fishing (it is stocked with golden perch, silver perch and Murray cod) and has picnic and barbecue facilities. It is open 1 May to 1 November, 9.00 am - 3.30 pm on weekdays, 9.00 am - 5.00 pm on weekends. Closed outside this period, on Total Fire Ban Days and for operational activity. Check out https://www.reservoirs.sa.gov.au/reservoirs/beetaloo for more details.

Laura to Stone Hut Rail Trail
RailTrails Australia has an excellent and detailed website (https://www.railtrails.org.au/trail-descriptions/south-australia?view=trail&id=198) which describes the short Laura to Gladstone (2.5 km) and the Laura to Stone Hut (7 km) sections. It explains the history of the route: "A narrow gauge railway once joined Gladstone, Laura, Stone Hut, Wirrabara, Yandiah, Boolero Centre, Perroomba, Melrose, Terka and Wilmington. It started in Gladstone in June 1884 to serve the rapidly developing wheat growing region and was full opened to Wilmington by 1915." and describes the two sections as follows:

* Laura towards Gladstone
This section starts on the southern outskirts of Laura at the welcome to Laura sign and runs south for nearly 3 km towards Gladstone. It is coarse gravel, and would only be suitable for walkers and mountain bikes.

* Laura and Stone Hut
This is a high class rail trail with a good smooth hard packed gravel surface suitable for road bikes. It commences at the northern welcome to Laura sign.

* Prior to the arrival of Europeans the district was home to the Kaurna Aboriginal people.

* By the 1840s there were a number of large pastoral holdings in the area.

* The first European in the area was Thomas Burr in 1842.

* Beetaloo Station had been established as a cattle run in 1844.

* In the early 1870s the pastoralist, Herbert Bristow Hughes, took over Beetaloo Station.

* By 1872 he had surveyed and subdivided much of his holding and named the settlement Laura, after his wife.

* In 1882 the Corporate town of Laura was established.

* By 1884 there was a railway line running from Gladstone to Laura.

* The Laura Standard newspaper was first published in 1889.

* C.J. Dennis worked as a barman for his father in 1898 but they soon fell out and he left and went to Broken Hill.

* The District Council of Laura was established in 1932.

There is a useful and informative local website. Check out https://laurasa.com.au. 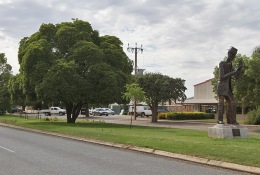 The main street of Laura 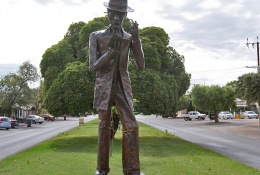 The statue of C.J. Dennis in th main street 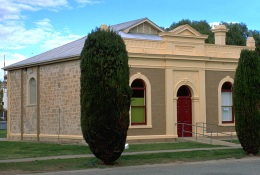 The former Masonic Lodge now home of the Laura Archives