If there is a true Cinderella district on the New South Wales north coast it is the area around Queens Lake and Watson Taylors Lake where the water from the two lakes enters the sea through a narrow passage between North Haven and Dunbogan. To the north lies the prosperous and rapidly growing centre of Port Macquarie. The town of Laurieton is now part of the holiday-cum-urban development which spreads through Lake Cathie, Dubogan, Bonny Hills and North Haven. In fact Laurieton is one of a number of towns and villages which form the straggling lake and coastal community known as the Camden Haven. The other villages include Kew and Kendall on the Camden Haven River.
Laurieton is the most important town in the area. It  is scenically located at the base of North Brother Mountain at the mouth of the Camden Haven Inlet in a setting which combines lagoons and waterways with bushland and some unique views of the Mid-North coast line.

Laurieton is located 361 km north of Sydney via the Pacific Highway and 33km south of Port Macquarie via Lake Cathie and Bonny Hills.

The settlement was originally known as the Village of Camden Haven. In 1872 Joseph Laurie moved from Taree with his brothers Andrew Laurie and Alexander Laurie. Joseph owned rights to timber in the area and a timber mill on the foreshore of the Camden Haven Inlet near where the Fish Co-op stands today. Joseph Laurie became the first postmaster in 1875 and by 1914 a new Post Office had been built in Laurie Street, being called Laurieton by the Post Master General. It was not until December 1946 that the name of Village of Camden Haven was officially changed to Laurieton

Camden Haven Historical Museum
Located at the corner of Bold and Laurie Streets in Laurieton, the Camden Haven Historical Museum is located in the Laurieton School of Arts building. It tells the story of the villages in the Camden Haven Valley as well as focusing on the ship building, timber industry and the day Bob Hope unexpectedly arrived in the town. It is run by volunteers and open from Monday to Saturday 10.00 am to 2.00 pm. Tel: 0408 113 313  or check out http://www.camdenhavenhistoricalsociety.org.

North Brother Lookout
This is one of the most impressive panoramic views on the north coast of New South Wales. Located 5 km up on the Captain Cook Bicentenary Road (it is clearly signposted) the summit of North Brother Mountain (490 metres) offers a superb view over the coastline, the lakes and the mouth of the Camden Haven Inlet. It is one of Australia's most impressive coastal panoramas. The area is characterised by stands of rainforest which are rich in native fauna and flora.

Queens Lake and the Camden Haven Inlet
Laurieton is essentially a river-based holiday destination and, as such, the central appeal of the area lies in Queens Lake and Camden Haven Inlet where the visitor can engage in fishing, boating and walking along the foreshores. An easy access point is the Dunbogan Boatshed which was built in the 1940s and now combines a cafe with bait and tackle, fish feeding and the ability to hire kayaks and tinnies. Check out http://www.dunboganboatshed.com. It is located at 46 The Boulevarde, Dunbogan.

Crowdy Bay National Park
Take the road from Laurieton heading south, cross the Camden Haven Inlet on Diamond Head Road, and you will enter the northern section of Crowdy Bay National Park. The road runs behind a long stretch of beach until it reaches the Diamond Head Camping Ground. The area was first sighted by Captain Cook in 1770. He saw Aborigines standing on what is now known as Diamond Head and named the promontory Indian Head. Indian was a common term for Aborigine at the time. There are a number of popular walks and camping locations within the park. The website (http://www.nationalparks.nsw.gov.au/visit-a-park/parks/crowdy-bay-national-park) lists 14 attractions in the park of which the best walks include:
1. Crowdy Gap Walking Track - a walk of 800 metres (it will take around 30 minutes) through the rainforest from the Crowdy Bay campground to Crowdy Beach. The website explains: "Located in the southern area of Crowdy Bay National Park, Crowdy Gap walking track is an ideal nature trail for the kids, with great opportunities for birdwatching and wildlife-spotting. Passing through rare coastal rainforest of turpentine and scentless rosewood, you might glimpse a regent bowerbird or a swift parrot. Remember to keep looking up in the branches of nearby gums, as you might just be lucky enough to see a koala. There are sweeping views along the coast, with Diamond Head to the north." There is more information at http://www.nationalparks.nsw.gov.au/things-to-do/Walking-tracks/Crowdy-Gap-walking-track.
2. Diamond Head Loop Track - 4.3 km long and taking between 90-150 minutes, this track offers spectacular views (the cliffs rise 113 metres) and passes through a wide range of flora from littoral rainforest to casaurina woodland and heathlands. The website explains: "Passing through heath and forests of paperbark and swamp mahogany, pause to take in the exceptional views at Kylie’s lookout and scan the waters for dolphins. It's thought that Diamond Head draws its name from the quartz crystals in the cliffs and you might see them sparkling in the sunlight. The headland rises dramatically and offers panoramic views across Crowdy Bay, north to Perpendicular Point and south to Crowdy Head. In between are superb sweeps of golden sand, and rising out of the lush forested hinterland, behind you, are the majestic Three Brothers mountains." Check out http://www.nationalparks.nsw.gov.au/things-to-do/Walking-tracks/Diamond-Head-Loop-walk for more information.
3. Kylie's Hut - there is a short loop walk to the hut built for the author Kylie Tennant by Ernie Metcalfe who lived on the headland. He built a hut for Tennant who subsequently gifted it to the park. It was restored in 1980 and is now one of the park's attractions. There is a short walk to Kylie's Beach. Kylie’s Hut was destroyed in the 2020 bush fires that completely burnt out the Crowdy Bay National Park.

Kattang Nature Reserve
This is a small, 58 hectare reserve located 3 km east of Laurieton on Camden Head which has cliffs which rise 40 metres above the Pacific Ocean. It has been listed on the National Estate and is an ideal place for bush walking, bird watching, whale watching and fishing. There are a number of walking tracks from Bergalia Crescent (which runs off Camden Haven Road) and Camden Head Road.
There is:
(a) the Camden Head Lookout walk, also known as the Perpendicular Point Walk, which provides views back on the Camden Haven Inlet and Gogleys Lagoon. It is 3.7 km return (90 minutes) and is excellent for whale watching in season as well as bird watching. The website explains: "From the lookout, you’ll see north to Port Macquarie, south to Diamond Head, and southwest to the dramatic North Brother Mountain in Dooragan National Park. Sitting on the top of the sheer cliffs is a fantastic place to gaze out at the sparkling blue waters and a great vantage point for whale watching and spotting dolphins ... You’re sure to see plenty of birdlife as honeyeaters come in to feed off the banksias and glossy black cockatoos nibble at the black she-oaks. If you're a native flower lover, this easy walk is a must in early spring. You’ll see boronia, flannel flower, everlasting daisy and wedding bush dotted amongst the bushes." For more information check out http://www.nationalparks.nsw.gov.au/things-to-do/Walking-tracks/Perpendicular-Point-walking-track.
(b) starting near Camden Head Road, the 'Flower Bowl' circuit, which is 2 km, lies among elevated sand dunes and offers superb displays of wildflowers in spring. At the end it reaches the Charles Hamey Lookout. The website eulogises: "you’ll be amazed at the breathtaking coastal views from Charles Hamey lookout. Sit on the cliff tops and admire magnificent scenery overlooking Gogleys Lagoon, with North Brother Mountain in Dooragan National Park providing a dramatic backdrop. Gaze across the golden sands of South Beach as it sweeps around to Diamond Head in Crowdy Bay National Park. Look out for whales and dolphins in the glistening blue waters below. You’ll also see plenty of birdlife, and you may even be lucky enough to see a peregrine falcon flying high above. Then shift your perspective and admire the delicate beauty of the wildflowers around you. In spring, the bush comes to life with bright wildflowers like boronia, flannel flower, everlasting daisy and wedding bush. Why not really immerse yourself in colour and continue walking around the 2 km Flower Bowl circuit." Check out http://www.nationalparks.nsw.gov.au/things-to-do/Lookouts/Charles-Hamey-lookout.
(c) there are short side walks down to Fishermans Bluff and Pebbly Beach.

The area, although small, is noted for its flora and fauna. Over 100 species of bird have been recorded in the park and there are small areas of rainforest. For more information check out http://www.nationalparks.nsw.gov.au/visit-a-park/parks/Kattang-Nature-Reserve.

* Prior to the arrival of Europeans the area around Kendall was home to the Bunga people.

* When Captain Cook sailed up the coast in 1770 he noted the three mountains in the area and named them, rather unimaginately, North Brother, Middle Brother and South Brother.

* The first European into the area was the explorer John Oxley who named Camden Haven Inlet in 1818. He also named Watson Taylor Lake after a British MP who had supported the pastoralist and landowner John Macarthur.

* In 1821 a penal settlement was established at Port Macquarie.

* By 1822 the first Europeans around the Camden Haven were soldiers guarding the southern entrance to Port Macquarie. Later convicts collected shells from First Nation middens for lime which they provided for the mortar used to make the buildings in Sydney.

* By 1827 the area had been surveyed as part of a grant to the Australian Agricultural Company.

* By 1856 cedar was being exported through Camden Haven.

* By 1876 the Laurie timber mill, owned by the Laurie brothers, had opened.

* The ketch Mary Laurie was built at Laurieton in 1888.

* In 1944 the American entertainer Bob Hope was forced to land in the Camden Haven Inlet when his seaplane experienced difficulties when returning from Guam.

* In 1958 Longworth sold all his timber interest to the Herons Creek Timber Mill.

* By the 1980s fishing and the dairy industries had declined and the district turned to retirement accommodation and tourism.

There is a useful local website. Check out http://visitcamdenhaven.com.au. 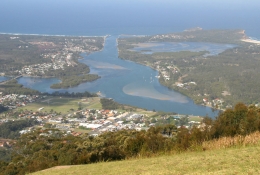 Laurieton lies between the North Brother Lookout and the Camden Haven River. 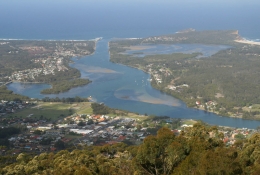 The view from North Brother Lookout over Camden Haven River and its mouth with the Pacific Ocean lying beyond. 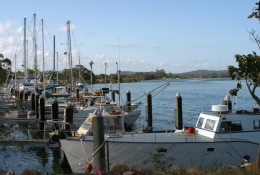