Like many of the smaller townships in the Blue Mountains, Lawson is essentially a shopping centre with some particularly beautiful bushwalks on both its northern and southern extremities. Its distinctive Blue Mountains Hotel alerts the traveller but it is only by leaving the Great Western Highway and travelling to the edges of the ridge that the beauty and wildness of the area is fully appreciated.

Amusingly Lawson was originally named 'Blue Mountain'. In 1879 it was renamed Lawson to honour William Lawson who in 1813, with William Charles Wentworth and Charles Blaxland, became the first European to cross the Blue Mountains.

The town's namesake, William Lawson (1774-1850), was a surveyor who arrived in the colony of New South Wales in 1800. By 1813 he had achieved considerable success and was living in a 40-room, colonial mansion at Prospect. The Australian Dictionary of Biography observes: "Lawson's knowledge of surveying made him a particularly valuable member of the expedition. His journal, with its accurate record of times and distances, enables the route to be precisely retraced."

Blue Mountains Hotel
The first Blue Mountain Hotel was built by Henry Wilson in 1845. The current hotel, located at 286 Great Western Highway was built between 1900 and 1910 by Sarah Wilson. It was probably modernised at the time to compete with the Grand Hotel. Amusingly there is a description of the hotel in 1930 but its them owners Tooths, the brewery company. "a 'tourist' hotel, two storeyed, lower part brick - upper wood - very good repair. Fairly big rambling building, appropriately newly painted and fully brightened up - no tiling. It has 12 bedrooms, a sitting room, a dining room and 2 parlors." There is a very detailed history of the hotel at http://www.midmountainshistory.org/hotel_history.html

Bushwalks in the Area
To the North
On the northern side of the Great Western Highway is North Lawson Park which has a pleasant bush walking trail to Fairy Falls, St Michael's Falls, Dante's Glen Falls and Frederica Falls. The main track is the Dante's Glen/Empire Pass Circuit Trail (3 km). It is of medium difficulty and includes waterfalls, birdlife and natural ponds.

To the South
To the south is the South Lawson Park and the  South Lawson Circular Walking Track which was constructed between 1878-1900. It is 2.5 km long and passes Adelina Falls, Junction Falls, Federal Falls and Cataract Falls. There are two car parks on Honour Avenue. Some of the trails are quite overgrown.

To the west of Lawson on the southern side of Bullaburra Genevieve Road goes to Red Gum Park where there is a short walk to Minnatonka Falls.

Aboriginal Rock Art
At the eastern edge of Lawson, Queens Road runs off the Great Western Highway heading north and a short distance from the highway there is the appropriately named Kangaroo Street where there is a rocky outcrop with a clearly carved kangaroo.

* On 21 May, 1813 Blaxland, Wentworth and Lawson, while crossing the Blue Mountains, became the first Europeans to pass through what would eventually become Lawson. They passed through the area and are thought to have camped at Bullaburra just west of Lawson on the night of 21 May.

* As early as 1817 the area was known as The Swamp or Christmas Swamp. By the 1830s this had changed to 24 Mile Hollow - the name indicating the distance from the Nepean River.

* By the 1820s Pembroke's Hut, one of the first buildings in the Blue Mountains, had been constructed. It was located where the Lawson Public School now stands.

* In 1879 to avoid confusion with the name of the region, the station and township were renamed Lawson.

* By the late 1890s Lawson had become a popular holiday destination in the mountains. It had two hotels and a number of guest houses, boarding houses and cottages to rent.

* Today it is a quiet, essentially suburban, village on the way up the mountains.

For a detailed history check out http://www.midmountainshistory.org/lawson.html 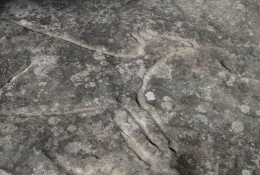 The kangaroo carving in the rocks on Kangaroo Street in Hazelbrook. 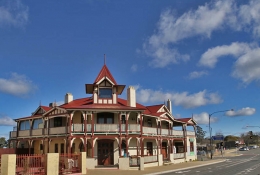 The distinctive Blue Mountains Hotel (1900) on the Great Western Highway. 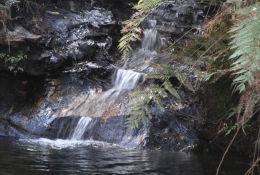 Small falls above the Adelina Falls on the Waterfall Loop Walk. 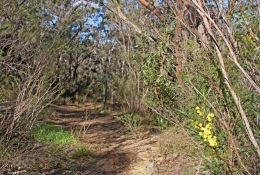 The bush track to the falls on the Waterfall Loop Walk.