Only a decade ago, Leeman was a sleepy little fishing village. Today, while still wonderfully isolated and peaceful, it is in the process of changing into a tourist and holiday destination. The appeal of the area is simple: it is quiet, there are no crowds, the fishing and surfing is exceptional, and there is something delightful about this out of the way place.

The coastal village of Leeman is located 261 km north of Perth via Cervantes and Jurien Bay.

Leeman was named after the Dutch upper steersman and navigator Abraham Leeman van Santwits who, in 1658, was shipwrecked on the Fishermen Islands to the south-west of the townsite. Leeman was a member of the crew of the Waeckende Boey (it means the Watchful Buoy) which was searching for survivors of the Vergulde Draeck which had disappeared two years earlier.

Fishing and Surfing
Today Leeman is a village which is ideal for fishermen and holiday makers. Fishing is a popular in the district and catches of dhufish and bald chin groper are particularly prized. The local council - Shire of Coorow - has detailed information on boat ramps and tides. Check out http://www.coorow.wa.gov.au/visitor-information-fishing-tides-and-boat-ramps.aspx. There was a time when the town described itself as  the 'Home of Western Australia's Dhufish'. The town has good beach and offshore fishing and the beaches are ideal for surfing, swimming, wind surfing and sailboarding.

Green Head
Located 13 km to the south is the small fishing village of Green Head. The building of sub-divisions and an 18 hole golf course in the 1980s and 1990s ensured that its 'get away from it all' atmosphere is slowly changing. Both Green Head and Leeman are homes to lobster fishing fleets which operate on the lobster grounds off the coast in the season. The industry developed in the 1950s and is important to the local economy.

Stockyard Gully National Park
Located 14 km east of Leeman (access is via the Coorow-Green Head Road), Stockyard Gully National Park covers 1500 ha, is accessible only by 4WD, and protects the unique flora, fauna, and cave system of the area. The park is in rough limestone bushland and low coastal heath. A stream in the gully drains the low sand plains and flows westward through the belt of coastal limestone and disappears into a series of subterranean caverns. Some of these caverns have collapsed to form a rocky gully bordered by steep cliffs. Vegetation is mainly light sand plain heath and banksia with some large Eucalyptus in the gullies. The most impressive attraction in the park is the large, 300 m long Stockyard Gully Cave. Check out http://www.australiascoralcoast.com/Listing/Stockyard_Gully_National_Park for more details

Beagle Islands and Sea Lions
Located 15 km north-west of Leeman, the Beagle Islands are predominantly limestone. They are recent geologically - dating from around 10,000 years ago. Their main claim is that they are home to the largest colony of sea lions in Western Australia with a community of between 150-250 in breeding season.

Wildflowers
The area is noted for its spectacular wildflower displays in spring (July-October). The easiest way is to check out the roads from the Brand Highway through to Green Head and Leeman. Those roads are known for the wildflower displays. There is a very useful guide to the local area at http://www.coorow.wa.gov.au/Assets/Documents/wildflowers_west.pdf. It includes such useful advice as: "The Coorow-Green Head Road has rich and diverse flora areas. This shrubby vegetation – called by the aboriginal people “Kwongan” is a dense mixture of numerous different plants. This wide road reserve traverses several kwongan types, from gravel through sand to peaty swamps. On the gravel, at the start of winter, look for the Staghorn Bush, with shiny flat grey stems and huge scarlet pea flowers. Closer to the coast there are patches of wandoo woodland. To the south are the imposing hilltops of Mt Peron and Mt Lesueur, from which superb views can be had. As winter gives way to spring, more and more plants burst into bloom – pink and yellow Verticordias, red One-sided Bottlebrush, cream Hakeas and soft grey Smokebush. Perhaps the most startling colour combination of all is provided by the Black Kangaroo paw. Its tall felted black stems hold up bright green flowers. The sight of a honeyeater probing for nectar deep within the flower is truly beautiful."

Who was Abraham Leeman?
Leeman was named after the Dutch upper steersman and navigator Abraham Leeman van Santwits who, in 1658, was shipwrecked on the Fishermen Islands to the southwest of the tiny settlement. Leeman was a member of the crew of the Waeckende Boey (the Watchful Buoy) which was searching the Western Australian coast looking for survivors of the Vergulde Draeck (Gilt Dragon) which had disappeared two years earlier.
Leeman was in charge of the landing parties which had scoured the shores for signs of survivors. One evening, with a storm brewing, he had been ordered by his captain to head towards the shore. Leeman and his crew were caught in the storm and found themselves unable to either land or return to the Waeckende Boey. They drifted north until they crashed into rocks and coral on Fisherman Island between the current sites of Leeman and Jurien. They managed to survive on seals and seabirds until their boat was repaired. Once the boat was made seaworthy they headed south searching for the Waeckende Boey. They spent a night on Lancelin Island but did not sight the vessel. Despairing of ever being found they started to sail north and landed on the Green Islets south of Cervantes. From here they sighted the vessel and duly lit fires which were acknowledged by a cannon blast from the ship. However the seas were still rough and, to the horror of Leeman and his men, the Waeckende Boey  proceeded to sail north leaving them marooned. Leeman refused to accept the impossibility of his situation and, after killing a number of seals and doing his best to collect adequate provisions, he sailed north eventually reaching Batavia. It is a journey of great courage.

* Prior to the arrival of Europeans the coast around Leeman was home to the Amangu Aboriginal people.

* Leeman was named after the Dutch upper steersman and navigator Abraham Leeman van Santwits who, in 1658, was shipwrecked on the Fishermen Islands to the south-west of the tiny settlement.

* In 1696 Willem de Vlamingh sailed up the coastline and offered a bleak assessment of its desolation.

* When he was shipwrecked at Gantheume Bay, Lieutenant George Grey walked along the coast back to Perth and traversed the area where Leeman and Green Head now stand.

* By the 1940s the rock lobster industry was being developed along the coast.

* In 1961 the Western Australian government decided to subdivide land.

* In 1962 the town of Snag Island, later to become Leeman, was gazetted.

* By 1971 the population had grown to a point where a Primary School was opened.

* Population increased in the 1980s when the town became a commuting zone for miners working for Western Titanium near Eneabba which is only 40 km to the east.

* In 1992 the Mary Queen of Peace Catholic Church was consecrated.

There is no dedicated Visitor Centre at Leeman. The Shire of Coorow Visitor Information, Main Street, Coorow, tel: (08) 9952 0100 has brochures and information. 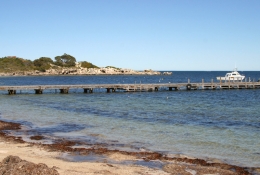 The jetty at Leeman. 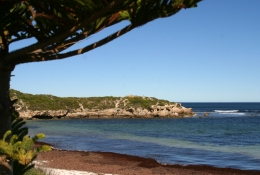 The view across the main beach towards Tea Tree Lookout. 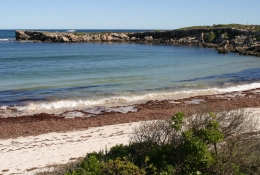 The lonely and very quiet beach at Leeman 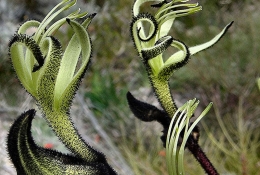 The black kangaroo paw, one of the distinctive wildflowers in the Leeman area.