Leigh Creek is a government-owned town on the edge of the desert (its annual rainfall is 205 mm). It is currently up for sale as its original purpose, to house the workers and their families who provided the labour force for the huge Leigh Creek open cut coal mine 22 km north of the town, ceased to exist when the mine was closed in 2015. At the time Leigh Creek was a modern mining town with a modern shopping centre, a series of neat modern roads and small, attractive plots of land on which standard modern houses had been built. Today it is a town without a purpose. It will be fascinating to see whether the South Australian government can find a new lessee or whether the town, like so many mining communities, simply disappears because its raison d'etre no longer exists.

In 1856 a settler named Harry Leigh moved into the area which was subsequently named after him.

Leigh Creek
It is still an inhabited town and, as such, is a fascinating opportunity to see what a purpose-built mining town, long before the days of fly in-fly out, was like. Built in the early 1980s it was designed as a community where the families of miners could live and enjoy a social life enhanced by the considerable pay the workers earned at the coal mine.

Leigh Creek Coal Mine
Visitors cannot enter the coalfields but it is possible, by travelling north from the town and driving east for 3.5 km on the main road to the coal mines, to reach a lookout point where a superb view of the open cut is available. At the lookout point there is an old walking dragline known as a Bucyrus Erie 9W. It began service at Leigh Creek in 1951. It has a 49 m boom and a 7 cubic metre bucket which was, at the time, the largest in Australia. There is also a huge tyre which achieved a world record of 289,215 km and 17,520 hours in service before it was 'retired'. Already the open cut mine is filling with water and it will soon be a vast dam.

Leigh Creek for Sale
In January, 2016 the ABC reported that the whole town, which is owned by the South Australian government, was up for sale. They noted: "It was built by the State Government in 1982 to support the state-owned electricity company. Since then the town has been leased to Alinta Energy, which was running the coal mine and two power stations at Port Augusta that are also set to close. Alinta Energy will hand back the town lease in 2018. There are about 350 houses used by state employees and mine workers, along with stores, a police station, a school and health facilities. The State Government is now open to all ideas." Check out http://www.abc.net.au/news/2016-01-22/sa-outback-town-leigh-creek-for-sale/7107922 for the full story.

The Future of Leigh Creek
There is an excellent article in The Guardian outlining some of the possible future scenarios for the region. Check out http://www.theguardian.com/environment/2016/mar/24/port-augusta-busting-a-gut-to-reinvent-itself-as-a-solar-city-when-coal-fired-power-is-switched-off?.

* Prior to the arrival of Europeans the area around Leigh Creek was inhabited by people from the Kuyani Aboriginal language group.

* In 1856 Harry Leigh moved into the area. The area was subsequently named after him.

* Coal was discovered in 1888 and small quantities were mined. Early mining was thwarted by mine shafts being filled with water which made mining nearly impossible.

* It wasn't until the 1943 that the coal fields began to be commercially exploited. The development was a result of South Australia's total dependence on New South Wales for its coal supply. Thomas Playford, the SA Premier at the time, argued that the state needed to be self-supporting in energy.

* In the mid-1970s  it was decided to move the original Leigh Creek township because the settlement, located 13 km north of the present site, was located on top of the coal seam.

* The new town site was chosen in 1977 and the first houses were occupied in 1980. The entire old town was auctioned off.

* In 1982 the South Australian government built the town to support the state-owned electricity industry.

* By 1986 100 million cubic metres of overburden had been removed from the mine site.

* In the summer of 2012-2013, dubbed The Angry Summer by the Climate Commission, the temperature in Leigh Creek reached a new recorded high of 46.3°C.

* Alinta is due to hand back the town to the state government in 2018.

Check out http://www.leighcreeksa.com.au/come-stay for details about the local area. 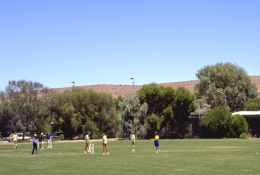 During a time of prosperity children play cricket on the Leigh Creek playing fields. 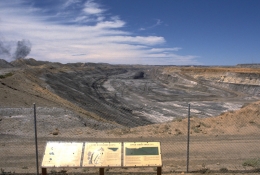 Leigh Creek open cut mine when it was operational. 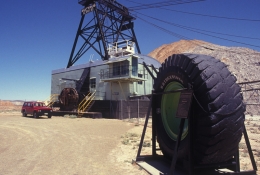 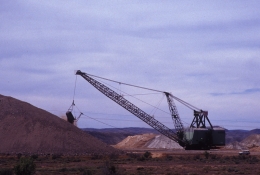 Moving overburden in the Leigh Creek open cut mine.