It was inevitable, given the lifestyle magnetism of Byron Bay, that the villages along the far North Coast of New South Wales, will aspire to the Byron Bay buzz. In recent times Lennox Head has evolved from a sleepy holiday destination into a chic, rather gentrified, holiday resort town known for its excellent restaurants and its modern accommodation on the beachfront.  It remains a charming, small townships with a large and beautiful headland (hence the name) to the south and a long, 'seven mile' beach which, in the words of the surfing community, is a place where 'the magical right-hand break' occurs. To discriminating surfers it is the 'Surf Capital of the Far North Coast'.

The first explorer into the area was Captain Henry Rous who seemed to be keen to name everything he saw after Charles Lennox, the Duke of Richmond. After naming the Richmond River at Ballina after the Duke he then named Lennox Head, again after the Duke.

Pat Morton Lookout
The Pat Morton Lookout on the headland at the southern end of Seven Mile Beach offers excellent views north across the township and Seven Mile Beach and south to Rocky Point, Boulder Beach and Skenners Head. There is a pleasant walking track with easy boardwalks which runs from town, along the oceanfront reserve and climbs the headland. Below the headland is 'The Point', a magnet for discriminating surfers. It is also common to see dolphins, and whales from May to October, from the headland. The headland is a result of lava flows and is part of the huge volcano which was over 80 km across and stretched from the Gold Coast down to Ballina and beyond. It was centred on Mount Warning near Murwillumbah.

Seven Mile Beach and Lennox Point
Seven Mile Beach at Lennox Head (patrolled in the summer months) is justifiably famous for its right hand break at Lennox Point. The excellent Australia's Surfing Coast website notes: "The Lennox Head point break is beautiful to look at but powerful, and to ride it you need to find space among dozens of red-hot local surfers, so it’s not the place for beginners. It breaks onto sand, but there are some round smooth rocks to be scrambled over. Meanwhile, the “Magic Miles” between Lennox Head and Ballina offers a mixture of beach breaks and reefs that work on a variety of wind and swell directions. The only time there aren’t any waves on the Magic Miles is when there’s no swell at all. Lennox Head was declared a National Surfing Reserve in February 2007, the third site in Australia to be recognised for its significance to recreational surfing. The largest National Surfing Reserve in Australia, it runs 7.2km from the Surf Club south to Flat Rock." For more details check out http://www.surfthecoast.com.au/LennoxHead.

Lake Ainsworth
Located at the northern end of Pacific Parade is Lake Ainsworth, a freshwater lake with a distinctive brown, tannin colour produced by tea trees which line the shore. With a large picnic area at the southern end it offers a calm freshwater retreat for families. It is ideal for sailing, swimming and picnics. The lake's brown colour is not a result of dirtiness but of the staining which occurs as a result of the tea trees which are common along the shoreline.

The Coastal Walk
There is a glorious 3.5 hour walk from the Pat Morton Lookout at Lennox Head to Ballina past rocky headlands and beautiful beaches.

Macadamia Castle
It is impossible to miss. The huge knight and the castle, located at 1699 Pacific Highway, Knockrow (2 minutes from the Lennox Head exit), herald a simple theme park for children and families. There are, of course, hot macadamias and gourmet food for sale but the real attractions are the adventure treehouse, the kangaroo feeding and rabbit petting, the mini golf, the train ride and the native birds and reptiles.  It is open from 8.00 am - 5.00 pm and entry is free. Check out http://www.macadamiacastle.com.au for details and prices. Tel: (02) 6687 8432.

* Prior to the arrival of Europeans the Bundjalung Aborigines had lived in the area for thousands of years (the middens on the coast are at least 2000 years old) and it was estimated there were at least 500 living in the area at the time of European settlement. They hunted the pademelons, wallabies, bandicoots and flying foxes in the hinterland. It is known that Seven Mile Beach was a common setting for tribal warfare between local Aborigines and those from further north.

* In 1770 Captain James Cook sailed up the coast. Joseph Banks, who was travelling with Cook, noted Bundjalung on Seven Mile Beach and was surprised that "not one was once observed to stop and look toward the ship; they pursued their way in all appearance entirely unmoved by the neighbourhood of so remarkable an object as a ship must necessarily be to people who have never seen one."

* The area around Lennox Head was low-lying coastal scrubland. It had little rainforest and held little interest for the cedar cutters who arrived in the district in the 1820s.

* By 1842 a number of former convicts had taken up land along North Creek.

* In the 1860s James Ainsworth (after whom Lake Ainsworth is named) took up land behind Seven Mile Beach. Ainsworth was a builder and contractor. He did however grow sugar cane.

* By 1865 John Skenner (after whom Skenners Head is named) had taken up land to the south of the present township.

* In 1922 Lennox Head was created as a private subdivision. The idea was to sell the blocks of land for weekender and holiday accommodation with Lake Ainsworth being the main attraction.

There are lots of good restaurants in the town but my personal recommendation, for both a coffee and an excellent meal, is Foam, 41 Pacific Parade, Lennox Head, tel: (02) 6687 7757 and http://www.foamlennox.com.

There is a useful website - check out http://lennoxheadnsw.com.au for information about accommodation and eating as well as fishing and surfing. 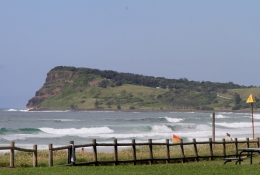 The view from Seven Mile Beach and the Surf Club across to Lennox Head. 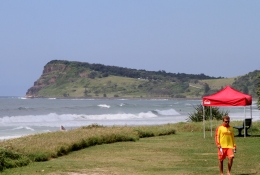 Lennox Head from the grounds of the Surf Club on Seven Mile Beach. 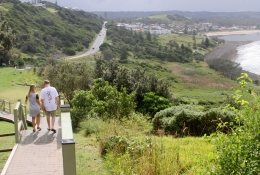 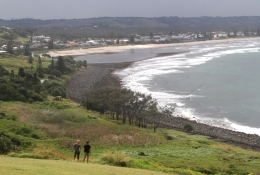 The view across the town from Lennox Head. 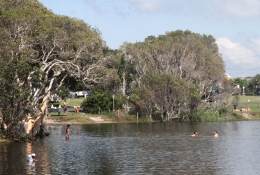 The popular picnic area at the edge of Lake Ainsworth 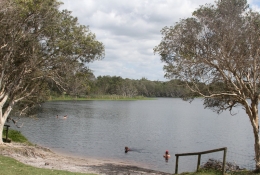 Swimming in the tannin-coloured waters of Lake Ainsworth