Leonora can get very hot. In the summer of 2012/2013, dubbed The Angry Summer by the Climate Commission, the temperature in Leonora reached a new recorded high of 49°C. In essence it is a fascinating desert service centre for the surrounding pastoral holdings and the mining and mineral exploration industries. Its appeal lies in its sense of being the true Australian outback and the nearby fascinating towns of Menzies and Gwalia.

Leonora is located 828 km north-east of Perth and 235 km north of Kalgoorlie.

John Forrest named a hill in the area, Mount Leonora, in 1869. He was honouring the wife of the Governor of Western Australia whose name was Lady Eleonora. When the town came into existence it was named after the hill.

Tower Street
The primary appeal of Leonora is the historic charm of Tower Street which has remained largely unchanged since the turn of the century. The shops, with their footpath verandas, and the turn-of-the-century hotels have a charm which has remained relatively unchanged by the booms and busts of the goldmining which drives the town's economy.

Gwalia Historical Precinct
See the separate entry on Gwalia. Gwalia is a ghost town only 1.5 km from Leonora.

* In April, 1869 the explorer John Forrest passed through the area looking for the lost explorer, Ludwig Leichhardt. He named Mount Leonora on 20 June, 1869.

* In 1895 a prospector named Booden found alluvial gold in a gully about 37 km north-west of the present site of Leonora.

* In 1896 Edward 'Doodah' Sullivan found gold 6 km from Leonora and in March that year he pegged the Johannesburg lease.

* In May, 1896 the Sons of Gwalia reef was discovered by prospectors named Carlson, White and Glendinning.

* On 1 May, 1898 Herbert Hoover, later to become President of the United States, was appointed General Manager of the Sons of Gwalia.

* In 1904 the Assistant Government Geologist, C.F.V. Jackson carried out a geological survey of the area.

* In 1903 a steam tramway linked Leonora and Gwalia. Two years later the tramway was linked to Menzies and the main railway line to Perth.

* By 1925 a number of pastoralists had moved into the area intending to raise sheep for their wool.

* In 1949, dealing with a shortage of labour, the Sons of Gwalia shipped 67 miners from Italy. Only 31 were still working at the mine a year later.

* On 13 December, 1963 it was announced that the Sons of Gwalia mine would close.

* When it closed on 27 December, 1963 Sons of Gwalia had produced over 2 million ounces of gold.

* The increasing price of gold in 1980 saw the mines reopen. The famous Tower Hill mine was reopened in 1983 and the Harbour Lights mine came into existence in 1985.

* In the summer of 2012/2013, dubbed The Angry Summer by the Climate Commission, the temperature in Leonora reached a new recorded high of 49°C.

The local council website is genuinely useful, particularly the Tourism and Leisure section. Check out http://www.leonora.wa.gov.au/ 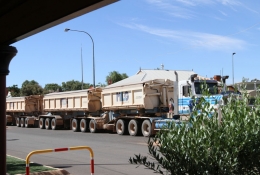 A road train trundles through the main street of Leonora. 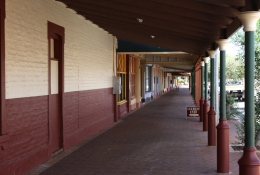 Tower Street is a superb example of a veranda street. 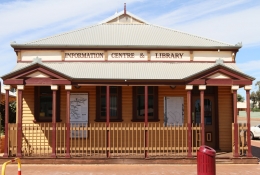 The Leonora Information Centre and Library 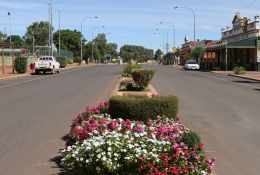 The wide Tower Street - the main street of Leonora.