Leura is the gem in the Blue Mountains crown. It is the most urbane and sophisticated of all the mountain villages. It has lots of excellent cafes, shops, restaurants, tea houses, guesthouses and hotels. It is a 21st century answer to the elegance which characterised so much of the Blue Mountains in the late nineteenth and early twentieth centuries. Not for nothing has it been described as a "well preserved  Edwardian village". It is easy to spend a day in Leura. You will eat well; enjoy many superb bushwalks beside waterfalls and overlooking the glorious Jamieson Valley; and you will luxuriate in the bracing mountain area. Add to all this an ambience created by tree-lined street and large houses with English and European-style gardens and a visit to Leura is a memorable experience.

Leura is located 985 metres above sea level and 99 km west of Sydney via the Great Western Highway.

No one is sure how Leura got its name. Some claim that there was a local Gundungurra word 'leura' which meant 'lava' but it is more likely that William Eyre, who subdivided the area in the 1880s, planned to name the settlement Lurline which was the name of his daughter. Somehow Lurline became Leura which became the official name of the town when the railway station was opened in 1891.

The Mall
Where do you begin? The Mall, rare in an Australian country town, is awash with cafes, tea houses, gift shops, shops selling antiques, a justifiably famous chocolate shop, restaurants, upmarket boutiques, furniture shops. This is a place where people who love shopping can easily spend an entire day. It is like nothing else in the Blue Mountains. Some of the cafes on the western side of the street have views across the valley to Katoomba - a lovely way to enjoy morning tea or lunch.

Hotel Alexandra
"Completed in 1903, the naming of this historic hotel at 62 Great Western Highway reflects the contemporary popularity of King Edward VII's wife, Queen Alexandra, in the years immediately following Queen Victoria's death. It was built on land offering fine views over the Leura Gap by a Mr Kensett who aspired to the construction of 'a first class residential hotel.'

"The spacious and gracious design was executed by local architect F.C. Goyder, whose father had bought the Great Western Hotel and settled in Katoomba after enrolling his son at the Katoomba College. Goyder's design was an adaptation of the Queen Anne style with a 26-metre front balcony offering excellent views, 22 bedrooms with electric service bells, three bathrooms offering hot water, a large dining room, smoking room, recreation room, drawing room, fine interior arches and an admirable staircase made of kauri pine. Its construction proved a boost to local tourism which had already benefited from the establishment of a railway station to service the Ritz Hotel in 1881." It is worth exploring as an interesting example of a hotel which remains from the golden days when holidaymakers flocked from Sydney in the summer months.

Fairmont Resort
The Fairmont Resort is a rare example of a modern hotel in an area where most of the hotels and guesthouses date from the late nineteenth and early twentieth century. Set in landscaped gardens and located very conveniently between the Leura Golf Course and the Jamieson Valley in recent times it has become a popular conference destination and an ideal place for a family holiday. It boasts four all-weather tennis courts, two squash courts, a gymnasium, games room, indoor swimming pool and a a number of good restaurants. Its location overlooking Jamieson Valley means that it also has pleasant bushwalks to Gladstone Lookout and Moya Point Lookout.

Leuralla and NSW Toy & Railway Museum
Leuralla, located at 36 Olympian Parade, was built in what is known as a Federation Free Classical style between 1910 and 1914 for Harry Andreas, a wealthy businessman known as both a yachtsman and big game fisherman. The 5 hectare gardens were established by Andreas with the help of Paul Sorenson who was responsible for the gardens at Everglades. The house is currently owned by Clive and Elizabeth Evatt and they are responsible for the Toy and Railway collection as well as the exhibition of memorabilia relating to H. V. Evatt who was Clive Evatt's uncle. Leuralla claims to have the largest collection of toys and model trains in the southern hemisphere. Certainly it has exhibitions as diverse as Popeye, Tintin, Alice in Wonderland.

The website notes of the gardens: "In the 1920s and '30s the garden was renowned for its displays of massed tulips and topiarized hedges, the rose trellised walkway to the picturesque "New England" style gabled and shingle-roofed barn, which was an extension in style of the first home ... Mr Andreas's young trees - Sequoia, Maples, Cedar, Linden, Copper Beech, Chestnut, Ash, and Oaks are now the mature graceful backdrop to Rhododendrum, Dogwood, Camelia and Azalea groves, walkways and seasonal plantings, massed displays of tulips, daffodils, bluebells, many of which have naturalized beneath the spread of sheltering trees."

Everglades Gardens
Everglades Gardens is a superb National Trust property with views across the Jamieson Valley to Mount Cloudmaker and Kanangra Walls. It is an outstanding mixture of native bushland and carefully designed gardens with displays of bluebells, daffodils, rhododendrons and azaleas spread over 5 hectares of steeply sloping ground. It was created in the 1930s by Danish-born horticulturalist and landscape designer Paul Sorenson who designed and built the gardens, sometimes with as many as 60 assistants, for wealthy Sydney businessman, Henri Van de Velde. Today the gardens are basically a series of terraces - the agapanthus terrace, wisteria terrace, lilac terrace, cherry terrace, rhododendron terrace; an exceptional Grotto Pool; and Everglades House which is Functionalist in form with a superb Art Deco interior. The gardens and house were acquired by the National Trust in 1962. The Gardens are open from 10.00 am - 5.00 pm during daylight saving. They shut an hour earlier in Autumn and Winter.  tel: (02) 4784 1938. For more information check out http://www.everglades.org.au/

Bushwalking Around Leura
There are literally dozens of walks in the Leura area and most are well covered in Bushwalking in the Katoomba Leura Area which is produced by the National Parks and Wildlife Service and provides a detailed map of the Leura area and descriptions of the walks. Blue Mountains City Tourism lists two walks it considers essential:

(1) Sublime Point Lookout - an easy twenty minute walk - it is regarded as one of the great viewing locations in the Blue Mountains. There is an excellent panorama of the Jamieson Valley and across to the Three Sisters at Katoomba.

(2) Leura Cascade to Bridal Veil Falls - a relatively easy one hour walk - which starts at the Leura Falls Picnic Area on Cliff Drive and heads down Leura Falls Creek and has excellent views of the small falls and the sheer cliffs. For those wanting something more challenging there is the difficult, 3 km Leura Cascades - Leura Forest Walk which goes down the side of the cliff into the Leura Forest in the Jamieson Valley passing through magnificent stands of eucalypts on the way.

* The Prince Henry Cliff Walk which connects the Scenic Railway at Katoomba with the Leura Area. It has numerous lookouts with sensational views and for much of its length it runs parallel to Cliff Drive. It was originally constructed by the Katoomba Shire Council in 1934 and with its stopping points at Bridal Veil Lookout and Bridal Veil View is a perfect introduction to the edge of the Jamieson Valley.

* Federal Pass Walking Track is for those hardy walkers who want to start on the track down into Jamieson Valley, pass by the Linda and Lila Falls and proceed around the valley floor under the Three Sisters and on to the Scenic Railway.

* Dardanelles Pass Track runs parallel to the Federal Pass Walking Track but closer to the cliffs. It was built by Council Ranger Jim McKay in 1915 to commemorate  Australian involvement in World War I and the Dardanelles campaign.

Cliff Drive
Cliff Drive starts at the bottom of The Mall and winds around the edges of the cliffs to Katoomba and beyond. It is the essential drive in the area and, if you have the time, it invites the visitor to pause over and over again and take in the panoramic and ever-changing vistas across the Jamieson valley. There are different angles on the Three Sisters, the Ruined Castle and Mount Solitary and a number of excellent picnic spots.

* On 24 May, 1813 Blaxland, Wentworth and Lawson, while crossing the Blue Mountains, became the first Europeans to pass through what would eventually become Leura. They passed through the area and are thought to have camped near where the Leura Railway Station now stands. They knew Aborigines were in the area because they heard a man chopping on 25 May.

* For a short period - 1885-87 - coal was mined at the Gladstone colliery which was located near the present site of the Leura golf course. The coal was sent to Sydney from a railway siding near the mine. The mine only yielded about 200 tons of coal.

* In 1891 the Leura village railway station was opened. The area was known as Lurline but the station was officially named Leura.

* 1901 land was sold at the Leura Estate south of the railway line.

* In 1932 Henri Van de Velde purchased the land on which he would build Everglades.

* Between the 1870s and 1930s Leura became a popular holiday destination for Sydneysiders particularly in the summer months when it was cool.

* By the 1970s it had become popular with Sydney's artistic community as a rural retreat. Perhaps the most famous resident at this time was Reg Livermore.

Check out http://www.leurabluemountainsguide.com which is a useful guide and suggests two books on the area for purchase. 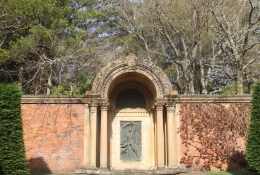 The glorious gardens at Everglades, now a National Trust property. 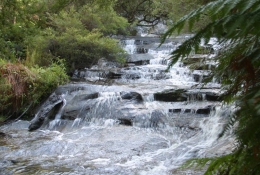 Leura Cascades on the walk to the Bridal Veil Falls. 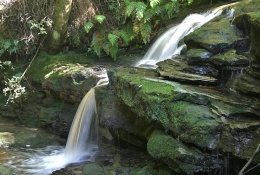 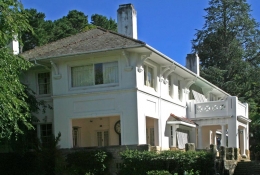 Leuralla, an art deco mansion now the home to the Toy and Railway Museum of NSW. 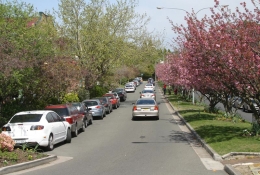 The Mall at Leura in spring. 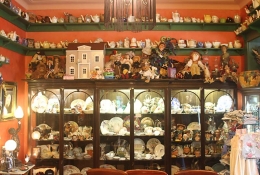 Endless teapots at the Treasured Teapot Museum, one of the many quaint shops in Leura. 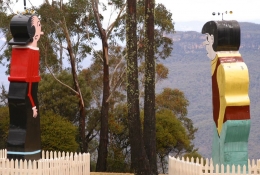 Comic strip characters Boofhead and Olive Oyl look across the Jamieson Valley from in front of Leuralla. 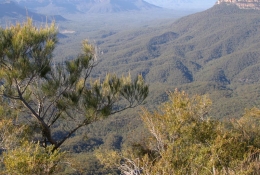 The view across the Jamieson Valley from Majestic Lookout.