Unique town privately owned by the Lions Club of Victoria.

Licola is unique. It is the only privately owned village in Victoria and, apart from some mining "towns" in Queensland and Western Australia, the only privately owned village in Australia. As well it is the only town in Victoria not connected to the state electricity grid. It is a sleepy little village with a general store, a camp ground and a couple of houses, which is located beside the Macalister River. The raison d'etre of the town is the Lions Wilderness Village, which provides simple accommodation and a wide range of activities  - climbing walls, flying fox, exercise equipment, canoeing, volley ball, and swimming in the river, archery, abseiling, climbing frames, solar heated swimming pool, mini golf - for young people and families. The village generates its own power, treats its own water (from the river) and disposes of its own waste. Licola is a popular starting point for bushwalking in the Snowy Mountains.

Licola is located 249 km east of Melbourne via the Princes Highway and Licola Road.

No one knows the meaning of the word "Licola". One amusing footnote is that John Lloyd, the creator of the television program, Q1, plays a game where words without meaning are given a new meaning. He stumbled upon Licola and insisted it meant "the girl in sixth form who has an entourage". Of course it doesn't mean that.

Licola Wilderness Village
The Licola Wilderness Village, totally owned by the Lions Clubs of Victoria and southern New South Wales, is proud that it is the only privately owned town in Victoria and the only town not on mains power. It provides its own power, water and sewerage. It was originally created to "provide programs for disadvantaged children and special needs groups." But over the 50 years since it was created it has expanded to include facilities for weddings (it has its own chapel) as well as to "provide outcomes based programs for schools, clubs and other organisations." It prides itself in its environmental credentials and its ability to develop self confidence and leadership skills in school students. The village can hold up to 250 people in 16 houses. Tel: (03) 5148 8791 or http://www.licola.org.au. There is an excellent map, with information about all the activities, at http://www.licola.org.au/index.php/info/explore-licola.

The Avon Wilderness
To the east of the town lies the 39,650 ha Avon Wilderness at the southern extremity of the Alpine National Park. There is no vehicle access to this isolated park. However there is a 45 km walking track (it is not clearly marked and therefore is only suitable for experienced bushwalkers) which passes Mount Hump, The Sentinel, and Millers Hut. For more information check out http://parkweb.vic.gov.au/explore/parks/avon-wilderness-park and https://theaustralianalps.wordpress.com/the-alps-partnership/the-parks/avon-wilderness. The latter offers downloadable smart phone apps.

Lake Tarli Karng
Lake Tarli Karng is located 23 km north of Licola and can be reached either by the 13 km walk from McFarlane Saddle Car Park or the 17 km walk from the Wellington River - this involves crossing the river 16 times. The lake, 850 m above sea level, was formed over 150 years ago by a huge rockslide. Tarli Karng has precipitous banks and, from some angles, is obscured by the debris from the old landslide. It is known as "The Hidden Lake" and is recognised as an Aboriginal sacred site. For more information there is a downloadable Alpine National Park Note - Our Mountain Heritage - walks around Howitt, Snowy Range and Tali Karng. Check out http://parkweb.vic.gov.au/explore/parks/alpine-national-park/things-to-do/walking-and-hiking.

Mount Howitt Walk
It will take about 5 hours return and is 14 km in total. The National Parks website explains: "The walk starts at the carpark on the Howitt Road, 81 km north of Licola via the Tamboritha Road. The first 5 km passes though pleasant Snow Gum woodlands and small, open snow grass plains. The memorial Vallejo Gantner Hut near Macalister Springs was built in 1970 as a refuge for bushwalkers. It has a unique copper clad inclined ‘A’ frame design. Beyond the hut the track follows a narrow ridge, with spectacular views into the headwaters of the Macalister River (west) and Wonnangatta River - Terrible Hollow (east). After a climb of 0.5 km the Australian Alps Walking Track is reached. Turn left, it is only a fairly short walk to the open rolling summit of Mt Howitt and Howitt West Peak. The view from here is one of the best in the Victorian Alps. Nearby is the jagged Cross Cut Saw, The Razor, The Viking and Mount Speculation, and in the distance Mount Buller to the west, Mount Buffalo to the north and Mount Feathertop to the north west." Check http://parkweb.vic.gov.au/explore/parks/alpine-national-park/things-to-do/walking-and-hiking.

Howitt and Snowy Plains
Located 82 km north-east of Licola (a two hour drive one way) are the Howitt Plains at 1580 metres above sea level. Two trails lead off from the car park: a 5 km track to the Macalister Springs and a 7 km trail to Mt Howitt (1742 m). Other features include the Snowy Plains airstrip, Dimmick Lookout, Bryces Gorge, Guy's Hut and Howitt's Hut. For more information there is a downloadable Alpine National Park Note - Our Mountain Heritage - around Heyfield, Licola and Dargo. Check out http://parkweb.vic.gov.au/__data/assets/pdf_file/0020/313166/Park-note-Alpine-NP-Heyfield-Licola-Dargo.pdf.

Alpine Walking Track
The Licola website (http://www.licola.org.au/index.php/groups/bush-walking) explains the problems associated with the Alpine Walking Track: "Bushwalkers wanting to walk in the Alpine National Park can access it from Licola, but it is necessary to get specific and detailed maps as all the walks take a number of hours (in some cases a number of days) and the tracks can be poorly defined. There is a 13 km walk to Mount Reynard and Kellys Hut. There are a number of walks from Guys Hut (which is on the Howitt Road) including one to the ruins of Wonnangatta Station (32km each way) and Bryce Gorge and Piemans falls (8km). These walks should only be attempted by experienced bushwalkers in summer time. in winter, the weather in the Snowy Mountains can change very rapidly." There are a large number of personal accounts of walking the Alpine Walking Track. For general information check out http://parkweb.vic.gov.au/explore/parks/alpine-national-park/things-to-do/walking-and-hiking.

* Prior to the arrival of Europeans the area was home to the GunaiKurnai Aboriginal people of Gippsland.

* By the 1840s the area had been explored by two Scotsmen, Malcolm MacFarlane and William Pearson.

* In 1847 Malcolm MacFarlane took out a license on Glenfallock Station.

* In 1949 Saxton's Timber Company acquired land beside the Macalister River.

* In 1965 the Lions Club of Victoria purchased the land and housing in the village. They converted the timber mill into a youth camp

* Serious floods in 2007 washed away Cheynes Bridge and isolated the town for two months.

* The town currently has a population of between 20 and 30.

There is a useful local website which includes the town and the local area. Check out http://www.visitheyfield.com.au/towns-things-to-do/licola. Also http://www.tourismwellington.com.au/licola/about-the-town is useful. 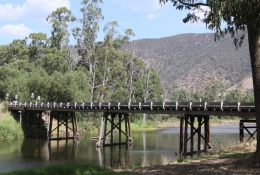 Bridge across the Macalister River at Licola 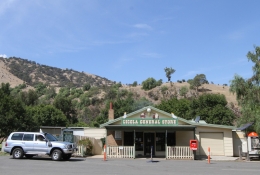 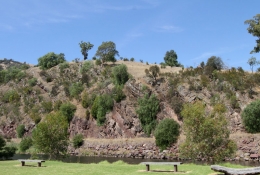 The park beside the Macalister River at Licola 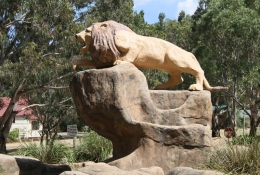 The lion statue at the entrance to the Licola Wilderness Village. 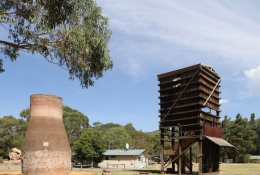 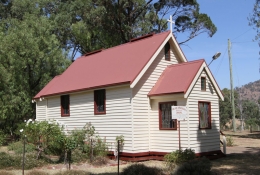