There is nowhere in Australia quite like Lightning Ridge. As a town it is the most bizarre, and compelling, combination of rural sophistication (the main street is sealed, curbed and guttered and has rows of regular shops - and there is a lot of money around) and the wildly eccentric - gasp at the house made from bottles and the rough cement "castle" of the Astronomer's Monument; surrounded by a moonscape of mullock heaps under which literally hundreds of obsessed miners search and dig for the black opals which have made the town famous.
Lightning Ridge is unlike the other major opal centres - Coober Pedy, Andamooka, White Cliffs - in the sense that it is accessible and consequently it attracts over 80,000 tourists, visitors and itinerants each year. This means that it has a a number of good quality motels, a rich array of souvenir and gift shops, some good restaurants, and a veneer of civilisation designed to meet the needs of visitors and fossickers who come for the winter months and spend their time digging for opals. In summer the temperature soars and the itinerants retreat to their cooler summer homes.
Lightning Ridge is known to be the only place in Australia, and one of the few places in the world, where the highly prized black opal is found. The black opal is prized not only because of its rarity but because it has carbon and iron oxide trace elements which produce a very dark stone with hints of blue, green and red.

Lightning Ridge is located 729 km north west of Sydney via Mudgee and Dubbo; 773 km via Newcastle and Muswellbrook; and 78 km north of Walgett. It is 64 km south of the Queensland border.

Initially the settlement was known as Nettleton's Hill because Charles Nettleton discovered the opals in the district in 1902. It was later renamed by the New South Wales Lands Department as Warrangulla but after World War I it was named Lightning Ridge. It is claimed that the name dates back to the 1870s when a farmer, his dog and 600 sheep were all killed by lightning. It is almost certainly an outback myth.

Opals As Souvenirs
One of the primary reasons for visiting Lightning Ridge is to buy wholesale opals and, if you have a little spare cash, to buy the rare and valuable black opals. The local tourism people advise that the serious purchaser should spend a couple of days visiting all the wholesalers and retailers in the town. Their argument is not about getting a bargain but about recognising that no two opals are the same and it may be that you will need a day to find the opal you want. The most sensible approach is to go to the Visitor Information Centre and ask for a comprehensive list of the places in town selling opals. The town's website has a section on "Buying Black Opals" (see http://lightningridgeinfo.com.au/buying-black-opal.html) but it is far from comprehensive. It is hard not to believe that the list has been written by each of the outlets involved. One insists it is "regarded by many as the best opal display in the ridge" and another as "one of the best collections of solid Lightning Ridge opal anywhere in Australia." A handy guide is the section in the Lightning Ridge and the Walgett Region brochure which explains opals and the terms used by the industry.

The Walk In Mine
The Walk-In Mine at Bald Hill has been operating since the 1960s and is recognised as the town's oldest tourist attraction. It is open from 9.00 am to 5.00 pm daily and is located on the Ridge above the town. It has underground mine tours which run throughout the day (no need to book), an opal jewellery showroom and the town's biggest mining hoist  tel: (02) 6829 0473 or check out http://www.walkinmine.com.au/. It also arranges Opal Field Tours. These need to be booked.

Big Opal
Located on 3 Mile Road this is an opportunity to explore an underground mine. There are daily tours and a showroom where visitors can buy set and unset opals, tel: (02) 6829 0247.

Chambers of the Black Hand
Located on 3 Mile Road is a strange vernacular exhibition of over 500 carvings and paintings. Created by local opal miner, Ron Canlin, it is a series of works carved out of the tunnels where he has been digging for opals. The website gives a good idea of the displays when it records: "The Egyptian chamber has humorous hieroglyphics and is a replica of an Egyptian tomb. Atlas holds the world while Adam supports the roof of the entrance to the working mine - another feature of the tour. The Last Supper which took six months to complete and the pondering Nostradamus, which took five hours to carve, are depicted in magnificent detail and is testimony to the razor sharp skill and patience of Ron." There are two full tours each day at 10.30 am and 3.00 pm. tel: (02) 6829 0221.Check out http://chambersoftheblackhand.com.au/ for more information.

Amigo's Castle
Started in 1985 by Italian-born miner Vittorio Stefanato, known as Amigo, this is really a folly. Based, very loosely, on Amigo's home town it is a building that will never be completed. It grows and grows and grows as Amigo adds rooms, turrets, towers and parapets.

Black Opal Tours
Black Opal Tours, which have been operating in Lightning Ridge since 1972, offer two-hour guided tours of the town and opal fields daily at 8.30 am and 12.30 pm, tel: (02) 6829 0368. The tour includes a visit to the Astronomer's Castle, Amigo's Castle and Fred Bodel's Opal Mine, all of which are not usually open to the public. Check out http://www.blackopaltours.com.au/ for more details.

Car Door Tours
If you want to guide yourself around Lightning Ridge there are a unique quartet of "car door tours" - the Blue Car Door, Green Car Door, Red Car Door and Yellow Car Door - which take in different aspects of the town. The Red Car Door Tour, for example, includes the more permanent and exotic buildings including the Ridge Castle and the very distinctive Astronomers Castle. You can learn more about each tour from the videos at http://lightningridgeinfo.com.au/car-door-tours.html.

Artesian Bore Spa Baths
The Lightning Ridge Bore Baths, which are the result of an artesian bore sunk by local graziers in the 1960s, provide a permanent supply of warm mineralised waters bubbling up from 900 m below the surface. The baths are located in Pandora Street. They are open 24 hours a day and it is a special experience to sit in the spa and gaze up at the vast outback skies.

Stanley "The Big Bird"
Located 10 km south of Lightning Ridge on the Castlereagh Highway and with a ton of scrap metal, three collected Volkswagen bodies and a pair of rusting satellite dishes sculpted into a colossal Emu standing at eighteen metres tall – artist John Murray from Lightning Ridge has certainly trumped the “Big Things” register with this jaw dropping, traffic stopping big bird sculpture “Stanley.” The "Big Bird" can reasonably lay claim to being the largest "Big Thing" in the country.
The story, as told in a plaque beside the “sculpture” is as follows:
“Stanley created by John Murray.
Stanley was conceptualized whilst John was driving on the Birdsville Track back in 2007. The idea was to create a statue of a big bird on the Birdsville Track – like a tribute to a pioneer. Although he was originally to be located at Birdsville, on the Birdsville track, the tyranny of distance, remoteness and bureaucracy led to Stanley being a no-show at Birdsville
As is often the case, the people and spirit of Lightning Ridge came to the rescue! Lightning Ridge is a wonderfully unique town known for its positive “can-do” community spirit – the place is built on mateship and having a go. Once it was decided the possibility was there to home Stanley in Lightning Ridge, a myriad of willing volunteers came forward and helped turn this possibility into a reality.
The welder, Tim Parsons, was visiting the Gallery and saw the conceptual painting of Stanley. He fell in love with the idea and uttered the words “Gee I’d love to be involved in that” – these words have been the catch-cry of everyone involved in he creation of “The Big Bird”.
All the workers, steel, VWs – pretty much everything involved in the venture – has been donated, there were simply no Government or Arts Grants that fitted the project.
In between two summer floods that halted activity, we carted VWs and steel, cut grinded and welded. In the heat of summer 2012, Stanley was close to completion. The final touches of priming and painting on rust, joining his head to his body and touchdown to his landing destination on the Castlereagh, took place in the late September amid a torrent of donated time, machinery and enthusiasm.
Stanley stands proudly on the site of The Ridge that Lightning Ridge was named after – built by the generosity and willing spirit that is the people of Lightning Ridge. Stanley faces in the direction of Birdsville – his spiritual home – and is proof that what is too hard for others, is easy for the Ridge.”

* Prior to the arrival of Europeans the area around Lightning Ridge was the home to the Kamilaroi Aboriginal people of northern New South Wales. The Kamilaroi believed that the opals were the result of a huge wheel of fire which fell to earth and sprayed the countryside with brilliant coloured stones.

* By the 1870s opals were being discovered in the area but the district was not recognised as an important opal field.

* In 1902 Charles Nettleton, a professional miner, sank a shaft and discovered the opals at Angledool Station. This was to become the site of Lightning Ridge. The Lands Department later gazetted it as Warrangulla and it was known as that until after World War I when it became Lightning Ridge.

* In 1907 the government surveyed the site for a town. It was located away from the area where shafts were being dug.

* By 1910 the settlement had a post office and the following year the telegraph arrived.

* In the 1960s local graziers sank the bore which is now the Artesian mineral baths.

There is a wonderful and comprehensive website, including a 40 minute video, check it out at http://lightningridgeinfo.com.au/. 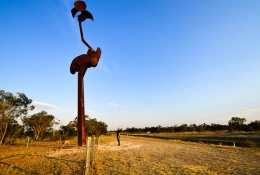 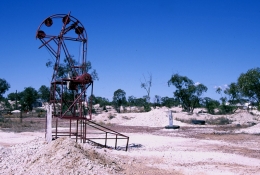 A simple mechanism for raising gravel (and hopefully opals) from a mine shaft. 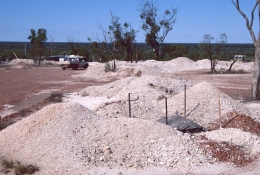 Mullock heaps as though moles have moved through the area. 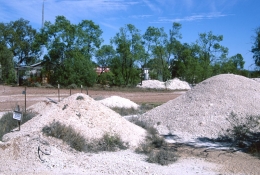 Expressions of optimism. Mine holes where men have dug trying to find opals. 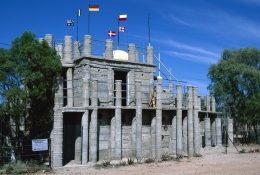 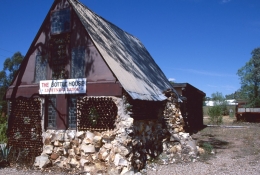 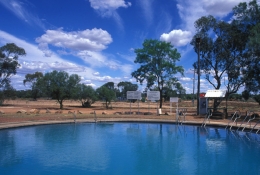 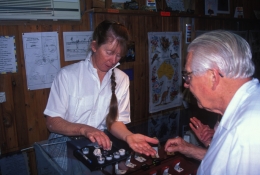 There is an active trade in the sale of opals found on the diggings. 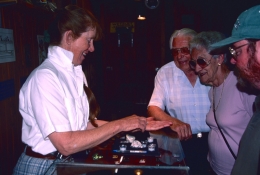 Visitors pour over opals in one of the town's many shops.