Small town with gardens and bushwalks.

Lilydale, which nestles under the slopes of Mount Arthur, is an attractive town which in recent times has attracted craftspeople and artists. The result is a quiet town with an artistic ambience. In recent times many of the local artists have painted the local telegraph poles with murals and, consequently, the town has become known as the "Home of the Painted Poles".

Lilydale is located 27 km north-east of Launceston on the north-western slopes of Mount Arthur (1187 m). It is 225 km north of Hobart.

For some years it was accepted as a fact that anti-German sentiments during World War I saw the town, which was originally known as Germantown, change to Lilydale. In fact the change occurred in 1887 when the name was changed from Upper Piper. There was a debate between Tankerville and Lilydale with the latter winning. The explanation for the name was that Christmas lilies were part of the town's impressive, European-style garden culture.

Lilydale Mural Painted Poles
The painted poles, now an integral part of the town's attractions, were painted by over 30 local volunteers assisting local artists Leanne Hodgetts, Jenny Scott, Teresa Whyman and Maggie Warren-Roberts. They were formally opened on 16 March, 2013 although the first poles were painted as long ago as 1998. There is a description and a series of photographs of each pole at http://lilydalearts.yolasite.com/poles.php.

Hollybank Forest Reserve
The Hollybank Forest Reserve is a 140 ha forest reserve which was first occupied  by timber cutters and mill workers in 1854. Although they cut out much of the valuable timber the reserve is now an arboretum with walking tracks. There are a number of tracks which range from short 15 minute strolls to more vigourous 40 minute walk through forests which represent some of Tasmania's production timbers. The ash trees in the arboretum which were originally planted to supply wood for tennis racquets and cricket bats is particularly beautiful in autumn.  There are barbecue and picnic facilities (even a bush cricket pitch) and an Information Panel which is located inside the reserve entrance. It is reached from a turnoff on Lilydale Road 7 km south of the town.

Mount Arthur Track
There is a 10 km (3 hour, medium difficulty) walk to the summit of Mount Arthur. The walk through myrtle forest to a high alpine plateau offers energetic bushwalkers far-reaching, panoramic and dramatic views of both the coast and the hinterland. For comprehensive details, and descriptions of both the three hour walk and a five hour walk, check out http://bushwalk.com/wiki/index.php/Arthur,_Mount_Track

Lilydale Falls Reserve
Lilydale Falls  is located 3 km out of Lilydale on the Scottsdale Road. The reserve provides an opportunity to explore the region's temperate rainforest, have a picnic, go bushwalking, inspect the falls which give the area its name, and admire the two oak trees which were planted on 12 May 1937 from acorns collected near Windsor Castle on England to commemorate the coronation of King George IV. The two small falls (the larger is no more than 10 m high), one above the other, are a 20-30 minute return walk from the car park through a glen with ferns and a eucalypt forest.

Lilydale Mural Painted Poles
The painted poles, now an integral part of the town's attractions, were painted by over 30 local volunteers assisting local artists Leanne Hodgetts, Jenny Scott, Teresa Whyman and Maggie Warren-Roberts. They were formally opened on 16 March, 2013 although the first poles were painted as long ago as 1998. There is a description and a series of photographs of each pole at http://lilydalearts.yolasite.com/poles.php

* Prior to the arrival of Europeans in the 1850s the area around Lilydale had been settled for thousands of years by the Tyerrernotepanner Aborigines.

* Timber cutters started clearing the Lilydale district in the late 1850s and by the 1860s a small number of settlers were living in the area.

* In the late 1870s a track was cut through the bush to the short-lived goldfields on the slopes of Mount Arthur.

* A railway line, a branch line from Launceston, was opened in 1889.

* Through the twentieth century the town grew slowly to meet the service needs of the surrounding orchards and farms. Today it is a small, quiet town 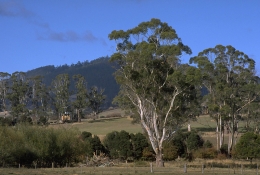 Mount Arthur behind Lilydale where there is a challenging 10 km walk. 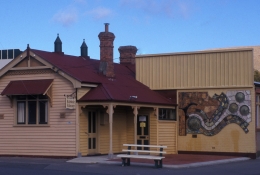 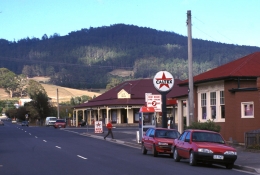