Lismore is a small service town in an agricultural-pastoral area which is notable for its wool, lamb, canola and cereal crops. The district is characterised by lakes - Lake Corangamite lies to the south - and ancient volcanoes including Mount Widderin and Mount Elephant. Visitors are attracted by bushwalking, exploring the volcanic formations and swimming, boating, fishing and camping in and around the lakes.

Lismore is located 166 km west of Melbourne on the Hamilton Highway and 41 km north-east of Camperdown.

When the area was first settled by Europeans the village was known as Brown's Water Holes. When it was surveyed in 1852 it was renamed Lismore. It is thought it was named after Lismore in County Waterford, Ireland.

Lismore Discovery Trail
This is a pleasant sequence of three walks around town. The walks are (a) the Recreational Route - 2 km, 30 minute (b) Township Route (2.5 km, 50 minutes) and (c) Cemetery Route - 1.1 km, 15 minutes. There are a number of plaques indicating places of particular interest. Check out http://lismore.vic.au/discovery-trail.html for more details about the trail.
Of interest are:

Avenue of Honour
The plaque explains: "The Lismore Avenue of Honour was planted in 1918 as a living memorial to those from Lismore and district who served in the First World War. Each tree was named for a soldier or Red Cross worker and planted by family or community members who knew them. The trees lined William Street and, for the soldiers from the Gnarpurt settlement, Heriot Street. The trees were fenced against wandering cattle. The planting was of a range of eucalypts and included a number of rather unusual and beautiful flowering varieties. Of the original 190 trees you can still see a number of old trees remaining: these include the lemon-scented gums with solid white trunks planted on corners to make them more visible to vehicles at night, the original and replanted ironbarks with grey leaves and rough black bark, and on the east end of William Street some of the original sugar gums still tower overhead."

Presbyterian Bluestone Church
Located on the Hamilton Highway at the western end of town, the Lismore Presbyterian Church opened in 1864. The plaque outside explains: "The church's solid structure and early existence reflects the preponderance of lowland Scots among the early station owners. Robertson at 'Struan' (Gnarpurt), Currie at Larra, Wilson at Gala, Logan at Elephant Run, and Mack at Berrybank, along with many of the early townspeople were from the same general area of lowland Scotland and were strong Presbyterians.
"Hamilton & Co., Mortlake were the original architects and G. H. Botterill of Skipton builder. The stone was cut from a quarry in the south-east portion of the township. Described as being of bluestone surmounted by a belfry of cut stone and lighted by six Gothic windows with leadlight. The entrance is by a neat porch, the roof opened and lined.
"The foundation stone was laid on June 8, 1864 by Henrietta Lang, eldest child of J. L. Currie of “Larra”; the position of the original stone is unknown. In 1934 a stone similarly inscribed was counter-sunk into the wall near the entrance. Enlargements and repairs have taken place over the years; the Apse and Vestry added in 1951. A picket fence replaced the rail fence in 1907 with a bluestone wall erected in 1947; a memorial to Mary Helen Gibson and Grace Gibson."

Gnarpurt Chapel, Woolshed and Soldier Settlement Memorial
Located on Lower Darlington Road (head south on Gnarpurt Road for 8 km and turn into Lower Darlington Road) is a simple Gothic Revival bluestone chapel built by Scotsman Adam Swanston Robertson in 1867 for the worship of his employees. The church was based on Robertson's memories of Scottish country churches and features a stone Celtic rose carved in the stonework above the door. Prior to its construction lay preacher Robertson conducted services in a specially constructed chapel room with high vaulted ceilings and massive beams in his homestead (which is still standing). The chapel is reputed to be the smallest church in Victoria. It is only 8 metres by 4.5 metres. For more information check out https://vhd.heritagecouncil.vic.gov.au/places/67831/download-report.
Some 300 metres further along Lower Darlington Road is a large woolshed which once had 20 stands and processed 15,000 merino sheep. There is also a shearer's quarters. It was built by Alexander Hamilton. Gnarpurt was later subdivided for soldier settlement. There is a monument to the Soldier Settlement on the corner of Gnarpurt and Lower Darlington Roads which records the names of the setters and notes: "This Memorial Celebrates The Returned Servicemen And Their Families Who Settled On The Gnarpurt Estate Following World War II. Their Determination, Hard Work And Fellowship Developed These Farms And Contributed To The Prosperity Of The District."

Lake Tooliorook
Lake Tooliorook is located on the Camperdown Road 9 km south-west of Lismore. It is part of an extended lake system which includes over 50 lakes and it feeds into the large Lake Corangamite. It is widely accepted that the lake formed sometime between 20,000 and 4,000 years ago when the volcanic Mount Elephant erupted. The lake was named after a local Aboriginal word but no one is certain of its meaning. It may be the name of the lake or it may mean "brackish lake" or 'water birds' or "swan". Today the lake is used for fishing, water sports and birdwatching. There is an extensive and detailed history of the lake which can be accessed at https://sites.google.com/site/laketooliorookanditssurrounds.

Mt Widderin Caves sometimes called Skipton Caves
The Mt Widderin Caves are located on Mt Widderin station 29 km north of Lismore, just off the Lismore-Skipton Road. They are the largest volcanic caves (sometimes referred to as 'lava tubes') in Victoria. The main cave is 58 m long, 19 m wide and 9 m high. There is a  200-metre walk which leads to a subterranean lake. These caves were formed when lava cools leaving an outer crust which forms a tunnel. The lava continues to flow through this tube. Thus they are also known as lava tubes (like the ones at Undara in far North Queensland) and are reputedly the largest lava tubes in Victoria. They are no longer open to the public. Check out https://www.mindat.org/loc-205.html  and http://www.skiptonaustralia.org/292551455 for more information.

* Prior to the arrival of Europeans the area was home to the Gulidjan Aboriginal people.

* European settlement began when a pastoralist named John Brown broke an axle near a small chain of ponds in 1840. He decided to stay. The area was initially known as Brown's Water Hole.

* In 1852 a town was surveyed. Shortly afterwards the White Swan Hotel was built.

* In 1865 a Presbyterian Church was opened and dedicated.

* The White Swan Hotel was probably built in 1879.

* Between 1905-1908 sections of land surrounding the village were opened up to closer settlement.

* In 1912 the town got both a Methodist and an Anglican church.

* A railway line from Geelong to Ararat passed through the town in 1913. It serviced a livestock saleyard.

* The Lismore and District Hospital opened in 1965.

There is a dedicated local website. Check out http://lismore.vic.au/tourism.html. 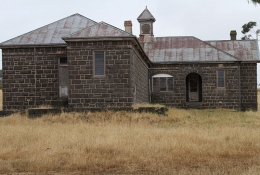 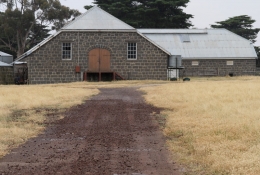