Village established by Prussian immigrants in the Adelaide Hills

Lobethal is a pleasant village in the Adelaide Hills. It was established in the early 1850s by Prussian Lutheran migrants. Today it is surrounded by orchards of apples and pears; vineyards and cellar doors; and is known for its artistic community and its pleasant bushland walks.

Lobethal is located 35 km east of Adelaide and 410 metres above sea level.

On the day of the division of the land, according to Lutheran pastor, Reverend I. Ey's account, "it received the name Lobe thal, taken from the II Book of Chronicles, chapter 20, verse 26, which, according to Luther's translation, means 'Valley of praise'."

Lutheran Church Complex and Zum Weinberg Christi
The Lobethal Lutheran complex is located in the town's main street. It includes:
* the first Lutheran Seminary in Australia (a small pug wall construction) which was built in 1842,
* the oldest original Lutheran Church which was built between 1843-1845 with bricks which were fired in a nearby kiln and carried by women in bags and aprons on their way to Sunday worship. "During the week, after work, the men of the town built the church. It is likely that local brewer, FW Kleinschmidt, was head builder. Finished and dedicated in 1845, Zum Weinberg Christi, or St John's, was the first permanent Lutheran Church built in Australia."
* the Lobethal Archives and Historical Museum which is open on weekends and contains information about the lives of the early German settlers. Located within the grounds are a number of interesting and historic graves. For details of opening times and tours contact (08) 8389 6996. For greater detail check out http://lobethal.sa.au/history/european-history.

Lobethal Sculpture
Located at Mill Square, at the intersection of Woodside Road, Main Street and Lobethal Road, the sculpture, titled Spring, Summer, Fall, Winter ... is by Korean sculptor, Hwang Seung-Woo, is made from marble from Paris Creek in South Australia, and won the People's Choice Award in the 2012 Adelaide Hills International Sculpture Symposium. For more information check out http://hillssculpturetrail.com.au/spring-summer-fall-winter-and which notes: "Hwang made an important connection with the people of the Lobethal community and was mindful of their history as the home of the Onkaparinga Woollen Mills. For this piece Hwang chose to portray blankets and textiles."

Onkaparinga Woollen Mill Museum
Located in Building 26 in the Old Mill Complex (and clearly signposted) at the junction of Woodside Road, Adelaide Road and the Main Street in Lobethal, the museum comprises a selection of Mill machinery and associated pieces including paperwork and samples of fabric, some dating back over one hundred years.  The collection became the Onkaparinga Woollen Mill Museum and opened to the public during History Week 2009. The Woollen Mill had closed down in 1993. There are tours which are conducted by people who worked at the mill. The museum is open by contacting Brian Brock on (08) 8389 6725 or check out http://lobethal.sa.au/visitor-info/onkaparinga-woollen-mill-museum.

The German History of Lobethal
In 1838, in an attempt to persuade people to move to South Australia, George Fife Angas went to London as a director of the South Australian Company to do a little "colonisation" promotion. During the trip Angas met Pastor August Ludwig Christian Kavel who was trying to organise for Lutherans to emigrate … anywhere out of Prussia. Some had already gone to the USA and Canada. The problem faced by Prussian Lutherans was horrific. From 1807, the emperor, Kaiser Friedrich Wilhelm III, decided he was going to unite his church, the Reformed (Calvinist) church, with the Protestant Lutherans.
The Lutherans weren’t happy about the amalgamation. The Kaiser named himself Bishop of the new Union Church. He appointed himself the head of the new church.
For Lutherans, separation of church and state was fundamental and they refused to recognise the authority of the Kaiser. He then proceeded to persecute them – he banned the word Lutheran; confiscated church property and fined congregations. By the 1830s Lutherans were being jailed for their faith; even deputations sent to speak with the Kaiser were imprisoned.
Angas was moved by the plight of the Lutherans and not only persuaded Kavel that South Australia was a suitable place for emigration but also financially assisted them with a generous £8,000.
The first German settlers arrived on 25 November, 1838 at Port Misery. They travelled into the countryside and established distinctly German/Prussian villages at Klemzig, Glen Osmond, Lobethal and, most famously, Hahndorf.
In 1841 the Lutherans who settled in Lobethal arrived in the colony. In 1880 the Reverend I. Ey wrote that "The bulk of the persecuted Lutherans of Lobethal, with their beloved pastor (G.D. Fritsche) came out in the ship Skjold which arrived in Port Adelaide on 28 October 1841, after an eighteen weeks' trip, during which no fewer than forty-four deaths occurred. They were temporarily taken care of and welcomed by the somewhat earlier pioneers of Klemzig and Hahndorf, and some went up to the Tanunda district."
Eighteen families in this group subsequently purchased 168 acres on the present site of Lobethal and divided it up amongst themselves.
On the day of the division of the land, according to Ey's account 'it received the name Lobethal, taken from the II Book of Chronicles, chapter 20, verse 26, which, according to Luther's translation, means “Valley of praise”.
The town was originally laid out in a careful democratic way (known as the Hufendorf settlement pattern) so the houses run along the road and the land attached to the houses stretches behind them in narrow strips. The people worked hard and, over time, Lobethal became an important centre in the agriculturally rich valleys behind the Adelaide Hills.

* In 1838 George Fife Angas went to London as a director of the South Australian Company to try and promote colonisation.

* Most of the Prussian Lutherans who settled Lobethal travelled to South Australia in the ship Skjold which arrived in Port Adelaide on 28 October 1841.

* In 1842 eighteen Lutheran families purchased 168 acres on the present site of Lobethal and divided it up amongst themselves.

* In 1845 a Lutheran seminary was established in the town.

* By 1870 the town had the Lobethal Woollen Factory which eventually became the Onkaparinga Woollen Company.

* By the 1880s gold was being mined near the town. In total 11.2 kg were successfully mined from the Lobethal goldfield.

* The town was struck by intense anti-German feelings during World War I and the name was changed to Tweedvale by a 1917 Act of Parliament.

* In 1929 the woollen mill was renamed the Onkaparinga Woollen Company.

* The Onkaparinga Woollen Company closed down in 1989.

* Today this historic town is the centre of orchards which grow stone fruits, grapes, apples and pears as well as market gardens and dairy and beef farms.

There is a useful local website. Check out http://lobethal.sa.au. 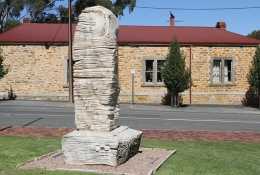 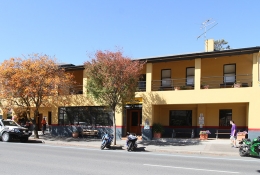 The Lobethal Hotel in the main street 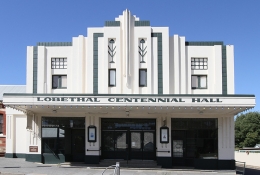 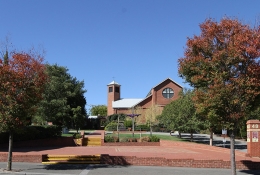 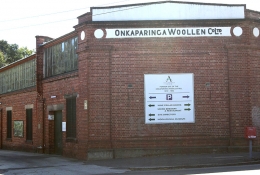 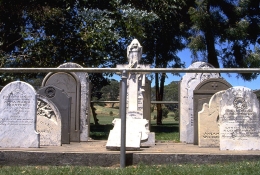 The historic graves at the Lutheran Church 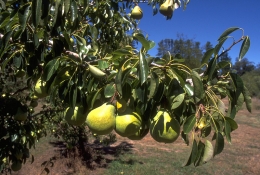 Pears in the orchards around Lobethal 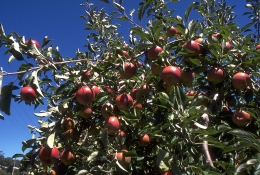 Apples in the orchards near Lobethal