Longford is an impressive classified historic town with elegant buildings, a particularly impressive and historic church and a gracious park in the centre of town. But, for all this historic appeal, this is not why travellers come to the town. The real appeal lies out of town. It is the story of the Archer family - one of Tasmania's small number of upper class families - and their remarkable estates at Woolmers and Brickendon. Here, just south of Launceston, is a reminder that Van Diemen's Land in the 1830s was rapidly taking on the trappings of aristocratic England with more than a little help from free convict labour.

Longford is located 24 km south of Launceston via the Midland Highway, 187 km north of Hobart and 175 m above sea level.

Exploring Longford Historic Precinct and Environs
Longford has an impressive collection of historic buildings. There is an excellent brochure: The Path of History: A Walk Through Longford's Historic Precinct which lists a total of 34 buildings and places of historic interest in the district. It can be downloaded at http://www.longfordtasmania.com/assets/longford-walking-brochure.pdf. Of particular interest are:

1-6 - Wellington Street
The buildings of historic interest on Wellington Street run up from the Village Green and include The Library (1858) which was originally the Market Square Inn, renamed Tattersalls Hotel; 59 Wellington Street (1887); the Longford Town Hall which was originally built as the Assembly Rooms by Elizabeth Noake, the owner of the Queens Arms; the Queens Arms Hotel (1835) which was known as the Kings Arms until Queen Victoria came to the throne; the Iron Horse Trough and Lamp Standard which was installed in 1897 to celebrate Queen Victoria's Diamond Jubilee; and Brown's Big Store which was built in 1889.

7 - Goodlands
Located on Wellington Street this elegant home was built c1835 on a 60 acre grant by William Mason, who had arrived in Van Diemen's Land in 1818 at the age of 18 years. He married Elizabeth Heazlewood and the couple had 11 children (2 died as babies). William was prominent in the Primitive and later Wesleyan churches. He was elected to the first Longford Municipal Council in 1862. The Examiner reports in 1877 that the Estate of "Goodlands" has been sold to Mr Thomas Arthur (son of Charles Arthur Esq) for the sum of ₤3,000.

17 - Heritage Corner
This building dominates the centre of Longford. It was built sometime in the 1830s and known variously as the London Hotel and the Plough Inn. It is located on the sharp corner between Wellington and Marlborough Streets.

20 - Christ Church
Christ Church is a Midlands freestone building which dates from 1839. It cost nearly £7,000. The foundation stone was laid by Lieutenant Governor Franklin in 1839. The church clock and bell were both gifts from King George IV; its stained glass window was designed by William Archer of Cheshunt; the church yard was laid out with a plan to have every tree named in The Bible planted in the grounds; and the church's graveyard includes members of prominent local families including the Archers (they have a vault) and the Reibeys as well as Ann Edmunds, mother of the first English child born in Van Diemen's Land.

32 - Racecourse Hotel
The Racecourse Hotel in Wellington Street is a two storey Georgian inn. It was originally built to become Longford's railway station. At various times it has been a private hospital, an old people's home, a B&B and a pub. The pub achieved considerable notoriety when a woman, having stolen and swallowed two gold sovereigns from some local farmhands, was murdered. The murderers were subsequently hanged at Gibbet Hill outside Perth.

Longford Racing History
There was a time when Longford was known as an important location for motor racing. The first race meeting in the town was held in 1953 and between 1959-1965 the Australian Grand Prix was held on a 7 km lap which passed under a railway line viaduct, crossed the South Esk River, passed over the railway line using a level crossing and traversed the South Esk again via the Long Bridge.
Over the years the race attracted some of the finest Grand Prix drivers of the time including Jack Brabham, Graham Hill, Jackie Stewart, Bruce McLaren, Leo Geoghegan, Bob Jane and Allan Moffat. Little is now left of the track but the local pub has a large collection of memorabilia including a Formula 1 racing car in a large glass case. Check out the Longford Country Club Hotel, 19 Wellington Street, tel: (03) 6391 2769 and https://www.facebook.com/Country-Club-Hotel-Longford-TAS-107000987601490.

"Brickendon was a place of Assignment, where convicts were put under the control of a private land owner as a free labour force and were provided with food, shelter and reformation through religious instruction. Assignment was the most common experience for a convict – some 80 per cent of all convict labour to Tasmania was assigned to work during the 1820-40’s. It provided the labour to develop productive farms (wool exports and food production) vital for the growth of the new colony.

"The beautiful hedgerows, rolling landscape and original convict buildings of the farm village and magnificent estate gardens and homestead are a testament to the innovative thinking and hard work of William Archer, his convict work force and the Archer descendants. Still a working farm, Brickendon is an extraordinary example of colonial farming and enterprise through to the current day."

Today visitors can experience the farm as it was when the convicts worked there. The Farm Village, built by convict labour in the 1820s, includes a blacksmith's shop, cook house, barns and granaries, the original homestead cottage and a Gothic chapel. It is open Tuesday - Sunday from 9.30 am - 5.00 pm. For more information http://brickendon.com.au/ or tel: (03) 6391 1251.

34 - Woolmers Estate
One of the highlights of any visit to Longford should be an extended visit to the remarkable Woolmers Estate. It is significant because it offers a unique opportunity to see how the wealthy landowners lived between 1817-1994. It was during this time that six generations of the Archer family lived in the house. These were not poor or lowly people. The first Archer to arrive in Van Diemen's Land was Thomas who immediately took up the Government post of Deputy Commissariat of the Stores at Port Dalrymple (George Town). In 1817 Governor Lachlan Macquarie granted Thomas 800 acres on the Macquarie River. The property, on the fertile Norfolk Plains, was named Woolmers after a property in Hertford, England. It was here that he built a colonial style bungalow (it still stands and is the family home) and committed himself to developing the property. By the time of his death in 1850 Woolmers had grown to 12,271 acres and Thomas owned property at Fairfield (12,061 acres) and Cheshunt (9,940 acres). He had become an influential man of property.

Thomas was so successful that his father and his brothers, Willliam and Joseph, followed him and over the years the Archers established properties at Panshanger, Brickendon, Northbury, Fairfield, Cheshunt, Woodside, Palmerston and Saundridge.

The Archers remained at Woolmers until 1994 when Thomas William Archer VI, who was eccentric and never married, died without an heir. He left the entire estate to the Archer Historical Foundation which has, over the years, maintained the property, opened it to the public, established the National Rose Garden, and where attractive outbuildings have been opened to the public as B&B accommodation.

Woolmers is a unique opportunity to see into the life of a near-aristocratic colonial family. The house, which is elegant without ever being ostentatious, is beautifully preserved and the grounds are extensive. The Archers used convict labour extensively and the wool and apple packing sheds, the Coach House, Farm Stables, Blacksmith's smithy and Settlers Cottages were all built by the convicts who lived on the property. I have stayed in one of the cottages built in the 1840s and can strongly recommend it as a unique colonial-era experience.

Woodstock Lagoon Wildlife Sanctuary
Located 8 km west of Longford via Bishopbourne Road, the Woodstock Lagoon Wildlife Sanctuary is a 160 ha wetland which has been fenced from stock and new trees planted. It was reserved in 1967 and Bill and Jamie Cox, who own the land, have ensured that it has remained an important nesting and breeding sanctuary for large numbers of waterfowl.

* Prior to the arrival of Europeans the area around Longford was occupied by the Tyerrernotepanner Aborigines.

* The district around Longford was first explored by Europeans when Jacob Mountgarrett and Ensign Hugh Piper passed through in 1806.

* In 1807 Lieutenant Laycock, travelling from the north to the south of Van Diemen's Land, camped near the present townsite.

* The district was first settled in 1807 when a large number of free land holding farmers were moved to Van Diemen's Land from Norfolk Island. At this time the district became known as Norfolk Plains.

* The arrival of Thomas Archer in the mid-1820s added a certain elegance to the area. With his three brothers, and using convict labour, they built 'Woolmers', 'Panshanger', 'Brickendon' and 'Northbury'.

* The town grew up around the Longford Hotel which was built in 1827.

* The early settlement was known as Latour but it was changed to Longford in 1833.

The most valuable website is http://www.longfordtasmania.com/assets/longford-walking-brochure.pdf which is a downloadable map of the main historic attractions in the town. 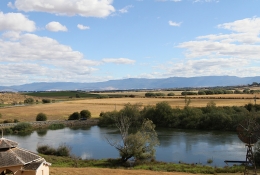 The view from Woolmers looking across the Macquarie River to the Great Western Tiers. 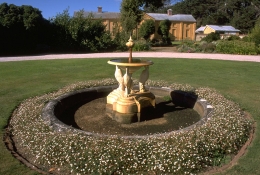 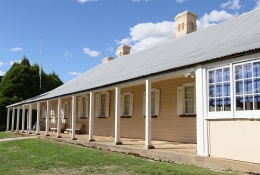 The veranda at Woolmers where Thomas William Archer VI spent his final days. 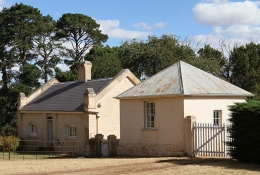 The cottages on Woolmers - now available as B&B accommodation. 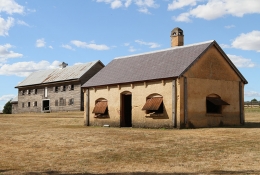 The outbuildings at Woolmers Estate 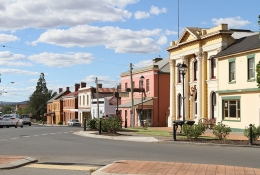 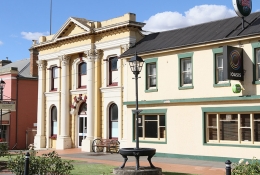 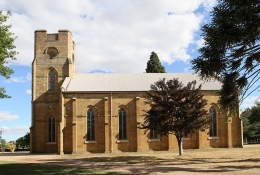 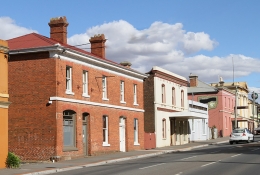 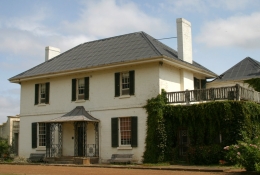 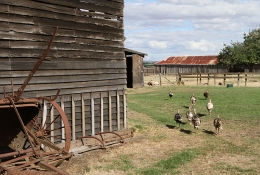 Brickendon still has many elements of a working farm. 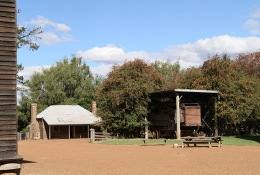 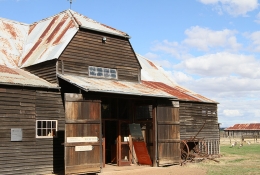