Longreach is the largest town in central Queensland and, as such, is an important rural service centre for one of the state's most prosperous wool and beef areas. Located on the Tropic of Capricorn it services an ever-growing tourism industry which has been driven by the success of the Australian Stockman's Hall of Fame and the Qantas Founders Outback Museum.

Longreach is located 1177 km north-west of Brisbane via Toowoomba and Roma. It is 686 km west of Rockhampton and 191 metres above sea level.

Longreach was named as a description of the 'long reach' of the Thomson River. The river flows quite close to the town.

Australian Stockman's Hall of Fame and Outback Heritage Centre
In recent times the $12.5 million 'Australian Stockman's Hall of Fame', located on the Landsborough Highway, has generated a level of tourist activity which has made Longreach the premier destination in central Queensland.
In 1974 Hugh Sawrey, who was both a stockman and an artist, registered the name “Australian Stockman’s Hall of Fame” and started encouraging local people to contribute to the project. One of the contributors was the famous stockman and businessman, R.M.Williams. The idea was to use a venue in Longreach – which had been at the heart of so much outback activity – to celebrate the pioneering work of explorers, overlanders, settlers, Aborigines and all the people who had made the area rich and prosperous.
A simple sandstone cottage was constructed by R.M.Williams. It was a typical outback structure with hand-adzed timber and black marble floors. It was replaced when, after a competition to design the building was won by Felko Bouman, construction of the Hall of Fame started in 1985. Queen Elizabeth opened the building in 1988 and the structure and its contents (it was really a History of Australia with an emphasis on the outback) was so successful that, over the past three decades, literally millions of people stopped in Longreach to visit the exhibition.
The funds? Both the Commonwealth and State governments helped and the local community also did a lot of fund raising. Today it proudly declares that it is self funding.
The name is actually something of a misnomer. It should more accurately be called 'The Australian History Timeline'. Its exhibitions include a model of Aboriginal cave paintings, the first fleet (with a computerised list of all the people on the first fleet), the early settlement in Sydney,  the major explorations, the early pioneers (with a model slab hut, a hawker's van and a blacksmith's shop), the pastoral expansion, and a focus on life in the bush up to the present day. It is impossible to see it all in under two hours and many people will spend four of five hours wandering along the time line. It uses the latest audio visual techniques to great effect. For more detailed information check out https://outbackheritage.com.au or tel: (07) 4658 2166.

Qantas Founders Museum
Located over the road from the Stockman's Hall of Fame at 1 Hudson Fysh Drive, the Qantas Founders Museum has been operating since 1996 and is committed to telliing the story of Qantas (which started in Longreach) through displays, exhibits and aircraft. The first commercial flight by Queensland and Northern Territory Aerial Services Ltd (the name Qantas is an acronym) took place in an Avro 504K which took off from Longreach on 7 February 1921 at 10.30 am and took 3 hours and 10 minutes to reach Winton.
Today the museum, apart from having an extensive history of the airline, also has an aircraft collection which includes four of the world’s most iconic aircraft – the Consolidated PBY Catalina Flying Boat, Douglas DC-3, Boeing 707 and the legendary Boeing 747. In addition, there are full scale replicas of some of the early Qantas fleet – de Havilland DH-61 Giant Moth, de Havilland DH-50, and the Avro 504K Dyak - Qantas’ first aircraft. The museum is open from 9.00 am - 5.00 pm (9.00 am - 4.00 pm from December to March) with tours of the Boeing 747 and 707 as well as a 747 Wing Walk Tour and a Flight Simulator Experience. There is a downloadable brochure as well as an informative site https://qfom.com.au and the museum can be contacted by tel: (07) 4658 3737.

Powerhouse Museum and Social History Building
Located at 12 Swan Street and open from 10.30 am - 12.30 pm and 1.30 pm - 3.30 pm Monday to Friday, the Powerhouse Museum is the largest rural electricity generation plant in Australia. The building still contains the original gas-producers, eight enormous generators from different periods, and it retains the plant as it was on the last day of operation including the works siren, the Shift Manager’s “office” and a 1600 class Diesel locomotive.
In the Powerhouse Museum grounds are the Nogo cottage (depicting family life between 1935-1955), a re-created schoolroom, some office equipment from as early as 1908, interesting artefacts with pastoral, commercial, social associations, and an unusual airport control centre from the 1970s. There is also a 1930s Thomson River flood boat and the local fire engine from the 1960s. For more information tel: (07) 4658 4150.

Station Tours
There are three station tours around Longreach. Take your pick.
* Camden Park Station - a 2.5 hour tour of Camden Park Station where Queen Elizabeth and Prince Philip visited and took morning tea when they opened the Stockman's Hall of Fame. The visit includes a visit to a 1920s shearing shed and a drink and snacks while visitors enjoy the sunset. Check out https://www.outbackaussietours.com.au/tour/camden-park-station-sunset-tour or tel: 1300 787 890.
* Strathmore Station Tour - a 3 hour tour of the station includes learning about Santa Gertrudis cattle and merino sheep as well as enjoying a morning tea. Check out https://www.outbackaussietours.com.au/tour/strathmore-station-smoko-tour or  tel: 1300 787 890.
* Nogo Station - a 4 hour tour (it leaves Longreach at 7.45 am) which includes morning tea, a sheep shearing demonstration and the ruins of Captain Starlight's (Harry Redford's) stockyards. Check out http://www.outbackpioneers.com.au/experience/nogo-station-experience or tel: (07) 4658 1776.

Outback Pioneers' Cobb & Co Stagecoach Experience
There are a number of places around Australia where it is still possible to see a beautifully preserved Cobb & Co coach (Bathurst, for example) or see an old ticket office or stand outside a pub where the Cobb & Co coach stopped to let passengers alight or join, but there are few places where you can actually pay to join a Cobb & Co coach, travel around the town and then head off, at a gallop, on the original Longreach-Windorah mail route. This is the unique thrill of the Outback Pioneers' Cobb & Co Stagecoach Experience which lasts 4 hours, starts at 8.30 am at 128 Eagle Street, runs from late March to the end of October, and includes a 45 minute stagecoach ride around Longreach, morning tea, an Australian classic bush movie, a one hour Harry Redford Old Time Tent Show and a stagecoach gallop. For more information check out https://www.outbackpioneers.com.au/experience/cobb-co-stagecoach-experience or tel: (07) 4658 1776.

Cruising on the Thomson River
There are a number of cruises on the Thomson River. Each offers a unique opportunity to experience the river and the outback.
* Drover's Sunset Cruise - departs at 4.15 pm and includes sunset over the river and a dinner and outback show at Smithy's Outback Dinner & Show. It returns to Longreach around 8.30 pm. Tel: 1300 787 890. Check out https://www.outbackaussietours.com.au/tour/drovers-sunset-cruise.
* Explorer Cruise - basically an extension of the Drover's Sunset Cruise. It starts at 2.15 pm and finishes at 8.30 pm and includes the Flood Plains Nature Safari. Tel: 1300 787 890. Check out https://www.outbackaussietours.com.au/tour/ultimate-explorer-cruise.
* Starlight's Cruise Experience - departs at 4.30 pm aboard a Paddle Steamer and includes a camp fire dinner and entertainment. Check out https://www.outbackpioneers.com.au or tel: (07) 4658 1776.

Starlight's Lookout
Located 50 km (42 km unsealed) from Longreach is Starlight's Lookout. The Muttaburra-Westside Road is largely unsealed however the lookout, said to be used by Harry Redford during his cattle duffing exploits, offers a magnificent view of the surrounding countryside.

* Prior to the arrival of Europeans the area was occupied by the Iningai Aboriginal people.

* The first European through the area was the explorer, Thomas Mitchell, in 1846.

* The Thomson River was discovered and named by the explorer Edward Kennedy who came through the area in 1847.

* The area around Longreach was first explored by William Landsborough and Nat Buchanan in 1861.

* In 1863 sheep and cattle were overlanded to Bowen Downs station.

* By the early 1870s the Mount Cornish outstation had been established and Longreach grew up as a camp for teamsters who carried supplies to the property.

* By 1886 the railway from Rockhampton had reached Barcaldine.

* Longreach was officially gazetted as a town in 1887.

* By 1890 Longreach had three hotels and a police station.

* By 1892 the railway from Barcaldine reached the town.

* A major shearer's strike occurred at Longreach in 1894.

* In 1910 the Longreach Motor Company started a repair workshop for cars.

* The Heritage listed railway station was opened in 1916.

* Qantas, known at the time as the Queensland and Northern Territory Aerial Services Ltd., was set up on 16 November 1920 by Hudson Fysh and Paul McGinness.

* Local graziers funded Qantas and in 1921 a hangar was built. That year saw an electricity powerhouse begin operation.

* In 1926 Qantas operations were expanded with a workshop where seven DH50 biplanes were constructed.

* In 1938 reticulated water from the river replaced bore water for the town.

* In 1987 the Longreach School of Distance Education opened.

* The Longreach Regional Council was established in 2008.

There is an official website. Check out http://longreachtourism.com.au for information about events, eating out and accommodation. 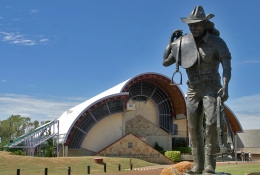 The stockman statue outside the Stockman's Hall of Fame 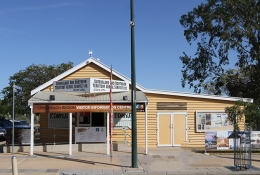 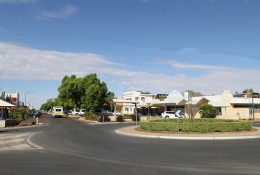 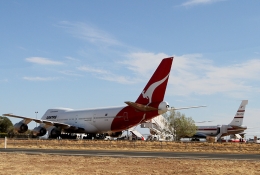 The Qantas Founders Museum with planes waiting for group inspections 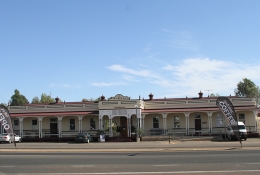 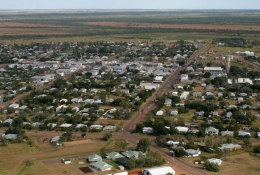 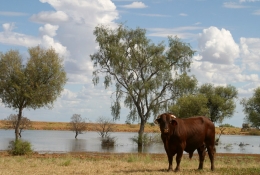 A bull beside the billabong at Camden Park station. 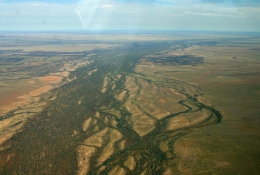 The Landsborough River north of Longreach