Louth is a tiny settlement on the banks of the Darling River which came into existence the moment paddle steamers reached Bourke and Brewarrina. It was established in 1859 when T.A. Mathews built a pub to cater for the passing river trade. Today Louth is known for its unusual 'Shining Headstone', a remarkable Celtic Cross on the grave of Mary Mathews (the wife of T.A. Mathews) which glows at sunset, and the Louth Races, one of the best and most successful racing carnivals in outback Australia.

Louth is located 858 km north west of Sydney via Dubbo and Nyngan and 99 km south west of Bourke.

Thomas Andrew Mathews, the founder of Louth and sometimes known as the 'King of Louth', named the town after the County of Louth in Ireland where he was born on 12 May, 1825.

The Shining Headstone
The one remarkable attraction in Louth is the "Shining Headstone" which has officially declared  an Australian National Monument. The headstone is the work of Peter Hoey-Finn of Bendigo who constructed it for Thomas Mathews to celebrate the life of his first wife, Mary Mathews, who died in 1869. The headstone was completed in Bendigo in 1882 and a year later it was transported up the Darling from South Australia on the Jane Eliza. It did not arrive in Louth until June, 1886. At the time the Darling River was too low and the Jane Eliza could not progress beyond Tilpa. It was eventually transported the final 90 km by bullock team. The monument cost £600 and was quarried from grey granite on Philip Island. It stood 7.6 m high and the Celtic Cross was 1.2 m high. It was positioned in such a way that on the anniversary of Mary Mathews' death, 19 August 1869, the sun reflected from the cross onto the house where she had lived in Louth. The monument was installed in such a way that it caught the light of the setting sun and reflected it through town. It is local folklore that the alignment of the headstone was achieved with the assistance of the navigational aids and expertise of the captain of the Jane Eliza.

Louth Races
In 1959 Bob Horten formed the Louth Turf Club and organised an annual race meeting to be held on the first Saturday after the August Bank Holiday. The first meeting was rudimentary. The toilets were made of corrugated iron and the horses were stabled in the open. Today the race meeting attracts over 5,000 people. Check out http://www.louthraces.com for more details.

* Prior to European settlement the Barranbinya Aboriginal language group lived in the area.

* The first European to travel through the area was Charles Sturt who, in 1828 and accompanied by Hamilton Hume, reached the Darling River north of Louth.

* In 1835 Sir Thomas Mitchell travelled down the Darling and passed the present site of Louth.

* As a result of these early explorers pastoralists moved into the area.

* In 1859 Captain W. R. Randall sailed the Gemini up the Darling River from South Australia to Bourke. Immediately Bourke became the transport centre for the whole of south west Queensland and western New South Wales.

* That same year (1859) Thomas Andrew Mathews built a pub, the Daniel O'Connell Hotel, to cater to the passing river trade. Louth was also a stopover on the Cobb & Co run and one of Mathews' sons became a noted driver for the coaching firm.

* In 1866 Thomas Mathews purchased 200 acres of which 40 acres were divided up into house blocks along the Darling River. He also built a bonded store where goods could be stored. Around this time he became known as the 'King of Louth'.

* In 1880 the village held its first race meeting - the Louth Christmas Races which had a two race program.

* In 1888 Dunlop Station, owned by Sir Samuel McCaughey, became the first property in the world to experiment with mechanical sheep shearing. So revolutionary was the experiment that the shearing shed was subsequently visited by the Governor of New South Wales.

* By the 1890s the town had grown substantially. Local wool was being transported upstream to Bourke and copper ingots from Cobar were being transported down river by steamer and barge to Morgan in South Australia. The town comprised a brick post office and residence dating from the 1880s, a school, police station and the Dan O'Connell Hotel. A ferry carried sheep, the Cobb & Co. coaches and the travelling public across the Darling and the telegraph connected the town to the rest of the world.

* In 1959 Bob Horten formed the Louth Turf Club and organised an annual race meeting to be held on the first Saturday after the August Bank Holiday.

* Today Louth is a tiny stopover on the journey from Bourke down the Darling River to Wilcannia. 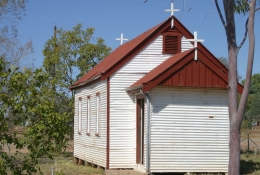 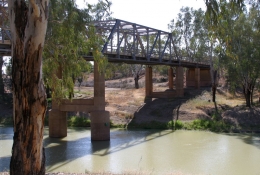 The bridge across the Darling River at Louth. 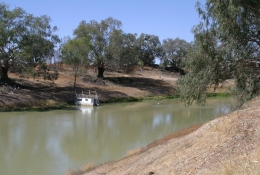 A houseboat on the Darling River at Louth. 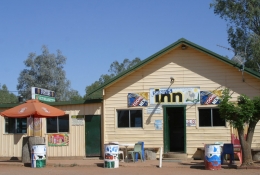 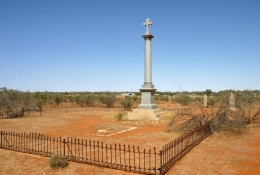 The Shining Headstone in the Louth Cemetery. 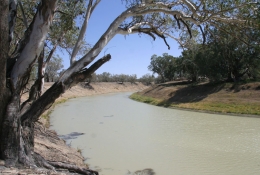 The Darling River at Louth.