Lucknow is one of those 'now you see it, now you don't' kind of towns. The traveller, journeying between Bathurst and Orange, rushes through the town, notices a strange piece of machinery beside the road (it is a poppet head) and keeps driving on the Mitchell Highway believing that this faux township with a prominent skin shop has little to offer. In reality they are missing out on an opportunity to explore a town made rich by gold which once prospered, had a major period of successful mining involving crushing the ore and processing it and, over a period of eighty years, yielded a staggering 14,000 kg of gold. It is worth stopping and exploring.

Lucknow is located on the Mitchell Highway 9 km south-east of Orange and 245 km north-west of Sydney.

No one knows exactly how the town got its unusual name. Some explanations suggest that it was named after Lucknow in India because the bookkeeper at one of the mines had been wounded at the Seige of Lucknow in 1857. Others suggest it was named Lucknow as a contraction of 'luck now' which was what had happened to so many of the gold mining residents. It is known that the name was first used in 1863.

Wentworth Mines
The Wentworth Main Mine, located at the eastern end of the town, is easily recognised by its landmark poppet head, which still has part of the winding gear attached. The poppet head was built in 1935 to bail water from the mine workings into the creek. The problem with rising water continued to plague the mines which are now all flooded. The plant ran 24 hours a day, seven days a week, but the mine’s main income came from the cyanide vats where gold and other ore were extracted from the old tailings dump. The corrugated iron buildings near the poppet head were built early in the twentieth century. Today the site has an equipment store, medical room, blacksmith, machinery building, stamper battery shed, mine office and mine manager's cottage. It is a compliment to their commitment to the history of Lucknow that the Orange City Council purchased the Wentworth Main Mine and is slowly developing the site as a tourism and educational facility. It is opened to the public Saturday and Sunday once a month. For times of opening, and much more information, check http://www.wentworthmine.com.au/

Lucknow Heritage Trail
The Heritage Trail is a circular journey around the town which begins at the Wentworth Gold Mine. The trail then identifies a total of 17 places of interest (it provides some fascinating anecdotes about many of the town's historic residents and buildings) and takes the visitor from the Wentworth Gold Mine to a number of miner's cottages, the Reform Mine which has been described as "the richest small gold field of its type in the world" and around the town's important mining heritage sites. The brochure is available from the Orange Visitor Centre or it can be downloaded at http://www.bookeasy.com.au/website/images/orange/lucknowheritagetrail.pdf

Historic Buildings
The town has many historic buildings of which the most significant are:

* The Reform Mine - the Heritage Trail brochure notes of its very prominent poppet head (it is on the Mitchell Highway and can't be missed) that "The Reform Mine has been described as the richest small gold field of its type in the world. Mining began here in the 1870s or earlier and prospered until the late 1890s. In 1935 the Wentworth Company built a new poppet head over the shaft to pump water in conjunction with the Wentworth Main shaft. At the height of the gold rush the whole hillside beyond the Reform site was a hive of activity, including a battery, foundry and grand two-storey mine office, along with houses, stables and numerous shafts and tunnels. Behind the Reform poppet head, impressive remains of bluestone walls can still be seen. Built on a series of levels, these formed the foundations of the mill, or battery. The small corrugated iron shed behind the poppet head, old equipment and overgrown mullock heaps are other reminders of years of toil by hundreds of men."

* Bark Hut - In the town's earliest years a bark hut was built to operate both as a school and a church for both Anglican and Wesleyan services. It was replaced in 1873 by the  bluestone and sandstone St John's Anglican Church. It is in Newman Street.

* Schoolhouse - In 1864, a schoolhouse which had been built to replace the bark hut, blew down and it was replaced in 1878 by a brick and stone building. In 1900 new wooden classrooms were added. The school closed in 1971 and is now a community hall.

* 'Mamhead' is recognised as the town's most significant private building. It was constructed as the residence of mine owner and entrepreneur, Henry Newman, in 1879. It was named after Newman's family home in England and was home to his 14 children. The building is an esoteric mixture of styles, with rendered masonry, hipped and gambrel roofs, numerous chimneys featuring decorative moulding, cast-iron veranda columns and timber louvred shutters. It is located by the corner of the Mitchell Highway and Carroll Street.

* School of Arts - On the Mitchell Highway between Newman and Carroll Street is the School of Arts which was built in 1887 and, over the years, has served as a library, dance hall, silent movie theatre, garage and general meeting place. A function for Governor-General Northcote was held in the hall in 1906 and the Gilgandra Coo-ee marchers stopped at the hall during their march to Sydney. It was restored by Orange City Council in 1999.

Huntley Berry Farm
Huntley Berry Farm is operated as an Australian Disability Enterprise. It has a cafe and sells directly to the public. The great attraction is that visitors can pick their own berries from November to May, tel: (02) 6365 5282. Check out http://www.huntleyberryfarm.com.au

* Prior to the arrival of Europeans the district was home to the Wiradjuri people.

* The first European to pass through the area was Lieutenant Percy Simpson who was heading towards Wellington where he established a settlement for convicts.

* By 1824 a government station-cum-garrison had been established near modern day Lucknow as a resting place for those travelling to the Wentworth penal settlement.

* In 1838 the explorer William Charles Wentworth had purchased property in the area which he subsequently leased to a Captain Raine.

* In May, 1851 Wentworth's estate became the site of Australia's second gold discovery. The gold was discovered by two local farmers on a hill behind what is now the village but, as the land was owned by Wentworth, he demanded they pay monthly royalties. This arrangement was short-lived as Wentworth kept raising the rates.

* In April, 1852 Wentworth sold his estate to the Wentworth Gold Field Company. They were the first gold mining company to be formed in Australia but they were short-lived. They went into liquidation in 1860 and two years later the land was opened to the public on monthly leases.

* Through the 1860s the town boomed. The village was formally named 'Lucknow' in 1863. The following year a Catholic church was built. By 1866 there were four hotels, a public school (built in 1864),  a police station, general store, a butcher, blacksmith, bootmaker and baker.

* Between April 1862 and February 1867 the Bank of New South Wales and the Commercial Bank purchased 1,962 kg of gold with the largest nugget weighing 76 kg.

* In 1873 the Uncle Tom Company was formed but it closed due to lack of funds. It was subsequently purchased by Henry Newman who reopened it in 1878, made a fortune, and then lost it all.

* Lucknow was run by private mining companies until 1913 when the land was subdivided into smaller parcels.

* After World War I the Bismarck Group recommenced mining and operated  successfully between 1929-1937. There has been no further commercial mining since 1937. It has been estimated Lucknow yielded around 14,000 kg of gold between 1851-1937.

Lucknow has no visitor information. For information and a copy of the Lucknow Heritage Trail check out Orange Visitor Centre, 151 Byng St, tel: (02) 6393 8226.

The Heritage Trail PDF - http://www.bookeasy.com.au/website/images/orange/lucknowheritagetrail.pdf - is the best overview of the town. 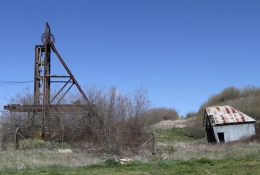 The Reform Mine poppet head on the Mitchell Highway. 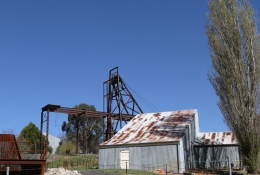 The poppet head and corrugated iron buildings at the Wentworth Main Mine site. 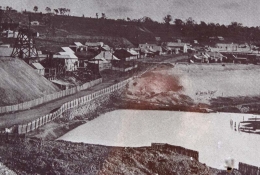 A photo of Lucknow around 1900 - a thriving goldmining town. 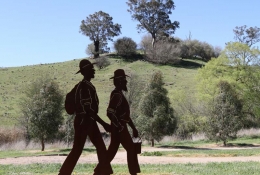 Silhouette figures of gold prospectors on the Heritage Trail.