Historic town at the crossroads of the Strzelecki and Oodnadatta Tracks

Lyndhurst is an historic railway town in the desert of northern South Australia. Today it is now nothing more than a few buildings, some ruins and some rusting old equipment, at the crossroads of the Strzelecki and Oodnadatta Tracks. There are two attractions: the talc sculptures of Talc Alf and the remarkable Ochre Cliffs which have been mined by Aborigines for sacred purposes for tens of thousands of years.

The Government Surveyor, Samuel Perry, named Mount Lyndhurst after the British Lord Chancellor, John Copley, the first Baron Lyndhurst. By the 1860s a property in the district was called Mount Lyndhurst. It was only a small step to give the town the same name.

Talc Alf and his art
Talc Alf, his real name is Cornelius Johan Alferink, was born in the Netherlands in 1945. His workshop and retail outlet, which is very clearly signposted, is located a couple of kilometres out of Lyndhurst on the Innaminka Road. Over the years, because he has become a famous outback eccentric, Talc Alf as been featured in numerous magazine and TV pieces. He moved to this isolated area in the 1960s because he fell in love with the idea of working in talc and found that there were good deposits at Mount Fitton. He specialises in producing stylised carvings in talc stone, has a highly eccentric explanation for the origins of the alphabet, and proudly shows visitors his design for a new Australian flag where the red, black and gold Aboriginal flag simply replaces the Union Jack. There are many examples of his work featured at https://www.southaustralianhistory.com.au/talcalf.htm.

Ochre Cliffs
Located 5 km north of Lyndhurst are the hugely important ochre cliffs. A road heads west for a couple of kilometres from the main Lyndhurst-Marree road to a remarkable quarry which is a feast of harsh desert colours - reds, and yellows and browns. For tens of thousands of years it was a hugely important site for the local Aborigines and it is believed that ochre quarried here was traded with other groups of Aborigines who lived hundreds of kilometres away. There is evidence of the ochre as far away as the Northern Territory, Queensland and the South Australian coast. The ochre was mainly used for painting bodies during ceremonies. There is a very detailed article on the use of ochre which can be acccessed at https://ontheroadmagazine.com.au/ancient-mines-remarkable-cross-country-trade-ochre.

Farina
Located 29 km north of Lyndhurst off the road to Marree is the ghost town of Farina which is now nothing more than ruins with the surrounding countryside littered with old drays, wheels and rusting pieces of equipment. There once was a town with a population of around 600 people but it collapsed when the copper and silver mine closed in 1927. Today all that is left is the Farina Campgrounds with flush toilets and showers and accommodation in the Shearer's Quarters. The sign at the ruins explains: "Farina was proclaimed a town on 21-3-1878. Originally called 'Government Gums", but later called Farina by Governor Jervois. The name comes from the Latin word for "flour" and original plans were to grow wheat, but the climate proved unsuitable. Farina was the railhead from Port Augusta from 22-5-1882 until 1884 when the line was extended first to Marree and then to Alice Springs. The line closed in the 1980s and was removed in 1993. Railways buildings included platforms, goods sheds, sheep and cattle yards, station master's residences, workman's cottages etc and a 5 million gallon reservoir was built. Afghan camel drivers lived on Afghan Hill on the eastern side of the town. They brought in wool from the stations and delivered supplies to them. Chinese came to Farina as construction workers on the railway and some stayed on as gardeners. A school opened in 1879. Hotels "Transcontinental" and "Exchange". Post office, savings bank, telegraph station, police station, Anglican and Roman Catholic churches, general stores, bakery, brewery, blacksmith, saddlery, hospital and butchery. The Farina cemetery was used last in 1960. The town was finally deserted in the 1980s but in its heyday the population reached approximately 300 residents in the township."

The Amazing Harry Redford Story
It is claimed that the Strzelecki Track was pioneered by Harry Redford's famous exercise in cattle duffing which started near Muttaburra in western Queensland. In Queensland in the 1870s bushcraft, courage and delivering a bloody nose to the owners (“toffs”) of the new, and huge, cattle stations was seen as an heroic and noble endeavour worthy of admiration, not censure.
Harry Redford who, less than a decade after Burke and Wills had so comprehensively lost their way in western Queensland, stole 100 bullocks, 100 cows, 100 heifers, 100 steers and one white bull from Bowen Downs Station and drove them down the Cooper Creek and into South Australia. The area upon which modern-day Muttaburra stands was at one end of this vast holding.
It was an extraordinary achievement which Rolf Boldrewood later used as the basis for his novel Robbery Under Arms and the main character Captain Starlight. In old age people used to refer to Redford as “Captain Starlight”.
The only problem with the achievement was that none of the cattle belonged to Redford. While working on Bowen Downs this enterprising son of a convict (he was born near the Hawkesbury River in 1842 and was a huge man who stood over two metres tall) realised that Bowen Downs, which was running around 70,000 head on 1.75 million acres, really wouldn't miss 401 cattle.
His only mistake was the white bull. He needed it as the leader but it was very distinctive and easily identifiable.
Redford drove the cattle 1300 km through marginal desert country down the Cooper Creek to the Blanche Water station about 134 km north-east of Lyndhurst where he sold them for £5000.
However the disappearance of the white bull was noted and in February 1871 Redford was arrested and brought back to Roma to be tried.
From the outset the trial was more entertainment than serious investigation. Locals, captivated by Redford's consummate bushcraft and daring, packed the courtroom. The white bull stood in a yard outside the courthouse. Forty-one of the forty-eight people called as possible jurors were dismissed because they were prejudiced. The white bull took part in a bovine line up with twenty other bulls and was immediately identified by its owner.
The evidence against Redford was overwhelming. The defence offered no witnesses and complained that Redford had been gaoled without trial. The jury retired for an hour and then delivered their verdict.
The court transcript reads:
Judge: What is your verdict?
Foreman of the Jury: We find the prisoner 'Not Guilty'.
Judge: What?
Foreman of the Jury: Not guilty.
Judge: I thank God, gentlemen, that the verdict is yours, not mine!
After his acquittal Redford headed into northern Australia where, by the 1880s, he was managing the famous Brunette Downs station.
As for Roma, well the verdict so outraged the legal establishment that it is effectively banned the town from holding "trials by jury" because it was felt that the locals could not be trusted to punish criminals they admired.
After his acquittal Harry Redford headed into northern Australia. He worked as a drover on the Atherton Tableland and around the Gulf country. In 1883 he moved the first herd of cattle from Queensland to the Brunette Downs station where he was appointed manager. For many years he oversaw the McArthur River station on the Gulf of Carpentaria and was known around Burketown as the model for Boldrewood's Captain Starlight, although he refused to acknowledge the obvious similarities.

* Prior to the arrival of Europeans the area was home to the Andyamathanha Aboriginal people.

* In the 1860s large areas of land were taken up in the area. Thomas Elder took up a property in the district which he named Mount Lyndhurst.

* In 1870 Harry Redford overlanded cattle 1300 km to the Blanche Water station north of Lyndhurst. It has been claimed that the Strzelecki Track was pioneered by this journey which started near Muttaburra in western Queensland.

* The railway reached Lyndhurst in 1882.

* By 1890 a post office and general store had been opened.

* Lyndhurst was gazetted as a town in 1896. That year saw the opening of the Lyndhurst Hotel.

* The last train through Lyndhurst ran in 1980.

There is no website for Lyndhurst. A history of the town can be found at https://www.southaustralianhistory.com.au/lyndhurst.htm. 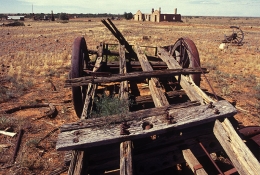 Harsh, dry and little more than rust and ruins 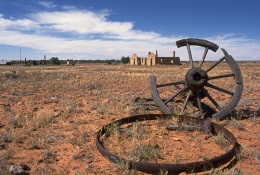 Ruins are all that are left of the town of Lyndhurst 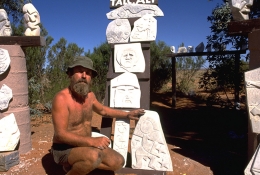 Talc Alf with his remarkable sculptures 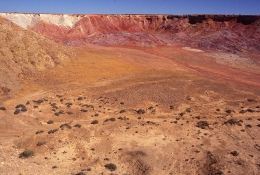 Ochre Cliffs of red, yellow and white lie to the north of the town