Lyndoch is a town at the southern end of the Barossa Valley which exists primarily as an access point to the many surrounding vineyards and, also, as part of Adelaide's increasing commuter belt. Lyndoch's main street is typical of a vineyard tourist destination with unusual shops, a traditional German bakery and cafes serving good coffee and local produce. The district is known as ‘The cool end of the Barossa’.

Lyndoch is located only 56 km from Adelaide via Elizabeth and Gawler. It is located at the southern end of the Barossa Valley.

In December 1837 Colonel Light reached the area and on 13 December, 1837 he recorded "At length, about 5 pm, we came to a beautiful valley which I named Lynedoch Vale after my much esteemed friend, Lord Lynedoch."

Lyndoch Town Historic Walk
There is a downloadable Lyndoch Town Walk Guide which identifies a total of 30 places of interest in Lyndoch. Check it out at https://www.barossa.sa.gov.au/Media/Default/Community%20and%20Cultural%20Services/Libraries/Barossa%20Heritage%20Trail/Lyndoch%20Town%20Walk.pdf. It also provides a detailed map of the town. Of particular interest are:

4. Old Council Office
Looking like a private home, which it is now, this interesting building on the Barossa Valley Highway was built as a saddlery in 1861. The room at the end was used as the Barossa District Council office frm 1928-1960.

6. Lord Lyndoch Inn
This attractive single storey building in Gilbert Street dates from the 1840s. It was the first of the Lord Lyndoch hostelries in the town and was licensed from c.1847-c.1855 and probably known as the Barley Sheaf Hotel. It now is occupied by a number of boutique shops.

6. Grain Crushing Wheel
Directly over the road from the Lyndoch Hotel, in Fiebig Square, is a grain crushing wheel which was made around 1855 and used in the Lyndoch Valley Flour Mill until around 1910. It was saved when the mill burnt down in 1958.

8. Lyndoch Institute
Look carefully at this simple building. It was built in 1912 as a hall and library but then in the 1940s someone decided it would be greatly improved if they added an Art Deco facade.

13. Lyndoch Hotel
A prominent building on the corner of Gilbert Street and Lyndoch Valley road, this attractive pub dates from 1869 when it was known as the Farmers Rest Hotel. At the time it was known to have the longest bar in South Australia. It was burnt down and subsequently rebuilt in 1914.

15. New Lord Lyndoch Hotel
Located at 23 Barossa Valley Way, the Lord Lyndoch Hotel was built in 1855 by Stephen Gower at a cost of around £1000. It had 16 rooms, a dining room and an extensive balcony. Over the years it has been used for council meetings and court trials. It closed in 1872 but was relicensed in 1914 as the Railway Hotel. By 1920 it was a Temperance Hotel and then a boarding house and currently a restaurant.

Barossa Reservoir and Whispering Wall
The Whispering Wall is located 9 km south-west of Lyndoch via Pimpala Road and is a genuine acoustic miracle. The curved retaining wall of the Barossa Reservoir, which is about 140 metres long, has acoustics that allow a person on one side of the wall to speak in a normal voice and a person at the other side of the wall can hear them clearly. The SA Memory explains: "The Barossa Reservoir's 'Whispering Wall' dams the Yattie Creek Gorge near Williamstown in the Barossa Valley to the north of Adelaide. The water supply comes through a tunnel from the South Para River. The dam is known as the Whispering Wall for the way in which it carries sound from one side of the Wall to the other. As the Wall is one part of a perfect circle, the sound waves bounce in a series of straight lines to the other side. The dam was designed by the Irish-born engineer Alexander Moncrieff and attracted worldwide attention at the time of its construction, as the idea of a tall but thin concrete structure curved against the pressure of the water was quite radical. The dam is more than 10 metres thick at the base and tapers to a narrow walkway at the top. It is constructed of primarily from concrete and 'plums' - quartz boulders blasted from the sides of the gorge. Old tram tracks were added for extra strength near the top. Construction of the dam began in 1899 and was completed in 1903. About 400 workers and their families set up camp near the building site at the height of construction." For more detailed information check out http://www.samemory.sa.gov.au/site/page.cfm?u=283.

Wineries
Wineries in the Area
In areas like the Lyndoch district, where there are a number of cellar doors, it is best to refer to the specific knowledge of the wine experts. The Barossa Australia website, an excellent site (check out https://www.barossa.com/wine/wineries-search?keywords=&location=Lyndoch&custom-categories=&facilities=) has extensive information about the wineries in the region. It provides maps to each of the wineries and a hot link to their specific websites. There is also a useful Iconic Winery Trail with recommendations and information which can be accessed at http://www.daytrippa.com.au/barossa-valley/full-guide/daytrip/4073.

Jack Bobridge Track
Lyndoch is a stop on the Jack Bobridge Track, a shared cycling and walking path that goes from the outskirts of Gawler through Lyndoch and Rowland Flat to Tanunda and continues as the Barossa Trail to Nuriootpa and Angaston. The 14 km section from Tanunda to Lyndoch is a wonderful cross-section of the region with forests of tall gums as well as panoramic views across vineyards and vistas. There are a number of cellar doors along the way (you can't be fined for drunken cycling or walking) including the famous Jacob's Creek which even offers cycle hire. The area is home to kangaroos, echidnas and is rich in birdlife. There is a brochure on the route which can be downloaded at https://www.barossa.com/uploads/4048_bbb_final.pdf. Check out https://www.barossa.com/visit/see-do/cycling/the-barossa-trail/jack-bobridge-track-stage-1-tanunda-lyndoch for details and information about various stages of the track.

Rose Garden at Lyndoch Hill
Located at 1221 Barossa Valley Way, Lyndoch Hill Rose Garden has over 30,000 roses in a garden which covers 25 acres (10 ha). It was opened by Queen Elizabeth II in 2002 and since then has become a major tourist attraction in the Barossa.

Lyndoch Lavender Farm
Located at 407 Tweedies Gully Road (off Lyndoch Valley Road, the Lyndoch Lavender Farm & Cafe is the largest lavender farm in South Australia. It is possible to take a tour, enjoy the cafe and purchase products. The farm and farm shop are open from 10.00 am - 4.00 pm seven days a week. For more information tel: (08) 8524 4538 or check out https://lyndochlavenderfarm.com.au.

Hoffnungstahl
Located 3 km south-east of Lyndoch (via the road to Lyndoch and Hoffnungstahl Road) is a memorial to one German pioneer settlement which did not survive. Monument Australia notes of the settlement: "Founded in 1847, it was located in an ephemeral lagoon which was dry for the first years of settlement. Local Peramangk people warned the settlers that the area was prone to flooding, but this advice was ignored. In October 1853, after a week of heavy spring rains, the village was flooded and many of the houses were evacuated. After the cost of a proposed drain was seen as prohibitive, the village was eventually left deserted and while a few remained in the area the settlement was eventually abandoned." Check out https://monumentaustralia.org.au/themes/landscape/settlement/display/94353-hoffnungsthal-pioneer-memorial fo more details.

* Prior to the arrival of Europeans the area was home to the Peramangk Aboriginal people. They lived on a diet of grass seeds, kangaroos, wallabies, possums, lizards and fish and protected themselves against the winter cold with possum skin rugs.

* By December 1837 explorers, led by Colonel Light, had reached and named Lyndoch 'after my much esteemed friend, Lord Lynedoch.'

* In 1838 other explorers (Hill, Wood and Wiles) passed through the area on their way to the Murray River. They noted: 'March 3 (1838) At 9 o'clock we arrived at Lynedoch Valley - a beautiful place, good land and plenty of grass, but no springs or running water. Saw many kangaroos during the morning.'

* Edward Rowland took up land in the early 1840s at what was soon named Rowland Flat.

* Lyndoch can claim to be the first place in the Barossa Valley where grapes were grown.

* By 1847 a Mr Gilbert had planted an acre of grapes at Pewsey Vale.

* Similarly Johann Gramp planted grapes at Jacob's Creek and by 1850 he had produced his first wine.

* In 1911 the Barossa Valley railway line reached the town.

* In 1968 passenger services on the local railway ceased.

* Today Lyndoch is in the heart of the Barossa and is surrounded by a large number of wineries.

There is a lot of information about the area and the town at https://www.barossa.com/search?keywords=Lyndoch. 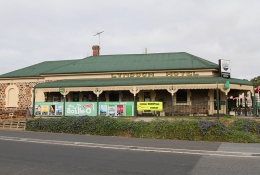 Lyndoch Hotel, rebuilt after fire in 1914. 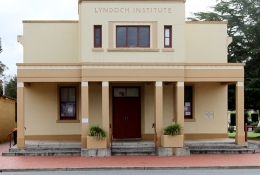 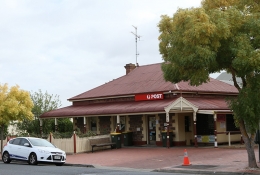 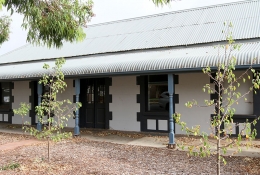 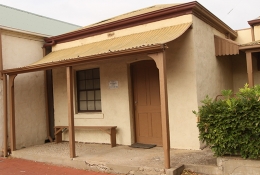 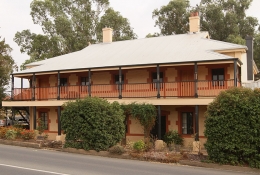 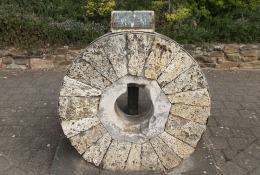 The old grain crushing wheel opposite the Lindoch Hotel 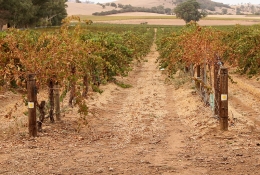 Vineyards stretch across the valley from Lyndoch 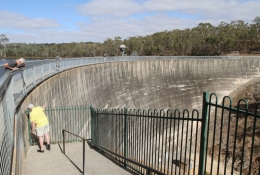 The whispering wall near Lyndoch has remarkable acoustics 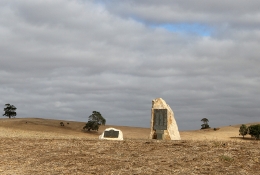 The Hoffnungstahl Memorial to a German pioneer settlement in the valley