Service town on the Nambucca River

Macksville is an attractive service town located on the banks of the Nambucca River 12 km south of Nambucca Heads and 3 m above sea-level. It is a fishing and oyster-farming centre which services a productive area noted for its bananas and other tropical fruits, along with vegetables, grazing, dairying and timber.  Today Macksville is a place where people driving north and south along the Pacific Highway stop for a break either at the Star Hotel or in the delightful Lily Pond and Rotary Park.

Macksville, located on the banks of the Nambucca River in northern NSW, is 3 metres above sea level and 474 km north of Sydney via the Pacific Highway.

There is something delightfully simple about the origin of the name. Two of the early settlers were Angus Mackay and Hugh McNally. They built the Star Hotel. Not surprisingly when a village was established it was called 'Mack's Village' and from there it was a short step to Macksville.

Star Hotel
The Star Hotel (1885), is located on River Street not far from the Macksville Bridge, and is reputedly the oldest original hotel on the north coast of New South Wales. It still has the old Tooths advertisements on the walls depicting 1950s sports heroes all eager for a Tooths. Local red cedar were used for the bar and the staircase. A delightful way to spend time in Macksville is to sit on the veranda with a drink and watch the activity on the Nambucca River. Dolphins have been known to come this far up the river.

Mary Boulton Pioneer Cottage
Located 2 km east of the bridge, along Gumma Road, and beyond the Star Hotel, is Mary Boulton's Cottage, a replica of a typical rough-sawn timber house which was commonly built by the early timber getters in the Macksville district. It is set in a pleasant, suitably wild, garden on the riverbank. The display includes historic kitchen utensils, furniture, costumes, horse-drawn vehicles, tools of the trade and other memorabilia. Mary Boulton was a descendant of some of the valley's earliest European settlers. The garden and outbuildings include "an early cell from Macksville Police Station; horse drawn vehicles; a dairy where cans of cream were stored; tools and implements from the dairy, beef, banana and farm crop industries; and household, personal and clothing items that Grandma (or Great Grandma) would have used including a timber laundry trough. Early businesses have not been forgotten with the MIDCO display prominent; a seat from the first hotel and a rake used to harvest oysters. Parish maps of the district and charts of early town sub divisions, numerous local history books, files and photographs, and staff to assist with research." The cottage is open from 1.00 pm - 4.00 pm on Wednesday and Saturday and by appointment, tel: (02) 6569 8396 or (02) 6568 1280. Check out http://mgnsw.org.au/organisations/mary-boultons-pioneer-cottage-museum for more details.

Lily Pond and Rotary Park
Macksville has become an increasingly popular place to stop on the journey up and down the coast. With this in mind the local Rotary Club developed the Lily Pond which lies between the Pacific Highway and Princess Street (after Woolworths and before the Caltex service station). It is home to local birdlife and is an ideal place to stop for a picnic.

Valley of the Mist
Located at 88 Congarinni North Road, Talarm (5 km west of the town offf the Taylors Arm Road)  Valley of the Mist is a working Bush Tucker farm set in 47 hectares of beautiful bush land forest. An orchard of 10 ha is dedicated to growing native fruits and nuts using low impact sustainable farming methods. Visitors can observe how the Davidson plum - a fruit grows in huge bunches from stems which form directly on the tree trunk - is grown. Valley of the Mist is also a wetland wildlife sanctuary. Over 77 ha of rare pristine east coast wetlands have been recognised as being habitat of international importance and is home to an amazing diversity of native bird, animal, reptile, and marine life. To date over 120 species of birds have been recorded in the wetlands, including Jabiru (Black Storks), Black Swans and Ospreys. These rare near-pristine and ecologically healthy wetlands are one of the last places on the East coast of Australia where such a wide range of wildlife can be seen in its natural environment. Valley of the Mists’ bush tucker orchard is a great example of how farming can be sustained with minimal impact on nature. Check out http://valleyofthemist.com.au for details of tours.

The Pub With No Beer
The only hotel in Taylors Arm is the Cosmopolitan Pub [now it has changed its name to the title of the song] which was the subject of the song, 'The Pub with No Beer'. Sung by Slim Dusty it was the first Australian song to reach No.1 in the British pop charts. It is said that Dusty's version recounted the adventures of the regulars who used to drink at this old and isolated timbergetters' watering hole in the 1940s.
It is claimed that the song's origins lie with some verse written by a Dan Sheahan of Ingham in Queensland. One version argues that Sheahan rode into Ingham for a drink during World War II only to find that the local pu, the Day Dawn Hotel, had been drunk dry by American serviceman. His version is very different from the Slim Dusty version.
The song that is well known is usually credited to bush worker and folk singer Gordon Parsons who may well have transformed Sheahan's verse. At any rate it became a national number one in the hands of Slim Dusty.
The Cosmopolitan is now officially called The Pub with No Beer and The Pub With No Beer Festival is held in Taylors Arm every year at Easter, tel: (02) 6564 2101.

* Prior to the arrival of Europeans the area is thought to have been occupied by either the Kumbaingeri or Ngamba Aborigines.

* In 1820 the explorer, John Oxley, travelled for a short distance up the Nambucca River.

* The first Europeans to settle in the area were two cedar-cutters and William Miles, a stockman from Yarrabandinni, who explored the Nambucca and Bellinger Rivers while searching for timber in 1839.

* By the 1850s farmers were growing crops on the rich alluvial soils of the Nambucca Valley.

* A small settlement known as Nambucca or Central Nambucca emerged in the 1870s at the same time as Bowraville and Nambucca Heads. All three towns became service centres for the selectors, timbergetters, fishermen and miners who lived in the district.

* The town's present name derives from two Scotsmen, Angus Mackay and Hugh McNally, who subdivided their selections for a township which became known as 'Mack's Village'.

* In 1882 the Nambucca Hotel became the first hotel in the town.

* In 1885 McNally built and became the first licensee of the Star Hotel.

* The government wharf started operating in 1886.

* The 1891 census revealed that Macksville had a population of 118.

* By 1897 the village had 120 settlers, a police station, courthouse, post office, school and bank.

* By 1908 there was a punt at the bottom of Princess Street to take people across the river.

* In 1931 the bridge was officially opened across the Nambucca River.

* A park in town is named after Frank Partridge, a local who won the Victoria Cross in 1945 for leading a successful attack against Japanese bunkers in the Bougainville campaign.

* The Pacific Highway was developed in the 1960s.

Nambucca Valley Tourism has a website which has information about the district. Check out https://www.nambuccatourism.com.au/nambucca-valley-region/nambucca-valley/macksville. 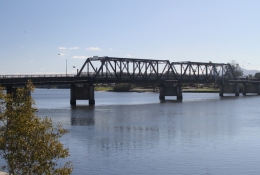 The bridge across the Nambucca River at Macksville. 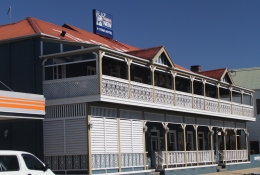 The Star Hotel overlooking the Nambucca River at Macksville. 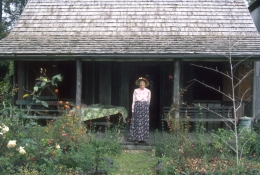 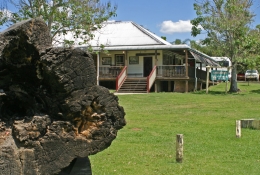 The Pub With No Beer and the huge log outside at Taylors Arm.