Roadhouse and service centre on the road across the Nullarbor.

Madura is a popular roadhouse on the Eyre Highway across the Nullarbor Plain. It offers fuel, a motel and caravan park, a licensed restaurant and bar, and the luxury of  a swimming pool. The most dramatic feature in the area is the Madura Pass where, after hundreds of kilometres of flat terrain, the road suddenly rises from the Roe Plain.

Madura is located 1248 km east of Perth via the Great Eastern and Eyre Highways. It is 528 km east of Norseman and 1447 km west of Adelaide.

No one is sure what Madura means. It is almost certainly an incorrect translation into English of a Mirning Aboriginal word. The first use appears to be Surveyor Turner who journeyed through the area in 1885 and recorded the name as  "Moodeera". He did not offer a meaning.

The Longest Golf Course in the World
Nullarbor Links Golf Course
A very typical Aussie outback joke the Nullarbor Links Golf Course is the world’s longest golf course with the first hole in Ceduna, South Australia and the 18th hole 1365 km away at Kalgoorlie. Check out the details at http://www.nullarborlinks.com. It is real and can be a lot of fun for committed golfers.
Hole 9: Madura Brumby's Run Par 3 and is 125 metres.
If you can shoot straight this is probably the easiest hole on the entire course. Located over the road from the motel and roadhouse it is  a Par 3 holes where, if you are straight and accurate, you will get par without any trouble. It is only 125 metres long. If you are not straight you will spend too much time in the bushes and end up with a score that you will not want to mention to your friends.

Robbie’s Guide to the Nullarbor Links
Madura – Brumby’s Run
A short Par 3 with a slightly uphill to the green. Slightly left of the flag is the best line to arrive on the upper tier of the putting surface. Accuracy is essential as the green is protected by scrub left and right. Beware of the crows.
The notes on the website explain: "Originally Madura was settled as a pastoral homestead in about 1876. Madura's early history is rather sketchy, however for many years the area was well known for producing quality polo and cavalry horses for the British Imperial Indian Army. At the time these fine stock horses were employed in various British campaigns on India's rebellious Northwest Frontier. Later known as "Walers", these horses were bred at Madura by an ex-Army Officer who overlanded them to Eucla for shipment to foreign ports. During World War 2 Madura was a site of importance to Australian Army engineers who were intent upon upgrading what is now known as the Eyre Highway. At the time Madura was the only known site with free flowing bore water throughout the Eucla artesian basin. To obtain this supply the Western Australian Government financed the drilling of a borehole to a depth of over 300 metres. Whilst Madura's brackish water supply was perfectly suitable for grazing stock, it nevertheless needed to be desalinated for human consumption." The tee is called the Barbara and Brian Pike.

Madura Pass and Lookout
The highlight of the area is Madura Pass which takes the traveller by surprise and offers a fine view from the Madura Lookout. It is located to the west of the roadhouse and drivers from Western Australia who have, for hundreds of kilometres, believed that they were travelling on a totally flat plain, suddenly find themselves descending quite steeply onto the coastal plain. The difference between the Hampton Tablelands and the Roe Plains is a result of both differing sea levels, laying down beds between 15 and 45 million years ago, and of a dramatic geological uplift.

Mullamullang Caves
The people at the Madura roadhouse will also provide directions to the Mullamullang Cave which lies 28 km to the north-west of Madura and which is reputedly the second largest cave in the Southern Hemisphere. There is a detailed description of a descent into the caves at http://adventures.net.au/4WD_Expeditions/nullarbor_trip.htm. It notes "The more nimble members of the group descended about 60 metres into the northern entrance of the cave.  Further descent would have been hazardous without specialised equipment. Some of the drops were so deep the torch beam could not penetrate them.  The cave is so large that groups of speleologists have been known to spend up to ten days underground exploring its depths.  Emerging from the cool environment of the cave made the early morning heat even more noticeable."

* The first European settlement occurred around 1876 when G. Heinzmann took up land in the area and established Madura Station. It was some time after that when an ex-British Army officer started breeding horses to be sold to the British Army in India. The horses were taken to Eucla where they were shipped to India.

* In the 1920s the Western Australian government drilled a borehole 300 metres deep and reached saline water. There is now a desalination plant.

There is a good, comprehensive overview of the accommodation and facilities at the roadhouse on http://www.nullarbornet.com.au/towns/madura.html 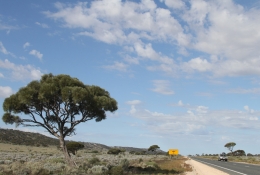 A section of the Eyre Highway used as a landing strip for the Royal Flying Doctor.

The view across the Roe Plains from the Madura Lookout 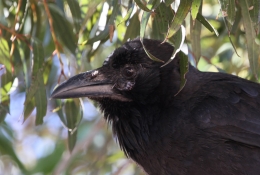 The crows sit in the trees waiting for your white balls. 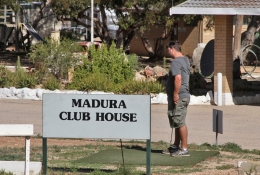 Yes, they do have a sense of humour. There is no Club House at Madura. Just a sign ... and a tee. 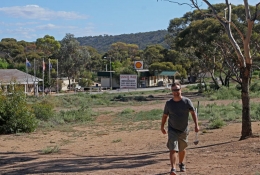 Walking up the fairway at Madura. 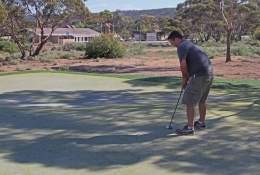 Putting for par on an easy par three - if you hit the green with your first shot.