Town famed as a one-time centre of sugar beet production

Maffra is an important rural service centre which historically was a hugely important supplier of sugar from sugar beet but today is at the heart of one of Victoria's richest dairy industry districts.

Maffra is located 222 km east of Melbourne via the Princes Highway. It is 26 m above sea level.

It is believed that Maffra comes from Mafra in Portugal. There was a property on the Monaro Plains, where both Angus McMillan and Lachlan Macalister came from, named Maffra. The town simply adopted that name.

Maffra's Historic Buildings
Maffra’s main thoroughfare is Johnson Street, a street noted for its broad and attractive tree-lined median strip. An easy walk down the main street starts at the Court House (1888), now the Visitor Information Centre, and includes the former National Bank (1877), the Maffra and Metropolitan hotels, Fosters buildings , the RSL hall and the World War I Memorial Hall. The World War II Memorial Hall is in Foster Street. Church Street has the Anglican church (1900) with impressive windows and a lychgate, a former Methodist church and the State primary school (1871).

Maffra Sugar Beet Museum
The Maffra Sugar Beet Company was registered in 1896, with capital of £70,000. Building of the factory commenced in the following year and was completed in 1898. The factory refined 500 tons of sugar that year. The Victorian Government took over the factory in 1899 but the factory was not revived until 1910 when farmers involved in the Closer Settlement schemes in Boisdale and Kilmany started to grow considerable quantities of beet.The factory began to make a profit in 1917. In 1919 the Glenmaggie Irrigation Scheme ensured that the beet farmers had enough water for their crops. The prosperity of beet continued for the next twenty years with the highest production occurring in 1939-1940.
World War II wreaked havoc on the industry. Workers went off to war and when they returned they focussed on dairy production. The factory closed in 1948. The machinery was sold in 1953. The main factory building was demolished in 1964. Today all that remains of this once-vibrant local industry is a large brick store beside the Sale Road railway crossing and the wooden office, which has been moved about a kilometre from its original site to become the main part of the Sugar Beet Museum complex. That former factory office and weigh bridge have been converted into the Maffra Sugar Beet Museum (the museum focuses on the local sugar beet industry as well as Aboriginal history, early European exploration, the history of the town and the local dairy industry) which is located on McMahon Drive beside the Macalister River Park, off River Street, and is open 10.00 am - 2.00 pm on the first Sunday of the month or by appointment. For more information check out http://www.maffra.net.au/heritage/musmaf.htm.

Gippsland Vehicle Collection - Maffra Motor Museum
Located at 1a Sale Road the Gippsland Vehicle Collection is open from Friday to Monday from 10.00 am - 4.00 pm, tel: (03) 5147 3223 or check out http://www.gippslandvehiclecollection.org.au. Housed in an old vegetable de-hydrating factory owned by the Murray Goulburn Co-op it is a huge display of more than 160 special cars, motorbikes, machinery, historic vehicles and auto memorabilia. It also has a Dairy Industry display which features milk factory machinery from the last 100 years. The collection is so extensive that it changes every four months. There are also special displays for short periods - they are all advertised on the website.

Macalister River Regional Park and Wetland Reserve
There are pleasant walks around town. The Macalister River Regional Park lies only a block away from Johnson Street (between Johnson Street and the Macalister River - accessed from McMahon Street) and offers a number of walks as well as facilities for picnics and barbecues. Check out https://walkingmaps.com.au/walk/778 for a map and useful descriptions.
On the other side of the bridge across the Macalister River is the Macalister Wetland Reserve (accessed from River and Laura Streets) which has boardwalks and bird hides. It is an impressive bird sanctuary with birds on the Victorian threatened species list including the Australasian Bittern; Glossy Ibis; Little Egret; Great Egret; Nankeen Night Heron; Royal Spoonbill; White-bellied Sea-Eagle and the Painted Snipe. It is also particularly popular with the Latham's Snipe, with numbers as high as 200 being recorded.

Howitt Bicycle Trail
The Sale and District Sunday Afternoon Cyclists website (explains https://sadsacs.wordpress.com/howitt-bicycle-trail) : "The Howitt Bicycle Trail was designed as a round trip, starting and finishing in Sale, with options for cyclists to either complete the entire journey or to only undertake parts of the Trail depending on their level of expertise or time available." Day 1 and 2 are on either side of Stratford with Day 1 being from Sale – Maffra – Stratford : 41 kms of flat terrain and Day 2 – Stratford – Briagolong – Lindenow – Bairnsdale : 84 kms of flat/undulating terrain. For more information check out https://sadsacs.wordpress.com.

Gippsland Plains Rail Trail
This new trail extends from Stratford to Traralgon, a distance of 67 km. It follows the rail line that was opened in 1883 and which, historically, carried timber and sugar beet from the area. It started to be closed in 1986 and the Rail Trail was officially opened in 2005.
The most popular section from Maffra is Powerscourt to Tinamba, a distance of 13 km. There are two sections - Powerscourt to Maffra (5 km) which passes Avon Ridge winery (which has a beautiful garden and an opportunity to do a little wine tasting) and Powerscourt, now a private home which can be seen from the Maffra-Stratford Road. Powerscourt Homestead dates from the 1850s with, as local legend has it, a huge ballroom which was added in 1894 by a farm labourer who had stuck gold the same year and purchased the property. He added the ballroom to accommodate his daughter's 21st birthday party; and Maffra to Tinamba (8 km) which is flat and easy.
Near Maffra the trail is known as The Billabong Trail. It is characterised by dense, green vegetation and a billabong which has a tropical rainforest feel. The bridge crossing the Macalister River offers a wonderful view of the river and sweeping views across to Macalister Park. For a map and very detailed information check out http://www.gippslandplainsrailtrail.com.au/about-the-trail.

Briagolong
Briagolong, which is 22 km north of Maffra beyond Boisdale and Bushy Park, has a number of historic buildings. They all have signs outside explaining their history and importance. The most impressive include the primary school (1873), the Mechanics Institute (1874), the Briagolong Hotel (1880), and an attractive private residence, 'Mount View', with its veranda valances, bay windows, flagstone paving and decorated timber gable boards. This house was built near Freestone Creek in 1872 for Irish immigrant and former police sergeant of the Walhalla goldfields, Michael Feely, who developed methods to increase the proficiency of local dairying. The floor of Australia House in the UK was made of yellow stringybark from the region around Briagolong and local sawmills were used to cut the red-gum paving blocks which once adorned Melbourne's streets.

* Prior to the arrival of Europeans the area around Maffra was occupied by the GurnaiKurnai Aboriginal people.

* The first European visitor into the area was Angus McMillan in January, 1840. He was exploring the area for NSW squatter, Lachlan Macalister, who established a pastoral run 11 km north of present-day Maffra, at what is now Boisdale.

* Later in 1840 Paul Strzelecki passed through the area.

* In 1845 640 acres within Boisdale became a Native Police Reserve.

* John Foster's son, Askin Morrison Foster, constructed numerous buildings on his property, in an attempt to achieve self-sufficiency. He later subdivided the property, adding red-brick dwellings, a dairy factory and a blacksmith's shop for his tenants.

* Maffra began as an out-station of the Boisdale run. The village was founded in the 1850s. The name was derived from Maffra in New South Wales which was, in turn, named by a veteran of the Peninsular Wars, after Mafra in Portugal.

* In 1862 a punt across the Macalister River ensured that the tiny town prospered. It increased the flow of human traffic through the town by providing access to the goldfields.

* The town was gazetted in 1864 and lots were sold that same year. The local Post Office was opened that year.

* By 1866 the town had a post office, two hotels, two stores, a butcher and 20 residents. A Presbyterian Church and a school were built that year. That same year a flour mill opened.

* The Catholic and Anglican churches were consecrated in 1871.

* The town boomed in the 1870s with the building of two cheese factories, a brickworks and a newspaper office.

* A local who became Victorian premier, and Australian deputy prime minister from 1904-1905, Allan McLean, formed a stock and station agency in the town in 1872.

* Boisdale House, with its outbuildings and water tower, was built by Foster in 1892 of handmade bricks. The roof was constructed from Oregon pine and covered with tiles from Marseilles.

* The town was connected to electricity in 1913.

* The Maffra Co-operative Milk Products Company (Maffco) was formed in 1918.

* In 1921 the local butter factory was bought out by Nestle.

* The Macalister Irrigation Scheme (a scheme which dammed the Macalister River to form Lake Glenmaggie and which has resulted in the greatest concentration of dairy farms in Australia) has enabled the town to develop primary industries such as milk production, sheep, cattle, and the cultivation of maize and lucerne, as well as the logging of timber. The Glenmaggie Weir was operational by 1925.

* Maffra had its own artificial breeding centre by 1956.

* The Gippsland Plains Rail Trail was opened in 2005.

There is a local website which had detailed information about accommodation and eating in the town. Check out http://www.maffra.net.au. 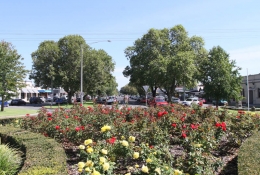 The wide main street of Maffra. 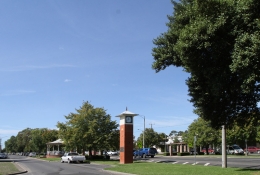 The Band Rotunda and Clock Tower in the main street. 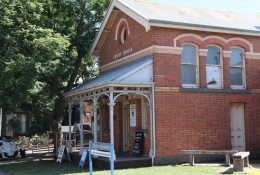 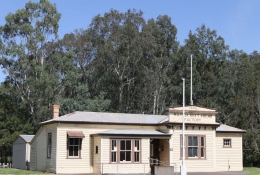 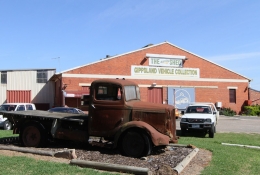