Substantial tropical island off the coast from Townsville

Located 8 km north-east of Townsville (it is officially a suburb of the city) and easily visible from the city, Magnetic Island covers 5184 ha and rises to 497 m at Mount Cook. It has four small settlements at Horseshoe Bay (the island's major residential area), Arcadia, Nelly Bay and Picnic Bay. Some 2533 ha of the central area and western side of the island is now national park. In recent times the island has changed dramatically from a sleepy, out of the way, destination to a chic holiday resort. The sense of it being an untouched weekend retreat and place where fishing, bushwalking and swimming are the main activities has given way to a more aggressive, upmarket 'tropical paradise' image. While the National Park, which covers about half of the island, remains untouched the rest of the island has developed rapidly. About 70% of the island is World Heritage listed.

Magnetic Island is located 8 km by fast ferry (25 minutes) from Townsville and easily visible from the city. Access to the island is by a regular ferry service which leaves from Marineworld in Townsville. There is also a barge which transports vehicles to the island and various charter vessels can be arranged.

When Captain James Cook first sighted the island he called it Magnetical Island because he believed that the ores on the island had affected his compass. Cook's assessment was inaccurate. Subsequent tests have shown no magnetising qualities in the island's predominantly granite boulders. The local Wulgurukaba Aboriginal people called it Yunbenun.

Walking around Magnetic Island
The Queensland National Parks and Wildlife Service have established eleven walking trails on the island. There are about 24 km of tracks, most of them winding through the national park and allowing visitors to see a variety of flora and fauna from hoop pines to the introduced koala. There is a detailed downloadable map at https://www.npsr.qld.gov.au/parks/magnetic-island/pdf/magnetic-island-map.pdf and detailed information about each of the walking trails at https://www.npsr.qld.gov.au/parks/magnetic-island/about.html.

1. Hawkings Point Track - 1.2 km return (1 hour) - a track from Picnic Street in Picnic Bay to a view over Nelly and Geoffrey Bays. It offers exceptional views of Townsville.

2. Picnic Bay to West Point - 16 km return (5 hours) - starts at Yule Street, Picnic Bay and makes its way along the south west coast of the island and offers excellent views of Cockle Bay, Nobby Head, Bolger Bay and Young Bay. The track, which starts near the Picnic Bay Golf Course, is a bush road which runs along the coast. Walkers (the walk takes about 2.5 hours) have an opportunity to explore the island's coastline. This is probably the best place on the whole island to see the diversity of life in a tropical wetland mudflat. There are numerous wading birds, crabs dart across the low tide beaches and mud skippers and mangrove snails abound.

3. Nelly Bay to Arcadia - This track is 5 km long (2.5 hours). It starts at the end of Mandalay Avenue and first passes through a small area of rainforest. The track then moves through the gully of Gustav Creek and rises to offer excellent views across both Nelly Bay (to the south) and Horseshoe Bay (to the north). The track continues to Arcadia. It is ideal for birdwatchers as this is a section of open woodland. Above Arcadia there is an excellent vantage and viewing point at Sphinx Lookout.

4. Forts Walk - Near Arthur Bay are 'The Forts' a series of concrete gun emplacements and observation posts which were built during World War II to protect Townsville in the event of a Japanese invasion. The walk to the site begins at the Radical Bay turnoff and is 1.4 km long. It can be extended to Arthur Bay, Florence Bay and Radical Bay. The longer walk is 4 km return and takes around 90 minutes.
There is a detailed history of The Forts at the Queensland Heritage Register.
"The fort complex was constructed in 1943 to protect the harbour and town from what was believed to be imminent attack as Japanese forces moved south through the Pacific islands. Townsville was the major supply depot for Allied troops in the southeast Pacific and a staging post for troops moving north into the war zone. The fortifications were armed with French 155 mm M3 guns on Panama carriage mounts which were commonly used on a number of Pacific islands as coastal defence weapons. The four guns on Magnetic Island had been enroute to Bhutan until it fell to the Japanese. They were redirected to Townsville to protect its vital port against the expected rapid advance of the Japanese ... At this time the fort was stripped of its fittings and left to return to nature. With the establishment of the Magnetic Island National Park, Queensland National Parks and Wildlife Service assumed control of the complex, installed information signs and pathways and now administers the area." Check out https://environment.ehp.qld.gov.au/heritage-register/detail/?id=600876.

Koalas on the Island
There are few places in Australia where visitors can be guaranteed to see koalas in the wild. Magnetic Island is one of them. It has an estimated population of 800 and, while they can be seen in the most unlikely places (in 2010 one walked into a local bar), they can nearly always be seen on the Forts Walk where they are usually sleeping (they sleep for up to 20 hours a day) in the eucalypts. The Forts Walk Facebook page (https://www.facebook.com/theforts/timeline) has lots of images of koalas which have been photographed by people walking up to the forts.

Cane Toad Races
The Cane Toad Races at the Arcadia Village Hotel (check out http://www.arcadiavillagehotel.com.au/whats-on.html) are held to raise funds for the Arcadian Surf Life Saving Club. The technique is simple. All the cane toads are colour coded (usually with a ribbon) and placed in a bucket in the centre of a circle. When the bucket is lifted the first cane toad to cross out of the circle is the winner. Great fun is had by all and you can bet on the toads. It takes place from 8.00 pm - 9.30 pm on Wednesday night.

Bungalow Bay Koala Village
Located at 40 Horseshoe Bay Road, Horseshoe Bay, the Bungalow Bay Koala Village is primarily a backpacker destination with a wildlife park. There are three presentations each day - 10.00 am, noon and 2.30 pm - and they are very much hands on. As the website (http://www.bungalowbay.com.au/magnetic-island-koala-park-wildlife-tours) explains: "you can wrap yourself in a python, hold a lizard, hold a small saltwater crocodile and get to know the icon of Magnetic Island – the koala. Freshwater crocodiles can also be seen on display." Yes, you can hold a lizard, a crocodie and a python. It is only open for tours. Tel: (07) 4778 5577.

* Prior to the arrival of Europeans the Wulgurukaba saw the island as part of their homelands. Aborigines were regularly moving from the mainland to the island at this time. They came for the excellent supplies of crustaceans (there are a number of shell middens on the island), the fish in the surrounding waters, and a range of animals, fruit and vegetables.

* The island was first sighted by Captain James Cook on 6 June, 1770. He called it Magnetical Island because he believed that the ores on the island had affected his compass.

* By the 1850s and 1860s the island was being exploited for hoop pine, granite and coral which was used to build Townsville.

* Europeans did not settle on the island until the 1870s. The first European resident was named Harry Butler.

* In 1875 the island was nominated as a suitable Quarantine Station.

* The Quarantine Station was built in 1884 at a cost of £3,645. Local Aborigines bartered fish for supplies at the station.

* The early settlers were attracted to the island by its peacefulness rather than any economic value it may have had.

* By the late 1890s a resort had been established on the island.

* By 1900 a low level of 'tourism', encouraged by the construction of a guest house and hotel, had started.

* In 1901 a regular ferry service was operating between Townsville and Magnetic Island.

* In 1912 the Mandalay Guest House was opened. Horseshoe Bay was settled that year.

* Magnetic Island became a popular destination in the 1920s.

* In 1939 the resort on the island was used as a military rest and recreation camp.

* During World War II Townsville was home to 90,000 service personnel.

* In 1942 it was decided to build a Signal Station and Coastal Battery on the island to prevent attack from the Japanese.

* In 1944 a sewage system was established on the island.

* The island was declared a National Park in 1953.

* In 1971 the island was seriously damaged by Cyclone Althea.

* In 2005 the Magnetic International Resort opened.

* In 2012 six hectares of the island was granted to the Wulgurukaba people. 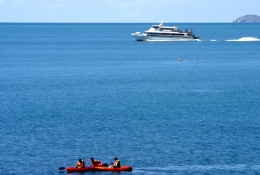 Canoeing as a ferry approaches the island 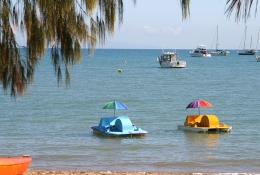 The quiet beauty of Horseshoe Bay 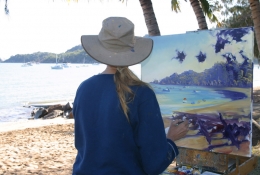 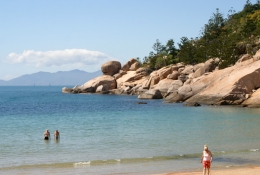 A peaceful morning at Alma Bay 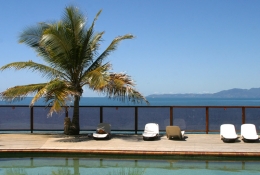 One of the most luxurious backpacker destinations in Queensland 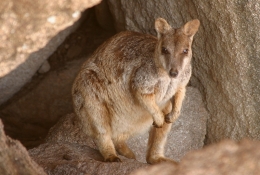 A rock wallaby at Geoffrey Bay 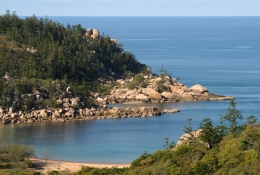 The view from Arthur Bay Lookout on the Fort Walk 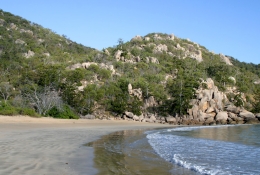 Peace and quietness at Balding Bay 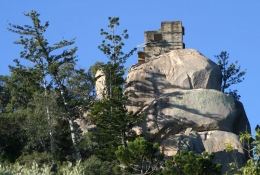 The World War II forts at the top of the island 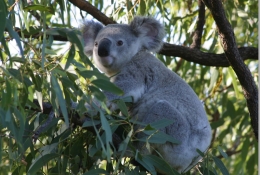 A wild koala on hte Forts Walk on the island 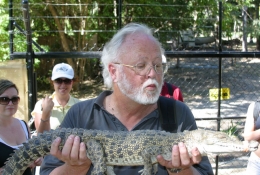