The changing nature of the Yorke Peninsula - once it was economically driven by wheat and copper, now it is driven almost exclusively by tourism - has meant that Maitland, one of the few towns not on the coast, has had to change in order to survive. It has probably been saved because of its central location in the middle of the Yorke Peninsula. If locals in the north see Kadina as their service centre then locals in the south see Maitland as a service centre with a wide main street and a charming ambience with flower beds and buildings dating from the 1870s.

Maitland is located 173 km north-west of Adelaide via the Princes Highway and the Yorke Highway.

The Narangga Aborigines called the area "madu waltu" which probably meant "white flint" but when, in 1872, the town was laid out and proclaimed it was given the name Maitland to honour the wife of an ancestor of South Australian governor, Sir James Fergusson (1868-1873). She was Lady Jean Maitland, the wife of the first Lord of Kilkerran.

An Unusual Street Plan
The town was laid out to emulate Colonel Light's famous design for Adelaide - a series of radiating squares. The inner square comprises Caroline, Samuel, Walter and Alice Streets. The next square is Maitland Terrace, Rogers Terrace, Kilkerran Terrace and Gardiner Terrace. On the outer edge, beyond a square of parklands, are Park Terrace, Tiddy Avenue, Junction Road and Bowman Terrace and beyond, at the edges of the town centre, are North, West, South and Shannon Terraces with roads radiating from the corners in towards the green parklands. Many of the streets were named after members of the Rogers family - the first family in the district.

CYP Maitland National Trust Museum
The CYP National Trust Museum is located on the corner of Gardener and Kilkerran Terrace. It has an important collection of local Aboriginal artefacts. It is open Sundays and school and public holidays from 2.00 pm to 4.00 pm, tel: (08) 8832 2220.

* Prior to European settlement the area around Moonta was inhabited by the Narangga Aborigines whose lands spread across the entire Yorke Peninsula.

* In 1851 the first European settlers, the Rogers family, settled in the area and built Ynoo homestead

* The town was proclaimed and the area opened up for agricultural selection in 1872.

* The Maitland School, now the CYP National Trust Museum, was built in 1877.

* In 1878 there was a flurry of activity in the town with the first race meeting and first agricultural show being held.

* In 1905 the first crop of barley was planted in the area. The Maitland district is now recognised as one of the best barley growing areas in Australia.

* By the 1910s the town, because of the wealth flowing from the production of barley, had a reputation for affluence. It was claimed that Maitland had more cars per head of population in 1912 than any other town in South Australia.

* Today the town is in the centre of rich farming land. The limestone soils are ideal for the growing of barley and wheat and the area enjoys rainfall which is significantly better than the rest of the Yorke Peninsula.

The official site is http://www.southaustralia.com/info.aspx?id=9006436 and there is a local site - http://www.maitlandsa.com

The photograph at the top of the page was taken from the Moonta-Maitland Road by Bret Stevenson, copyright SATC. 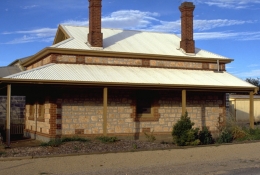 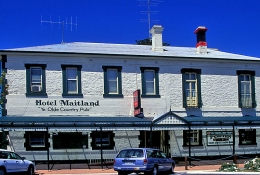 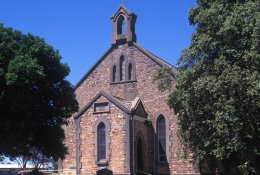