A decade ago Majors Creek was little more than a scattered collection of ruined buildings, churches and a pub. In the twenty first century it has become a desirable destination for retirees and commuters. Seeking a rural lifestyle and a few acres of land, they have found Majors Creek to be idyllic. This has seen the town quietly selling blocks of land and modest, and not-so-modest, houses being built. It still only has a hotel but it is only a matter of time before it acquires a general store and cafe.

The first European settler in the area was Major William Sandys Elrington, a professional soldier, was granted 2,650 acres. He would have liked the town to be called Elrington but when gold was discovered in 1851 the village that sprang up was named after his rank. Thus "Majors Creek".

Elrington Hotel
Sometimes known as the Majors Creek Hotel this historic hotel, which dates from 1913, replaced the original Elrington Hotel which was built in 1856. Over the road is a small park which is ideal for a picnic. The first Elrington Hotel was a two-storey timber building with a galvanised iron roof. It has 18 rooms, stables and water tanks for horses.

St Stephens Anglican Church
Built of handcut local stone by the stonemason, Peter Rusconi, in 1870-1872 St Stephens is a reminder of the prosperity which existed at the height of the goldrush. It stands on the hill above the town and over the road from the town's Recreation Reserve.
Peter Rusconi was the father of the famous Frank Rusconi whose remarkable "masterpiece" (see https://www.aussietowns.com.au/town/gundagai-nsw) - 20,948 pieces of marble - can be seen at the Gundagai Visitors Centre. Peter Rusconi lived in Majors Creek from around 1869 to 1878 and during that time built the church. After the death of his wife he returned to Stabio in the Italian-Swiss border before returning to Australia with his four boys and settling outside Orange.

Gold Mining in the District
The countryside around Majors Creek is still scoured from over half a century of gold mining activities and the interested visitor can still see signs of the mining which scarred the country from 1851 until around 1900. The water races, puddlers, Chinese stone walls, dams, mullock heaps, sluices and tailings are of interest and are reminders of this dynamic nature of the early town. Fine alluvial gold can still be panned in the surrounding creeks.

The Drive from Majors Creek to Araluen
This pretty, but precipitous, 14 km dirt track heads north-east from Majors Creek and drops spectacularly into the Araluen Valley. It offers an attractive entry to Araluen through rich orchards. It was on this road that Ben Hall, Johnny Gilbert and Tom Clarke attempted to hold up the gold escort. At one point (it is signposted) Clarke's Lookout overlooks the valley. It was named after the notorious Clarke Brothers who regularly robbed coaches making the slow ascent from the valley.

The Bushrangers
The discovery of gold at Araluen, and the problem of taking the gold out of the valley via Majors Creek, led to a proliferation of bushrangers in the area. The most famous were the Clarke Brothers, Tom and John, who had been born in the district. Initially the Clarke brothers resisted the temptation to rob the coaches leaving Araluen but the arrival of Ben Hall and Johnny Gilbert, and the combination of Hall with the Clarkes, led to a number of robberies. On 13 March, 1865, on the steep and narrow road from Araluen to Majors Creek (reputedly the robbery took place about 500 metres from the top of the the mountain) Ben Hall and Johnny Gilbert, with the assistance of Tom Clarke, attempted to hold up a gold escort. They shot at one of the guards, Constable Kelly, but they were outflanked by the outriders and were forced to flee from the scene.

The Clarkes were the sons of John Clarke, an Irish shoemaker who had been sentenced to seven years transportation and who arrived in Sydney Town in 1828. He was assigned to work for a pastoralist near Braidwood but, rather than working, he appears to have lived by stealing cattle. When gold was discovered in the district in 1852 John and his sons, Thomas and John Jr, stole the gold miners' horses and then claimed the rewards. Old John reckoned this trade was worth some £250 a year. John’s three sons and two daughters grew up without schooling or religious instruction "in an isolated community little less than a den of thieves, connected either by marriage or misdeeds".

By the mid-1860s the three brothers had established their criminal credentials. In 1863 John was gaoled for a year for horse stealing. In January 1865 James was sentenced to seven years for receiving the proceeds of a mail robbery and Thomas was awaiting trial for assault and robbery when the family managed to arrange his escape. Between October 1865 and May 1866 Thomas Clarke was credited with three charges of horse-stealing, eight robberies including two mails and post offices, the wounding of John Emmett and the murder of Constable Miles O'Grady at Nerrigundah on 9 April. In May Thomas Clarke formed a gang with his brother John and "no more remarkable confederacy of robbery, violence and murder has ever been known to exist in any civilized community".

Failure to catch the Clarke gang led to a public outcry. Special police were sent to the Braidwood district in April 1866 but they were unsuccessful and were recalled. In September that year the Colonial Secretary secretly appointed John Carroll, a senior warder at Darlinghurst gaol, and three others to capture the Clarkes. In January 1867 Carroll and his party were murdered near Jinden station. The crime was credited to the Clarkes and a reward of £5000 was offered for their capture. In March a force of experienced police were sent to Braidwood. On 27 April a party led by a black-tracker named 'Sir Watkin' found the Clarke brothers near Jinden. A Constable Walsh, Sir Watkin and John Clarke were wounded in the subsequent gunfight but the Clarke brothers were captured.

The Sydney Morning Herald reported: "The two captured bushrangers were on Saturday night (the 27th ultimo) taken to Bollaby ; and thence on to Braidwood on the Monday following. A large concourse of horsemen went to meet them as they came into Braidwood, and by the time that they reached the gaol (about half-past 2. p.m.) there must have been at least 300 persons present. The two robbers seemed to be quite indifferent to the awful position in which they were placed, smiling with real or assumed carelessness as they were taken through the town. John Clarke had one arm in a sling, and his horse was held by a constable on either side of him. The elder Clarke was handcuffed, and his horse was also held by two troopers. A large body of police, well armed, formed the escorting party. The journey was performed without any impediment. A little after the party escorting the Clarkes came in the wounded black tracker, Sir Watkin, escorted by a trooper, who was leading his horse. The poor fellow had his arm in a sling, and seemed to be faint and weak from pain; scarcely able to keep his seat on the saddle."

At Nelligen there the “Bushranger Tree” where the Clarke brothers were chained  while they awaited shipment to Sydney where they were executed on 25 June, 1867. The executions effectively ended organised bushranging in New South Wales. There is a long and detailed history of the gang at http://trove.nla.gov.au/ndp/del/article/13143870. It is a story from the Sydney Morning Herald dated 4 May, 1867 - six weeks before they were executed.

* In 1827 Major William Sandys Elrington, a professional soldier, was granted 2,650 acres which he named Mount Elrington.

* In 1831 the Elrington land holding was extended to cover the whole of the area now occupied by the town.

* By the late 1830s the Royds family gave the Reverend W. B. Clarke (an expert geologist) a sample of gold from the district and the potential of Majors Creek was recognised. The rush did not occur at this time.

* In 1840 a village reserve was set aside by Major Elrington. It was named Elrington.

* By 1845 Major Elrington had sold his property and returned to England.

* There was a gold rush in 1851 when alluvial gold was discovered by a Mrs Baxter to the east of the present town. The town was named after Major Elrington - ie Major's Creek.

* By late 1851 there were an estimated 2,000 miners in the district and they were averaging an ounce of gold per person per day. That year a police outpost was established in the town.

* The Elrington Hotel was opened for business in 1856. Alluvial gold ran out around 1856.

* The village of Majors Creek was laid out by Licensed Surveyor, W.C. Larmer, in 1858.

* By 1871 there were five stamper batteries operating around Majors Creek. By the time the town comprised a post office, chemist, 24 stores and 4 hotels.

* In 1969 the local school closed and children were bussed to Braidwood.

* In 2004 the Elrington Hotel was nearly destroyed by fire. 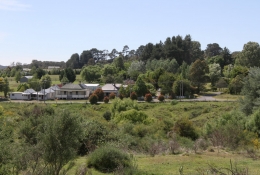 George Street and the few remaining buildings that were once the main street. 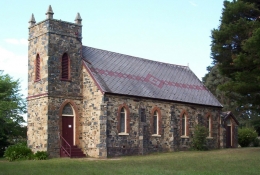 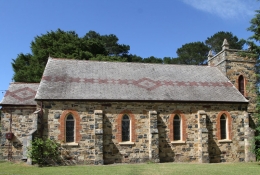 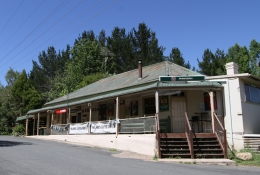 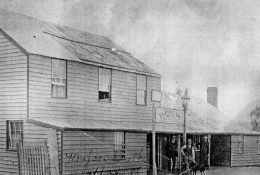 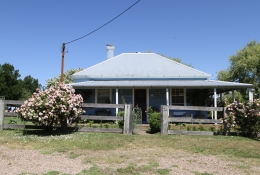 A typical modern house - part of the "treechange" revitalisation of Majors Creek. 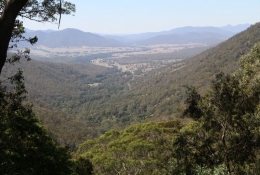 The view from Clark's Lookout on the road down to Araluen. 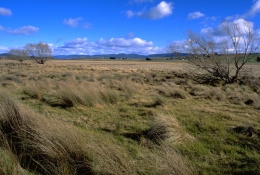