Mallala is a tiny wheatbelt service town which is 41 m above sea level and has an annual rainfall of around 400 mm. It is defined by its distinctive World War I War Memorial in the centre of the town and its attractive old flour mill (now the local museum) and its unusual, lopsided Uniting Church.

Mallala is located 63 km north of Adelaide via the A1 and Mallala Road.

The word "Mallala" is reputedly derived from a Kaurna Aboriginal word "madlola" which meant "place of the ground frog".

World War I Memorial
The smallness of the town is perfectly captured in the First World War Memorial which has the insignia 'In honour of ten men who died in defence of home and liberty'. The men died in France, Palestine and Egypt.
The Monument Australia website (see http://monumentaustralia.org.au/themes/conflict/ww1/display/51115-mallala-war-memorial-/) records: "Mallala War Memorial commemorates ten men from the district who lost their lives in World War One. The monument consists of a globe with the map of Australia as its base, and around the top has plaques listing the names of those who lost their lives.
"Ten gallant men from the Mallala district gave their lives during the war. To their memory a monument has been erected at the junction of roads in the centre of Mallala. The bottom of the edifice is dome shaped, 42 feet in circumference, on which has been reproduced the map of Australia. This sphere rests on a circular step, below which are two wider steps, of Victorian bluestone. The lowermost step is 60 feet in circumference. The superstructure is 10 sided; and consists of a die with plinth, standing on a step above the sphere, all of which, including sphere and step below, is of Sydney freestone. The head of the die is encircled by a band of aluminium, with a panel on each of the 10 sides, each panel giving the name and details of a deceased below. Above the die is a structure of Angaston marble, consisting of a pink marble body, with 10 ornamental columns, each having 10 flutes, with entablature and sloping roof above, having a four-sided cross at the head, with 10 anethemions at the eaves. All except the pink body is in white marble.
"The design and supervision were placed in the hands of Frank H. Counsell, F.S.A.I.A., who arranged a contract with Mr. W. Laycock, while Messrs. Brown Brothers made and fixed the aluminium nameplates. These contracts amounted to about £1,325. In addition to this amount the estimated work of the committee— given voluntarily — was about £350. On Sunday last the monument was unveiled by Lieut-Col. Butler, D.S.O. The Register (Adelaide), 17 October 1922."

Mallala Museum
The town's museum is located between Railway Avenue and  Dublin Road in the old Flour Mill. It contains an interesting collection of local memorabilia. It is open on Sunday from 2.00 pm - 4.00 pm, tel: 0433 820 570 or check out http://community.history.sa.gov.au/mallala-museum-0 for details. It explains, in great detail, that "The Mallala and Districts Historical committee was formed in 1968. Its collections grew rapidly, and in 1970, the District Council of Mallala purchased the heritage listed Old Mill building for the use of the committee as a museum. The State Heritage listed Old Flour Mill, the most prominent building in our town, was erected in 1878. The interpretation of the stories of the local community form a major exhibition space at the Mallala Museum. The southern gallery of the museum, adjoining the Old Mill, houses a range of displays that expand on the life of a small country community. These displays highlighting the local government, business and social activities, and the hardships faced by those who first settled in the area. Photographs, memorabilia and documents detail the families, sport, social and service organisations that formed the backbone of local life. The Old Mill building contains a comprehensive display of the military and service history of the District. Interpretative displays relate the stories of local involvement, from the Boer war, through the two World wars, to the peace keeping activities of more recent times. Of particular interest are our significant displays of the District’s  RAAF connections, which includes the role of the RAAF No 6 Service Flight Training School, and the interaction between the base and the community. The No. 6 Service Flying Training School (6SFTS) was formed at Mallala in 1941 and has had a lasting impact on the township. A total of 2257 trainees passed out before the unit ceased to function on 31 December 1945. Upstairs in the mill building is a wonderful display of home wares and collectibles laid out as furnished rooms, depicting the home life of the 1920-1950s. The Northern gallery and pastoral shed contain the agricultural displays of farm machinery, and includes a blacksmith forge, penny farthing and REO Speedwagon Fire Engine. In the courtyard of the museum the Long Plains School room has been relocated, and now houses the artefacts and archives that tell of the educational history of the district."

Adelaide Plains Parish Uniting Church
Located in Balaklava Road, the Adelaide Plains Uniting Church was originally the Primitive Methodist Church. It is a memorable and unusual church because it is lopsided. It looks as though one of the turrets has fallen off. The headmaster of the Mallala Public School, Mr. Thomas Nevins, gave the money to build one spire but, apparently, no one else gave money for the second spire to be built. A Mr. Bartlett paid for the church bell and other members of the congregation paid £2 for a timber pew which was 9 feet long. People with less money could buy a smaller pew for £1/4/-. The church was built in 1909 at a cost of £650. The foundation stone was laid by Sir Samuel Bart Way, who was the lieutenant-governor of South Australia at the time. See https://mallala.nowandthen.net.au/Mallala_Methodist/Uniting_Church for more information.

St Peters Anglican Church
Located at 25 Aerodrome Road opposite the Primary School, this attractively simple church was licensed in September 1884. The first clergyman, a Rev W.F. Marshall travelled between Dublin, Two Wells, Wild Horse Plains, Port Wakefield, Goyder and Balaklava and, typically, had to travel 50 miles (80 km) on horseback and preach three or four times every Sunday. The congregation has declined over the years and it now holds a service on the first Sunday of each month. For more information check out https://mallala.nowandthen.net.au/St_Peters_Anglican_Church.

* Prior to the arrival of Europeans Mallala was part of the traditional lands of the Kaurna people.

* The first European in the area was Phillip Butler who took up a sheep run in 1842.

* In 1857 Butler took up more land  which he called Mallala Station.

* By the 1860s the area had been subdivided and a substantial number of sheep and wheat farmers bought land for £1 an acre.

* The town prospered and a large, and beautiful, flour mill was built to process the local wheat harvest in 1878.

* In 1909 the Mallala Methodist Church was opened.

* The World War I war memorial records ten men from the town being killed. It was dedicated on 15 October, 1922.

* In 1925 the town was approved for subdivision.

* In 1939 the RAAF Base Mallala - a flying school was established in the district. Suddenly the town had a population of over 2,000 people.

* After the war the buildings were used for newly arrived immigrants from Europe.

* In 1961 the Mallala Race Circuit was opened

There is a useful local website. Check out https://mallala.nowandthen.net.au/Main_Page. 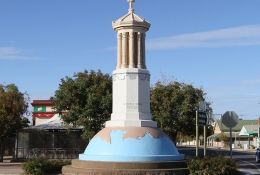 The ‘In Honour of Ten Men” World War I war memorial 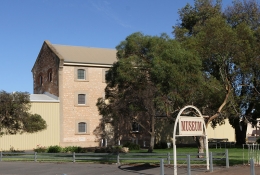 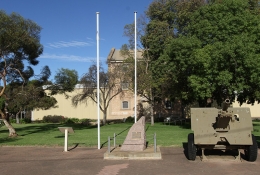 War Memorial guns and plaques outside the Mallala Museum 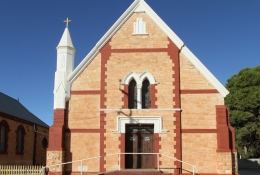