Malmsbury is a small township which stretches along the Calder Highway 96 km north-west of Melbourne. Like so many of the towns in the area, it was created as a result of the goldrushes of the 1850s and 1860s. It was firstly a stopover on the route from Melbourne to Bendigo and then, in 1858, gold was discovered and a town quickly developed around it.

Malmsbury is located on the Calder Highway, 96 km north-west of Melbourne and 10 km north of Kyneton.

Malmsbury was probably named after James Harris, the third Earl of Malmsbury who was the British Foreign Secretary in 1852 when the gold diggings at Coliban were opened and the area was settled by Europeans.

Railway Viaduct
It is possible, from the south-west corner of the botanic gardens, to see the town's historic railway viaduct. There is a walking track from the gardens. Tthe viaduct which was built in 1859 to carry the Bendigo line over the Coliban River. It is said that 4000 men were employed in the construction of the bridge. The signage explains: "The Malmsbury Viaduct is believed to be the finest example of this particular kind of construction within Australia. It is a keystone construction that is 152 metres in length and consists of five 18 metre spans. The Viaduct's keystone in the central arch was placed on the 25th October 1860. The railway line between Melbourne and Sandhurst (Bendigo) was opened in 1862. The bluestone used for the construction was sourced locally."

Malmsbury Botanic Gardens
Located on Mollison Street next to the Town Hall, the botanic gardens were established on nine hectares of river flats in 1863, largely with flora supplied by Baron Ferdinand Von Mueller, the director of Melbourne's Royal Botanic Gardens. They were elaborately developed with a hedge maze and landscaped islands which were established within a natural billabong (lake) and linked by timber bridges. The sign beside the lake explains: "Like many of the Botanical Gardens that were developed in the 19th Century, the Malmsbury Botanic Gardens were built around a water feature. The lake was originally developed out of a natural low lying area, that was part of the Coliban river flood plain. When completely full the lake will often overflow back into the Coliban River. The bluestone edge around the lake was laid in 1972, this was simply to define the lakes edges and for ornamental purposes. The fountain was constructed in the 1930s from local bluestone, and was recently (1998) restored to its original working order both for aesthetic purposes and to aerate the lake." When completed the gardens became a major attraction but slowly fell into a state of neglect until 1984 when the local community revitalised them. The gardens contain one of only four specimens in the state of the hybrid strawberry tree. The gardens are now edged with poplar trees. They are waterbirds and picnic areas.

Former Wesleyan Chapel
Located at the southern end of town, on the corner of Mollison Street and Ross Street, is the former Wesleyan Chapel which was built in 1865 and closed in 1885. It was subsequently used by the local community as the Albert Hall and is now a private building. In 1916 the Kyneton Guardian recorded: "“As is usual in all mining centers, Methodists abound; and in the old days when mining was booming in Malmsbury many of the miners and their families were warm followers of John Wesley. At first they met for worship in a building which is now the Albert Hall, but as new claims got opened up in-the district the building got too small, and land was secured in the center of the town and a substantial brick building and vestry erected."

St John's Church of England
Located in Brodie Street, St John's Church of England is a fine example of the bluestone which forms such an important part of the building around Malmsbury. The church website offers an excellent overview of the church's history: "The first church service in Malmsbury was held in what was Mr French's store when the Rev'd James Sullivan was then Rector of Kyneton. In 1856 Mr Joseph was engaged as a contractor and the bluestone Schoolroom quarried at Malmsbury was opened by Mr Barton on 12 April 1857. It was used on Sundays and evenings for church purposes and on weekdays as a denominational school. The schoolroom at Malmsbury became too small for the growing congregation so when Bishop Perry visited Malmsbury on 13 October 1859, he discussed with parishioners ways and means of erecting a suitable church. On 21 October 1861 Mr Adamson turned the first sod for the foundations. On 9 November 1861 Bishop Perry laid the foundation stone. Five years after the laying of the foundation stone, and after overcoming many difficulties, the picturesque St John's Malmsbury was dedicated and opened by Bishop Perry on 28 January 1866. The total cost was £3,751. With over 300 people attending the event." For more details check out https://www.kynetonanglicans.org/stjohnsmalmsbury.html.

Primary School
Located at 28 Cameron Street is the town's primary school which was built of coursed bluestone masonry in a vernacular Classical Revival style in 1873-74 with a weatherboard wing being added at the turn of the century. Look carefully and you will see that chimneys, window openings and string-courses (horizontal bands of decorative stone projecting from a wall) are unusual and impressive.

Walking Along Mollison Street
Along the next block, to the left, are the old mechanics institute (c.1862) and post office and a couple of antique shops. To the right are the former Bank of NSW (c.1865) and on the corner of Ellesmere Street is the Malmsbury Town Hall (c.1867) a bluestone building with a rather incongruous brick addition.

The Mill
Head north from the Botanic Gardens, over the river and to the right at 120 Mollison Street is the old bluestone mill which is three storeys high with an additional attic section. It was built in 1856-57 but was destroyed by an explosion in 1862. The current building, which is listed by the Victorian Heritage Database, was built by the Blyth Brothers and was once part of a complex which included a brewery and a chaff mill. In recent times it has been a restaurant and gallery but it is now permanently closed. For more information check out https://vhd.heritagecouncil.vic.gov.au/places/68817.

The Mansions
Located on the corner of Mollison Street and Campbell Street, 'The Mansions' is a fine old bluestone building which was erected in the 1850s as an hotel - the Mansions Hotel. It closed as a hotel in 1914. Over the years it has been a bank, a boarding house, a mushroom farm and a cannery.

Railway Station
Located at the end of Orr Street, the Malmsbury Railway Station is listed by the Victorian Heritage Database which notes that it is significant because: "Malmsbury Railway Station is architecturally significant as a very important example of its group, the 'Carlsruhe' style. This style was a direct derivation of the 'English' style, a type of railway station design typical in England during the 1840s and 1850s, which was based on classical planning principles and details. The station is consequently a key contributor to the character of the Bendigo-Echuca line, and the goods shed enhances the site, particularly due to its large scale. The station complex is a substantially intact example of the architecture of the 'main trunk' lines, and is visually linked with the Malmsbury viaduct, 500m up side of the station." For more details check out https://vhd.heritagecouncil.vic.gov.au/places/677.

Malmsbury Reservoir
Located 13 km south of Malmsbury via Daylesford Road, the Malmsbury Reservoir, constructed between 1866-1872, was built to supply Castlemaine and Bendigo with water. There is a picnic area within a grove of pine trees. The reservoir is stocked regularly with brown trout and also holds redfin. Fishing is allowed from the banks as well as from kayaks and canoes. There are recreational areas with picnic tables and walking tracks. There is a very detailed description of the reservoir at https://www.melbourneplaygrounds.com.au/malmsbury-malmsbury-reservoir#.X0xYIJMzZBw.

Taradale
Located 9 km north of Malmsbury, the gold mining town of Taradale is noted for its historic buildings which date back to the 1850s. The town is noted for its impressive Viaduct (built between 1858-1862) and a picnic area around a mineral spring beside the Coliban River.

Metcalfe Cascades
Located 14 km north of Malmsbury, the Metcalfe Cascades on the Coliban River are a series of cascades where the river runs through a series of rock pools. The larger pools are suitable for swimming and there are suitable picnic tables and grassy areas. Check out https://www.goldfieldsguide.com.au/explore-location/312/the-cascades/ for a more detailed description.

* Prior to the arrival of Europeans the area was occupied by the Dja Dja Wurung and Taungurung Aborigines.

* The first pastoral station was established here in 1837. It became a resting place for teamsters heading northwards.

* In the early 1850s it developed as a food supply centre for the northern goldfields.

* An Anglican school opened in 1855. That year saw a flour mill open.

* The town's Mechanics Institute was opened in 1856.

* Malmsbury was proclaimed a borough in 1861. A second flour mill was opened.

* In 1862 the railway between Melbourne and Bendigo reached the town. The railway station was built that year.

* A townsite was surveyed in 1863. That year saw the town's Botanic Gardens laid out beside the Coliban River.

* A State School took over from the private school in 1872.

* The Malmsbury Reservoir was built in 1874.

* In 1915 it became part of Kyneton Shire Council.

There is a useful local tourism website. Check out http://www.visitmacedonranges.com/malmsbury. 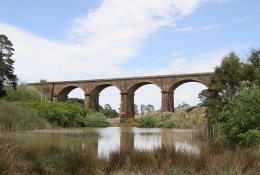 View of the railway viaduct from the Botanic Gardens 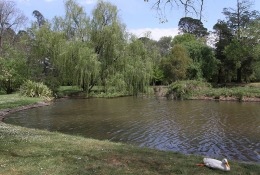 The lake in the Malmsbury Botanic Gardens 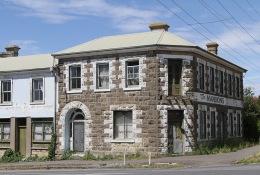 “The Mansions”, a fine example of the use of local bluestone 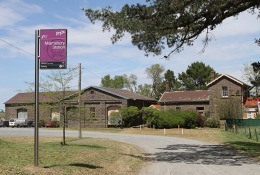 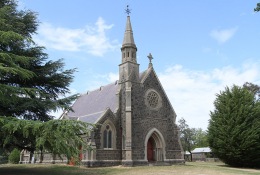 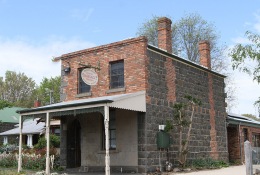 A typical bluestone and brick shopfront in Mollison Street