Mandurah started as a small, isolated settlement to the south of Perth. It wasn't until the 1950s that it started to grow and today it is a commuter belt city for people working in Pinjarra, Kwinana and Perth. In recent times it has also become an important retirement destination. Being only 70 km south of Perth it is a popular daytripper destination with its primary appeal lying in fishing, crabbing and boating.

Mandurah is located 70 km south of Perth via the Kwinana Freeway.

The first European settler in the area, Thomas Peel, named Mandurah after a local Binjareb word 'mandjar' which probably meant 'meeting place' or 'trading place'. There is another possible meaning which is that the town's name comes from 'mandjoogoordap' which means 'meeting place of the heart'.

Foreshore Heritage Walk
Central to the appeal of Mandurah is the delightful Foreshore walk. It can be taken at any time and, usually starting at the Mandurah Visitor Centre, it can include a walk around Administration Bay and Mandjar Bay; a walk through Hall Park to the unusual War Memorial sculpture and Halls Cottage; a time to admire the eight art works around the foreshore (see https://www.mandurah.wa.gov.au/-/media/Files/CoM/Whats-On/Arts-and-Culture/Public-Art-Trail-Mandurah-City.pdf for the total art experience) and plenty of opportunities to have a picnic and just enjoy the charm of the area.
Of particular interest is a free leisurely hour-long walking tour which is held on Fridays and Saturdays at 11.00 am. The tour commences at the Mandurah Visitor Centre and finishes at the Mandurah Community Museum. The Foreshore Heritage Walk ranges across Mandurah's indigenous history, local places of interest, pioneer families, and community art installations. For more information and booking check out https://www.visitmandurah.com/foreshore-heritage-walk-tour-free.

Mandurah Community Museum
Located at 3 Pinjarra Road near the bridge, the Mandurah Community Museum tells the story of Mandurah through photographs and memorabilia. It covers indigenous history as well as European history via oral recordings of the locals. The museum includes such fascinating pieces as a foot-driven dentist's drill and the yacht Canopus which was the last cargo-carrying boat that took farm produce to Perth. It later became part of the local fishing and the fish canning industry and was finally used as part of one of the first tourist-oriented businesses in the region.

Mandurah City Art Trail
There is an excellent brochure and map (see https://www.mandurah.wa.gov.au/-/media/Files/CoM/Whats-On/Arts-and-Culture/Public-Art-Trail-Mandurah-City.pdf) which lists fifteen art works around the foreshore.

Halls Cottage
Located at 7 Leighton Place, Halls Cottage was built in 1833, restored in 1975, and is an interesting example of the earliest dwellings in the area. The National Estate register records that "This vernacular cottage is built of local limestone with a high hipped roof and two verandas, front and back. The interior walls are made of rough untrimmed limestone blocks and rubble held together by lime mortar and lime wash. The interior features pit-sawn floor boards, and open fireplaces. The buildings is typical of the period. The Historical Society has a useful sheet on the cottage. The original owner, Henry E. Hall, was the first person to develop a fishing industry in the Mandurah district." It is open Sundays 10.00 am - 3.00 pm, tel: (08) 9581 2292.

Christ Church and Grave of Thomas Peel
Located on the corner of Pinjarra Road and Sholl Street is Christ Church which was consecrated in 1871 although the presence of an Anglican Church in the district goes back to 1829.  The earlier church, a bush hut owned by Thomas Peel and known as Peel's Chapel, was destroyed by fire in 1869. The cemetery in the grounds surrounding the church includes the grave of Thomas Peel who is recognised the first European settler in the district. Near the church is the anchor from the James Service which was wrecked off the coast on 31 July 1878 with the loss of life of all passengers and crew. Many of the bodies which were washed up on the beaches in the area are buried in the church cemetery. The Heritage Council notes of the building "The church was built from local limestone and now has an orange tiled roof. The original church was rectangular with a porch at the west door. An archway was built into the east wall to frame the entrance to a proposed chancel and sanctuary, which were not built until 1955-1956. At this time the original shingled roof was overlaid with tiles to match that of the new extensions. An extension was added in the early 1990s. There is a carob tree on the site that is listed on the Significant Tree Register."

Fishing and Crabbing
Mandurah has some of the best fishing near Perth, particularly around the offshire reefs. Mandurah is also known as 'Crab City' as the estuary is full of blue manna crabs.

* Prior to European settlement the area was occupied by the Binjareb tribe of the Bibbulmun Nation.

* The first European to settle in the Mandurah area was Thomas Peel in 1829.

* In 1850 Mandurah was connected to Perth by a coastal road and a ferry across the estuary.

* In 1893 the railway passed through the area but did not attract new settlers. They preferred good inland pastures to the poor coastal soils.

* In 1894 the Mandurah Traffic Bridge was opened.

* In 1911 a timber mill was established in the district.

* The Mandurah Roads Board was established in 1949.

* By the 1950s Mandurah was a tiny fishing village.

* In the late 1950s the combination of daytripper tourism and the development of Kwinana as a major industrial centre saw Mandurah grow rapidly.

* The town's population increased with the establishment of the alumina refinery at Pinjarra in the early 1970s.

* In 2007 the Perth-Mandurah railway line was opened.

The local council has an excellent website http://www.visitmandurah.com which includes accommodation in the area. 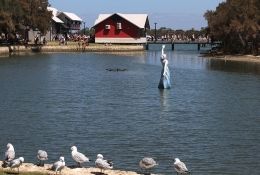 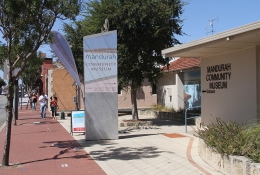 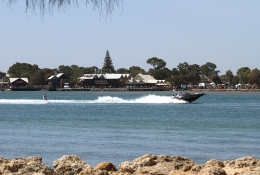 Water skiing near the Foreshore Park 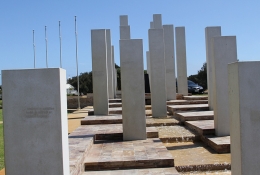 The War Memorial at the end of Hall Park 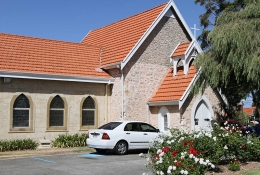 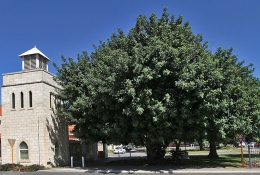 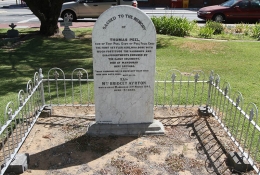 The grave of Thomas Peel in the grounds of Christ Church 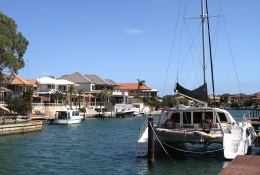 A canal near Halls Cottage on Halls Head 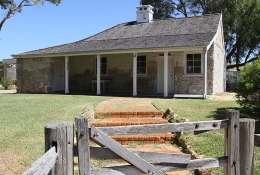 Halls Cottage, dating from the 1830s, in Halls Park